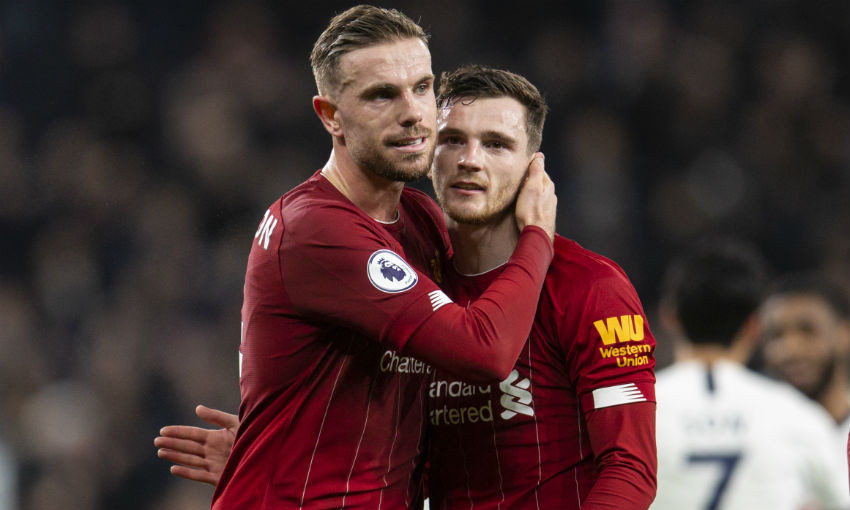 Andy Robertson is expecting an extremely emotional moment when Liverpool finally get their hands on the Premier League trophy.

The Reds secured their first top-flight championship in 30 years on June 25 but will have had to wait nearly a month to lift the actual prize over their heads.

The opportunity to do just that arrives on Wednesday night after the Reds complete their final home fixture of the 2019-20 season against Chelsea.

"We can’t wait!" Robertson told Liverpoolfc.com. "Obviously when we won the Champions League last year you get the trophy in a matter of minutes after the game and then you don't let go of it, so we've had to wait three weeks it will be, but to see Hendo lift the trophy above his head will be emotional.

"It will be all the emotions into one, I think. Seeing our captain lift a trophy that has not been at the club for 30 years will bring joy and happiness and everything along with it.

"Of course we would love the fans to be there to enjoy a big celebration against Chelsea but it's not meant to be and we'll try to make the most of it.

"But the fact that Hendo gets his hands on the trophy is enough for us and we look forward to that game so much, and then we can really celebrate with the trophy in our hands."

It will be the fourth major honour Robertson has held since arriving at the club in the summer of 2017 from Hull City.

The left-back paid tribute to the support and guidance he's received from Jürgen Klopp ever since signing on the dotted line to become a Red.

Disappointing result last night. These things happen in football and we’ll learn from it. But next week the 30 year… https://t.co/apwYdSVyKP

Explaining the manager's belief in him, the Scot continued: "Obviously the faith to sign me, first and foremost, from a relegated club, which probably I don't think I got many Liverpool fans excited about my signing when people like Mo and Ox were getting signed at the same time.

"The manager saw something in me that he could develop into being a decent player and I'm glad he's done that.

"It took me time, [first] three or four months was tough, but my relationship with him was the same then as it is now.

"He still looks to improve me every day in training and he still looked to make be better back then as he does now. So my relationship with him is amazing and long may that continue because he's improved my game, he's improved me as a person and that's what you look for in a manager. So I couldn't ask for much better.

"I don't think any of the lads could and hopefully he's here for many more years to come."

This Tuesday will mark the three-year anniversary of Robertson completing his switch to Merseyside.

Reflecting on the move, the No.26 feels entirely at home both on and off the pitch at Liverpool.

"Any Scouser I speak to, they say Glasgow is very similar to Liverpool and I find that," Robertson said.

"It's been so easy for me to settle in here, to call this place my home is so easy and it's very hard to find that away from your actual home. So I believe I can relate to a lot of Scousers because Glaswegians are very much the same and we are pretty much the same people.

"So that's why I've found my home here, I've took heart being in Liverpool and playing for this club and representing the badge and everything that goes along with it. So I suppose maybe that's why a lot of people can relate to me and I'm happier for that.

"But my relationship with the fans and the city is a very positive one and long may that continue."