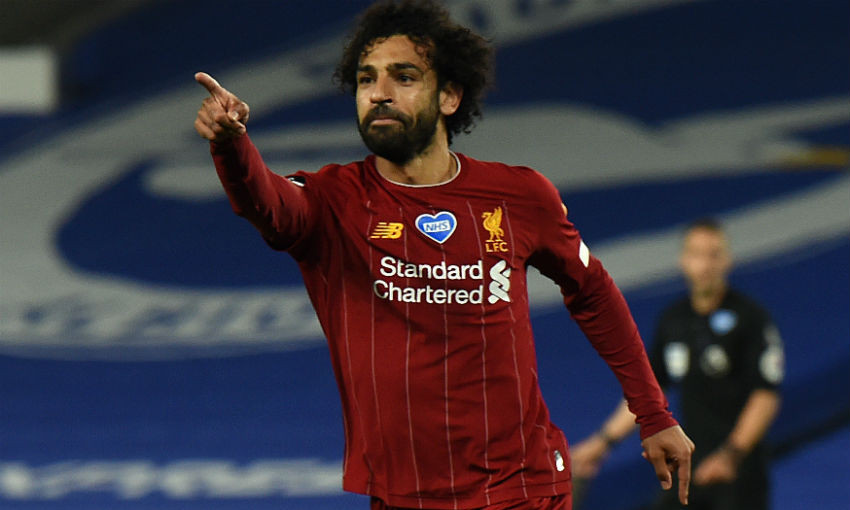 Alisson Becker paid tribute to Mohamed Salah after Liverpool’s No.11 hit yet another statistical landmark on Wednesday night.

A double and an assist in the Premier League champions’ 3-1 win at Brighton and Hove Albion moved Salah onto 100 top-flight goal involvements (73 goals, 27 assists) for the Reds, in just 104 appearances.

With 19 Premier League goals to his name this season, the Egyptian now sits just three behind frontrunner Jamie Vardy as he pursues a third consecutive Golden Boot - a feat previously achieved by only Alan Shearer and Thierry Henry.

“This is Mo Salah, he is hungry,” Alisson told Liverpoolfc.com.

“He is always there fighting for a goal, helping the team on the defence phase as well. He is always there to help win some games for us and ready to fight always for the goal. It’s his job and he loves to do that.”

Jordan Henderson’s fine finish from just outside the box supplemented Salah’s brace at the Amex Stadium, where Liverpool surged into an early two-goal lead before Brighton pulled one back shortly before the break through Leandro Trossard.

The hosts’ front-foot approach meant Jürgen Klopp’s side came under pressure at times and Alisson was impressed by Graham Potter’s team.

“It was a tough match and I think our opponents did really well,” the Brazil No.1 stated.

“They tried to play from in behind and they made some good runs in behind. It was hard work for us tonight but we got the three points and that is the most important thing. The clean sheet didn’t come tonight but we fight for the next one.

“They have a way to play football and we respect that, but we did our job tonight. I think we conceded some chances for them but in a good game and at a good level it is like this, we had the opportunity to score and we had the 3-1.”

Victory represented Liverpool’s 30th in just 34 Premier League outings this term - another record in what has been a near-flawless campaign.

Alisson continued: “We just want to keep doing what we love, what we have passion to do, play football, really good football and enjoying the games that we have now. We just want to be focused on the next match, fighting for the three points.

“Sometimes we don’t even know that we are breaking records and we only know when you tell us! It’s nice of course but it’s not what we are looking for.

“We are looking to give our best on the pitch and then the victories come, the records come - and the most important thing is we are champions.”