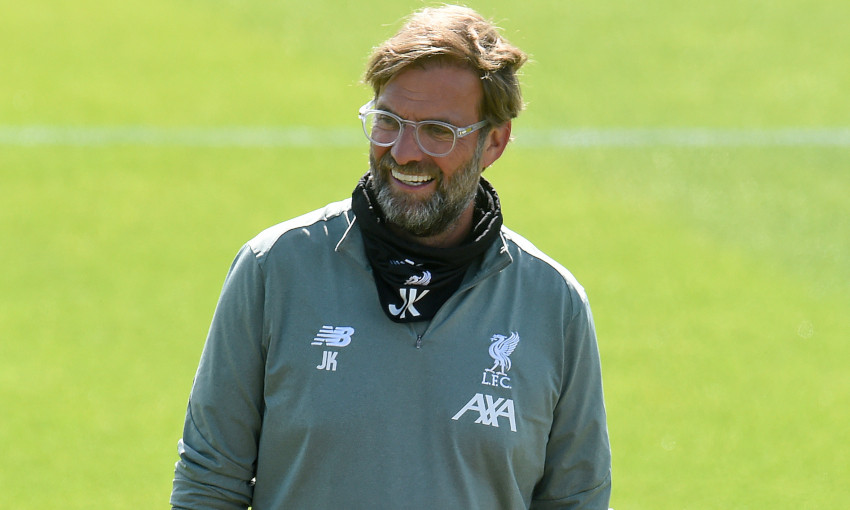 Having Liverpool’s entire squad able to train together at Melwood once again has been a ‘massive, massive lift’, according to Jürgen Klopp.

After the Premier League unanimously voted in favour of returning to contact sessions this week, the Reds have been able to work out with a full complement of players since Thursday.

Indeed, on the same day, the division announced a provisional restart date of June 17 for the competition, meaning Klopp and his team now have a target to tailor training routines towards.

Speaking to Liverpoolfc.com at Melwood on Sunday, Klopp said of being able to have the whole group together: “It’s absolutely brilliant, a massive difference. The weather is just outstanding, it means all the things we have to do outside – we don’t have changing rooms here, that makes it all slightly difficult – but with the weather it’s absolutely no problem, it’s rather nice to do it this way.

“So, we enjoy it a lot. We could work on all the things we wanted to work on. The first week was already really good with the small groups, I enjoyed that as well, because it was just important to get on track again, to get used to the pitch and ball and boots and all that stuff. And now we work on tactical things, that works really well.

“The boys are still the same really good bunch of boys – and that helps a lot. We are in a good moment, we enjoy it. Hopefully we can make progress in the next two or three weeks, there are a lot of things that need to be organised still, obviously. We need to get hopefully a couple of [bits of] information but we take it like it is and use each second we are together.”

Inside Training: The best of Saturday's Melwood session

Despite a return to contact training, social distancing and hygiene protocols remain firmly in place at Melwood, making for a much-changed venue to the one Liverpool voluntarily suspended activity at in March.

One-way systems, temperature checks on arrival and strict measures on access to the various areas of the facility are just some of the health and safety procedures that have been implemented.

“It’s [been] a massive organisational challenge, to be honest,” said Klopp. “What Ray Haughan did in that department is unbelievable – where we can park, where we can walk and all that stuff.

“When you make the step from 10 players of two groups of five, to nearly 30, that’s massive. And we still have to stick to the same things. So, we are fully concentrated when we come in here, let me say it like this; that we do the right things, that we get the temperature tested and all these things. It’s not like it usually is.

“It’s completely fine but it’s just when you come here it’s not like, ‘Yippee!’ – you think, ‘Where do I have to drive, where is somebody who gets my temperature?’ and all that stuff. That’s how it is in the moment.”

Speaking to Liverpoolfc.com last week, Klopp described the period as being similar to a pre-season schedule in terms of the training work being done with players to raise their match fitness and sharpness.

“We don’t have to be match-fit now,” the manager reiterated. “We try it with increasing intensity, day by day, but we have to be fit on the 19th or 20th, whichever day they will give us against Everton, I think. That’s the moment when we want to be at 100 per cent.

“It’s roundabout three weeks until then, that’s good. We want to use that and we will. It’s our pre-season; how I said, we don’t expect a long break in between the seasons, so this is a very important period for us. We never had nine weeks without football training in our lives – since we played football, pretty much. That’s all different but interesting as well.

“We enjoy the situation, that’s really all good. And it makes all the difference for us, to be honest, to come together and have this hour or two here together. You get this contact, feedback as well on the pitch directly, not via a computer or a screen. It’s a massive, massive lift.”

With the Premier League set to confirm the division’s fixture schedule in due course, Klopp highlighted work that will need to go on away from the training pitches at Melwood to arrange the team’s logistics for the restart.

“That’s what we were all waiting for,” Klopp said of the news of the provisional restart. “But now it’s always like this. You were waiting for that, somebody tells us we could start, that’s good. Now we know, from a training point of view, what we have to do when and when we have to be at 100 per cent in the best way, how we can train in different intensities. That was very important.

“Now, of course, it’s more and more interesting when we play where, the times are really important because we will see how we can organise the travel stuff. So, the situation keeps us busy, that’s absolutely OK.

“But on the pitch everything is fine, that’s really great. Around, we organise it as good as possible and use the situation.”