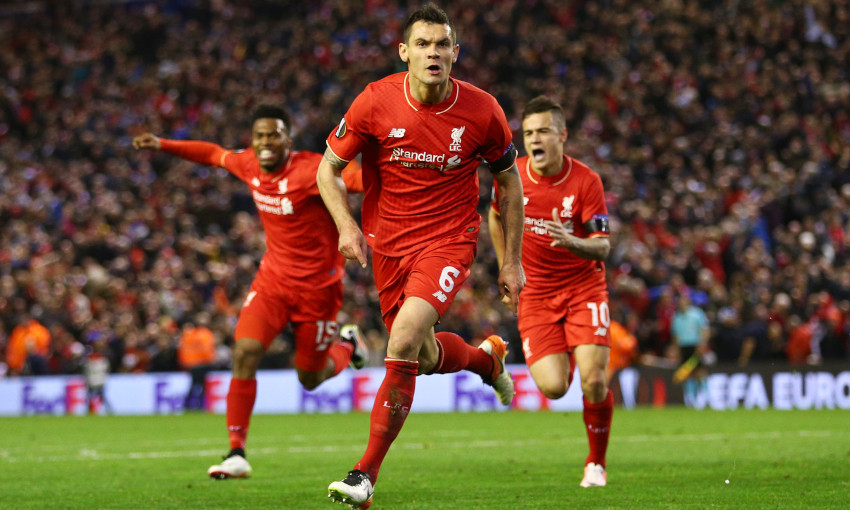 The ‘incredible’ ending to Liverpool’s 4-3 victory over Borussia Dortmund on this day in 2016 was a key step in the team’s evolution under Jürgen Klopp, explained match-winner Dejan Lovren.

The Europa League quarter-final between Klopp’s current and former clubs was delicately balanced ahead of the second leg at Anfield following a 1-1 draw in Germany the previous week.

But Dortmund punctured the Reds’ hopes of moving into the last four when Henrikh Mkhitaryan and Pierre-Emerick Aubameyang netted inside 10 minutes, before Marco Reus restored a two-goal cushion after Divock Origi had struck.

Further goals from Philippe Coutinho and Mamadou Sakho hauled Liverpool level but with the tie heading into added time the visitors held the advantage on away goals.

James Milner and Daniel Sturridge worked a free-kick from deep and the former’s lofted delivery was accurately nodded beyond the goalkeeper by Lovren to snatch a result that has taken a special place in club history.

“Incredible, no? Four years have passed so quickly, but the moment will stay forever. That’s what is important,” Lovren told Liverpoolfc.com on today’s fourth anniversary of the thriller.

“A lot has happened in the meantime – altogether everything was positive. I’m happy that I’m still here and I’m quite happy that there is still a lot of people remembering this moment. I think it will stay a moment forever in the history of Liverpool Football Club.”

Only a privileged few ever experience scoring a goal in front of the Kop. Fewer still hit the target with an effort of such drama and magnitude.

Just how did it feel, then?

“There are a lot of emotions when you score in front of the Kop,” said Lovren. “You saw the eruption.

“You’re proud of the team and what we did until the last moment; we were losing 3-2 in the last 15 minutes and we changed it so quickly.

“When I scored, I wanted to jump out of my skin, to be honest, that’s why I jumped and landed on my backside! I didn’t feel anything… if I did this now, I think I would have pain in all my back! The difference is the emotion.

“It’s a moment I will never forget. It’s one of my favourite moments.”

There are clear parallels between that April 2016 night and the scenes that unfolded a little over three years later when Liverpool beat Barcelona 4-0 at Anfield to overturn a three-goal deficit from the first leg.

And Lovren agrees an important line can be traced from the comeback against Dortmund through the subsequent journeys to three European finals in four seasons – and last year’s Champions League triumph.

“A lot has changed, to be honest, from four years ago,” said the centre-back. “That was one of the key moments for us for the progressive mood. We started to play almost every final – maybe we didn’t win it – but we really raised the bar after that.

“It was a positive thing that we had this game and after that it happened again: Barcelona. We learned a lot, we grew a lot as a team. Of course, there has been some changes but the core of the team always stayed there.”