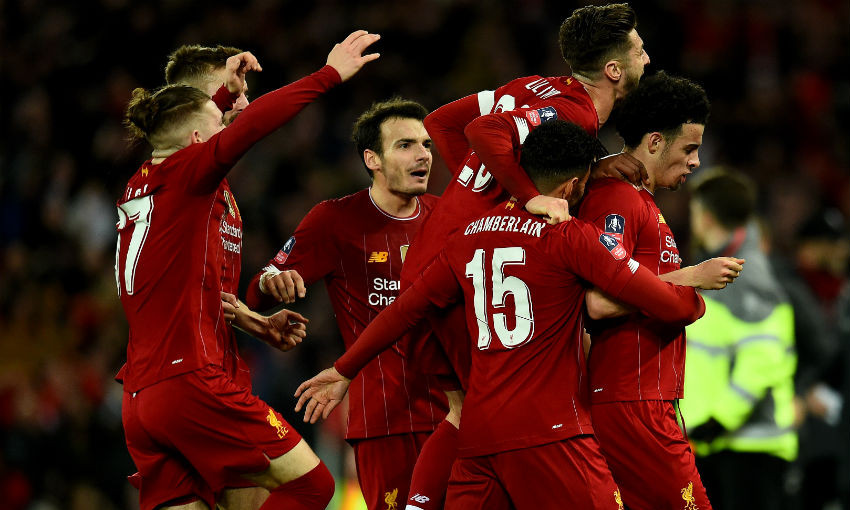 “They won every first ball, every second ball, ran forward and ran back and they did that better than us,” Wilder said post-match. “I love everything about them. The physical and mental part of it is amazing.”

Victory - earned by goals from Mohamed Salah and soon-to-be-crowned 2019 CAF African Player of the Year Sadio Mane - ensured Liverpool would go an entire calendar year unbeaten in the top flight.

Focus then quickly switched to the FA Cup and a third-round meeting with Everton at Anfield; a tie a much-changed home team, which included debutant Takumi Minamino, won thanks to Curtis Jones’ sublime goal.

“I think for me, being a young lad, a local lad and playing for the team that I love and the fans that I love, it’s massive,” beamed the teenage Scouser afterwards.

Next time out - and not for the last time in January - Roberto Firmino would settle a tough away game in Liverpool’s favour.

The No.9 struck to secure a 1-0 victory on the Reds’ maiden visit to the Tottenham Hotspur Stadium; a fixture that preceded a 2-0 success over Manchester United at Anfield.

Virgil van Dijk’s thumping header put Jürgen Klopp’s side in front against their arch-rivals, before Alisson Becker - fresh from scooping the 2019 Samba Gold award for the best Brazilian player in Europe - assisted Salah for a late second that led to unforgettable scenes of celebration.

A trip to Molineux followed, with Firmino again decisive after Raul Jimenez had equalised Jordan Henderson’s opener. This time, the forward’s thumping late finish earned all three points as the Reds made it 40 Premier League matches without defeat.

And, having first been held to a 2-2 draw at Shrewsbury Town in the fourth round of the FA Cup, Liverpool completed January with yet another league win as West Ham United were dispatched 2-0 at the London Stadium.