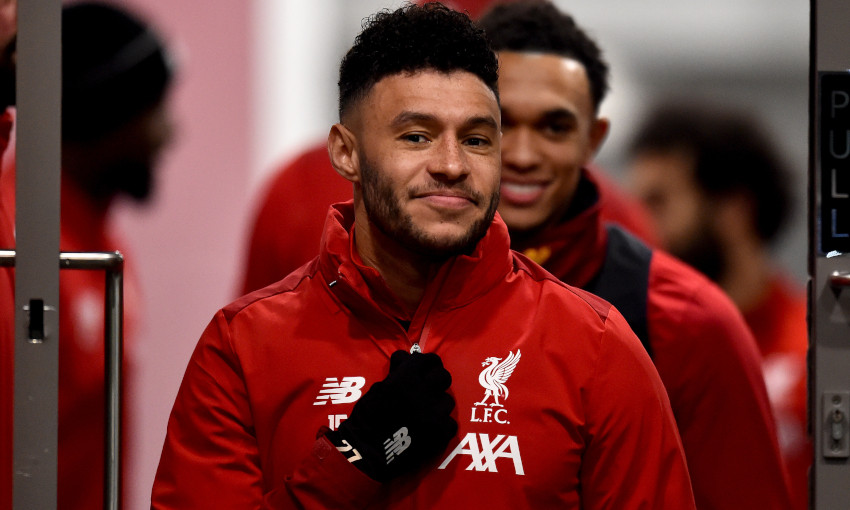 Alex Oxlade-Chamberlain wants to 'take responsibility' on the pitch for the added meaning of Liverpool's next Premier League task: Sunday's clash with Manchester United.

The Reds welcome Ole Gunnar Solskjaer’s team – the only side to have denied them victory in the Premier League so far this season – to Anfield as they aim to continue their charge at the top of the table.

Oxlade-Chamberlain has faced United three times before in Liverpool colours, including an influential appearance from the bench when they drew 1-1 at Old Trafford last October.

And the midfielder believes Liverpool’s players can, and have to, show their understanding of the special significance the game holds for the club and its supporters.

“Of course, it’s massive. There’s a lot of history in this fixture,” Oxlade-Chamberlain told Liverpoolfc.com during a pre-match chat at Melwood.

“Bragging rights are always nice, but at the end of the day, the main thing is making sure your team is more successful than the other – picking up results, finishing higher in the table and doing as well as you can as a club.

“For us as players, you can’t not get drawn into the meaning of it to the fans because they’re the people that support you all year round. So, we buy into that and as a player you sort of take on that rivalry and it becomes your own rivalry as well.

“It means a lot to us as players as well and how much it means to the fans, we take responsibility of that and making sure we can get the right result for them and for us as well.”

There is a shared feeling of anticipation among the squad, too, with a healthy respect for the visitors serving as a guarantee their own lofty position will not distract from the job at hand.

“These are the games you all really look forward to,” continued Oxlade-Chamberlain, who came into the starting XI for last Saturday’s 1-0 win at Tottenham Hotspur.

“They’re the ones that tend to be the hardest, obviously the quality of the opposition, how big a club they are, and obviously the meaning for the fans and what this means to this club. To be fair, both clubs obviously.

“As a fixture it adds a little bit more heat to the game. All of that combined, it’s obviously a big game. They’re the ones you look for and want to step up in and prove yourself and have a good game and get the right result.

“If they come early in the season, they’re the kind of games that you think, ‘Right, we can make a statement here and get the ball rolling and find a bit of momentum.’ That’s what you look for.

“The situation we are in now, it’s another big test for us to prove ourselves again and keep the momentum going. We’ve done really well to get ourselves in this position and this is another really big challenge for us to overcome and keep pushing in the right direction.”

Liverpool’s success in each of the 20 Premier League matches this term other than their trip to United means they hold a 14-point lead at the summit before this weekend’s round of games.

And that draw at Old Trafford has no particular influence on the Reds’ motivation for the return clash – despite the disappointment they felt regarding their performance – according to Oxlade-Chamberlain.

“I think there’s always a score to settle in this fixture,” said the No.15. “If you’ve won the last five out of five then lose the next one, that’s going to hurt us or them the most, whichever way you look at it.

“We weren’t happy with the game [at Old Trafford]. On the day, we didn’t play well enough and then I think in the second half we had chances in the last 25, 30 minutes to go and win the game, so we were disappointed we weren’t a bit more clinical.

“Obviously Adz came on and scored a really important goal which on the day gave us a good point and I think at the time, at that point of the season, you don’t look at that as a blot because we didn’t know we’d go on to achieve what we’ve achieved so far.

“So, you can only look at that and maybe say it would have been nice to have got a win there, but if you look at the season as a whole and you go to Old Trafford and get a draw and you’re not happy with that, that puts you in a good place.

“I don’t personally look too much at those things – I don’t want us to lose games, but I don’t look back at that game and think that’s ruined our season.

“But, at the same time, we don’t go into any game not wanting to win, so we’ve always got a score to settle whether we’ve won, lost or drawn the game against the team we’re coming up against previously. It’s just another game and another three points that we want to go and get.”