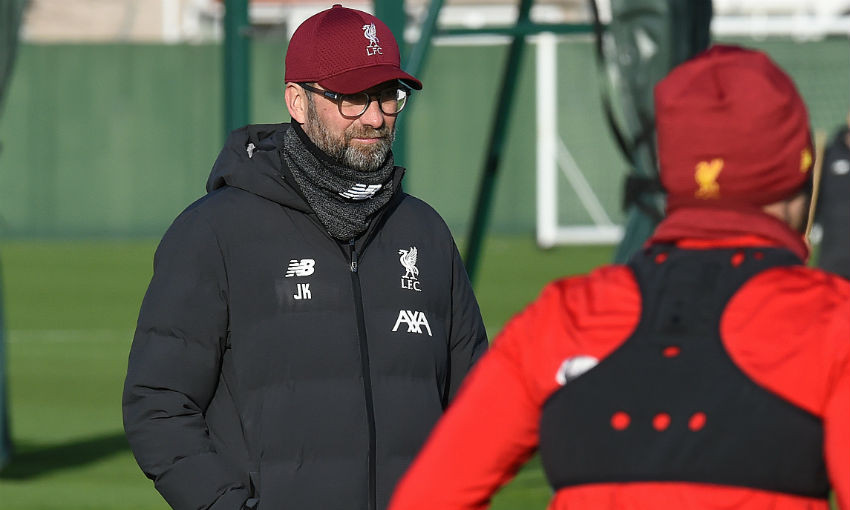 Jürgen Klopp has stressed the need for his Liverpool players to be at their absolute best if they are to secure three points against Manchester United at the weekend.

The Reds host their arch-rivals at Anfield on Sunday as they look to maintain their record-breaking form in the Premier League this season.

But with Ole Gunnar Solskjaer's side the only team to take points off the Reds in the top flight this term, Klopp has outlined what his men need to do in order to pick up victory this time around.

Read on below as the boss previewed the showdown during a press conference at Melwood on Friday afternoon...

On how he views Sunday's game...

It's a very, very important football game. Very important, like games against pretty much all opponents. That's how it is. We have to learn dealing with games like this in the right manner. We did not do too bad in the past but we still can improve. I think the game at United is a good example. We were not at our best in a game where we should be because of the quality of the opponent. We were not bad that day but weren't at our best. We have to make it more likely that we are at our best in a game like this. For this, you have to treat it like you treat all very, very important games for us. The next game is always the most important, so we don't make it different.

We know about how important it is to our supporters. But I hope people understand it, it's like we play against Everton, it's like an add-on for them. We play all our games for our supporters, not only these games. The only reason we do it is because some people brought us together that we play for Liverpool and Liverpool is obviously the natural enemy of some clubs. We have more natural enemies than other clubs have – the reason is our history probably, how successful this club was. But we said it long ago, I said it long ago, we have to write our own history. That means we have to play the games our way and that's what we try. So, very, very important game. It's the most important game of the weekend for us, for sure, so that's the way we want to approach it.

On playing against Solskjaer's side...

I don't know 100 per cent about the results but I know about the games and they were not games like you would imagine when United plays against Liverpool. It's not about how games have been in the past. There have been good times for Liverpool, good times for Man United and there was always one clear favourite and stuff like this, but both teams try to win it. I think in the last two years the away games were especially strange from that point of view. I said it after the game and Ole got confronted with it as well, that I said, 'United only defended today'. I don't know exactly anymore if I said it but probably it's true because I felt it in that moment.

It's strange when you play against a high, high-quality team what United still is, and they play the way they play. That makes life really difficult. We had it now with Tottenham, that's the truth. After 70 minutes, I think we had around 80 per cent possession – that's not normal. How can you expect something like that? On the other side, the counter-attacks are the highest level in the world – that's for Tottenham with the players they have and Man United, for sure, as well. I don't say they only counter-attack, but it's a main thing for them to do. If people want to see that as criticism, I cannot change that. But it's just a description of the situation and that, of course, makes life for us more difficult. If it's an open game then play football – here's space, there's space, stuff like this. But that's the way it is.

On Man United's pace in the final third and how that will inform his tactics...

How it always does. The majority of the time we face teams who are set up like this. We set up like this, we want to be dominant, we have to be dominant. [Against] most of the teams we are dominant, not always exactly like we want but the majority of time we have the ball. That means you have to protect these situations. You have to be as creative as possible. Offensive football only works if you use the full size of the pitch in the opposite half, I would say. That makes you pretty vulnerable in the moment when you lose the ball, so you have to make sure that you don't lose the ball. Or if you lose the ball, you have to win it back as quick as possible. If you don't do that then you have to be protected in the best possible way. That's how football works. The better the team gets, the better the players get, the more important it is that you have this mindset. You cannot only be focused on offensive things.

We respect them a lot. How I said, they're not only a counter-attacking team, that's how they played against us. We made analysis and in all the games they played they are playing build-up, even against Man City. Against us it was 80 per cent long build-up. How can we know exactly how they will set up? Maybe they've now found a specific way to play against Liverpool, but the difference between playing at Anfield and Old Trafford is massive and we want to show that as well. How I said, it's just a football game and there are specific things you have to do. The better the opponent gets, the more consistent you have to [be] on the pitch. This game asks us for perfection, that's how it is. Because how I said, if you lose the ball in the wrong moment and then the train starts going. That's clear but it's about us to make sure that will not happen.