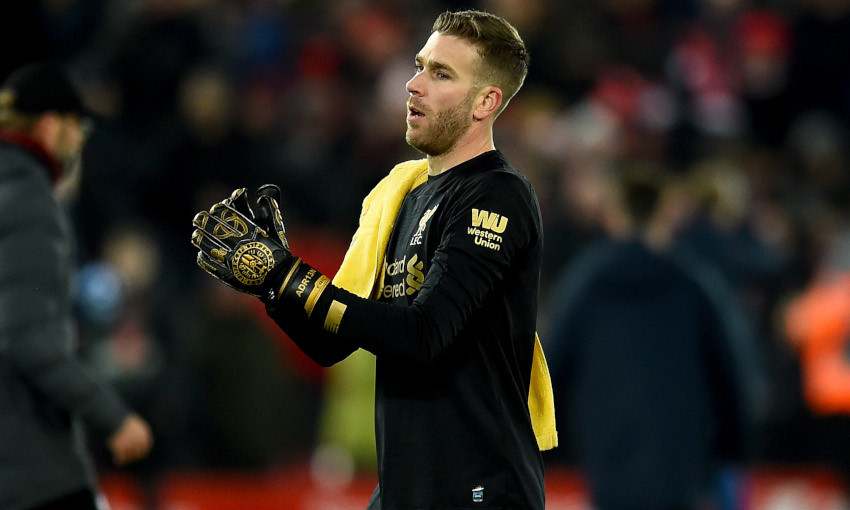 Adrian is aiming to create ‘more special memories’ if he is selected to start Liverpool’s FA Cup third-round tie with Everton at Anfield on Sunday.

The goalkeeper, who celebrated his 33rd birthday on Friday, featured in the Reds’ 5-2 Premier League victory over the Blues a month ago due to Alisson Becker’s suspension.

Jürgen Klopp refused to discuss how his starting XI would look for the latest Merseyside derby when he addressed reporters at a pre-match press conference on Friday; however, if named on the teamsheet, Adrian is aiming to make the most of his opportunity.

We sat down with the Spaniard at Melwood for an in-depth chat ahead of the game. Read on for his thoughts on the clash, as well as what it felt like to mark a birthday as a Liverpool player for the first time, and his aims for the second half of the 2019-20 campaign...

A D R I A N 💪🔴 On his birthday, enjoy a look at some memorable @AdriSanMiguel moments from his time at the Reds so… https://t.co/D6yUIcCRfz

Thank you, I’m 33 but I am feeling like I am 25 again! I’m feeling really well physically and mentally in a great moment, like all the team is living right now, so I am really happy to celebrate my first birthday here with the Reds.

How was it to celebrate your first birthday as a Liverpool player on Friday coming into Melwood?

It is like a family. You come through the main door and everybody knows it is your birthday, like a proper family. It is really nice to have that feeling because we are not just football players. Our jobs are obviously to play football and get points, but we are also human beings and so that’s the most important thing, to feel close to each other.

Is that the kind of thing that helps you know you have an important job to do here, even when you’re not playing – that everyone has a big role to play?

Confidence for players is the most important thing. You feel when players are confident on the pitch, they get more points. When everyone is doing well, playing well, it doesn’t matter – but in the bad moments, when a player needs the support of the others, that’s when the confidence helps and you can feel it on the pitch. Everyone knows each other very well, we are a great dressing room and everyone is supporting each other. We know sometimes we have good moments, sometimes we have not-good-enough moments and sometimes we have tough moments in a game, so these kind of moments is when this togetherness is important and shows that Liverpool and Liverpool’s players are ready for everything.

Is that something you’ve developed in your time here? Being there for others, particularly the other goalkeepers?

We are a good squad, we have a great team and we have good personalities in the dressing room, so everyone has his role. Everyone knows in the moment the manager decides you will play you have to give your best, as we always do. Personally, my position is really hard because just one goalkeeper can play and the others have to support. In the beginning I had my opportunity when Ali had bad luck with the injury, but I showed I was ready. Ali came back to play and I was waiting for my next opportunity. Now we start in a new competition, the FA Cup, so I will give my best to show the manager I can help the team if I am selected. Not just in the dressing room or on the bench, but when he gives me an opportunity I can also help on the pitch.

It is Everton in the FA Cup this Sunday. How much are you looking forward to this one?

Everyone involved in English football knows about the history of the FA Cup and the importance of the competition. It is a totally different competition. It’s not Premier League, it’s not League Cup and it’s not European competition, it is the FA Cup, so everyone – all the teams in England – have the opportunity to play, to show how good they are. Now it’s our round and it’s the best game we have because it is the next one – and it is against a big rival, so we need to be ready 100 per cent for Sunday because Everton will come to Anfield to try to win the game.

You have history with Everton in the FA Cup, of course – you scored the winning penalty for West Ham in a shootout against them in 2015…

It was a really special moment. A bit strange because it is unusual. We [goalkeepers] enjoy when we save; we make saves during the game, we make penalty saves, but we don’t usually score penalties like that day! Maybe it started my relationship with Liverpool – we didn’t know it when it happened a few years ago, but look at now, I am playing for Liverpool! That game was a replay against Everton at Upton Park, everybody had shot their penalties and in the end, the goalkeepers had to shoot. Joel [Robles] missed his penalty and I was really confident, to be fair. I took my gloves off like I was saying, ‘I’ve finished my job in goal and now I am going to strike the penalty like an outfield player!’ It is a great memory, but I hope to get more good memories like this one and to keep enjoying the FA Cup.

The manager hasn’t revealed who will line up for Liverpool on Sunday, but if you are selected to play, will one of your jobs be helping any of the youngsters who might get a chance, given your experience?

We will see what team the manager decides to start on Sunday. We are a good squad, everyone is ready to play and we have had many good youngsters training with us from the beginning of the season. They’ve shown they are doing well, they are more than ready if the manager decides they will play. The most experienced players need to support them and give them confidence. They know the job they have to do, we train every day together and we are confident in each other to play together with the importance of the game on Sunday.

You’re obviously now witnessing Liverpool’s incredible form from the inside – form that has had some describe the team as ‘a machine’. What do you make of the sequences this side are putting together?

We are not a machine, we are human beings – but we have that winning mentality right now. The team has been working together for a few years. When Jürgen came to the club, he started doing many good things. From the end of last season when the team got the Champions League, that mentality has made the team stronger. The bad moment when the team lost the Champions League [in 2018] was really painful, but the year after they came back and won it, then the Super Cup and then the Club World Cup. We are still living the dream everyone started working on a few years ago. We need to enjoy it because we are in great momentum, but we need to keep our feet on the floor. We know we are a long time until we finish the season. Obviously, we want another trophy, to keep going in the Champions League and to start well in the FA Cup. There are many competitions ahead and the most important thing right now is to be together like a good family and fight for everything. We want to fight for all the games we have in front of us.

We need to push each other. The most experienced players, we know the level everyone can give. The manager is the first one that knows to push us because he knows our level. We cannot drop five per cent in a game. When you are winning every time and have that winning mentality, you could have a moment of [feeling in a] comfort zone and this is no good. We don’t want that comfort zone, we want to keep improving every time – and we think we have a good gap to keep improving. You see now that we are top of the table with a gap between the other teams, but that gap could be much smaller, so we need to keep winning games and making more happiness on the pitch.

So, just finally, as it was your birthday on Friday, how would you sum up this last year for you?

The last year started in a difficult moment because, as everyone knows, I was in the last year of my contract with West Ham. I spent a good time there, six years playing for them and I really enjoyed that time. We didn’t have an agreement, so I had to decide to step to the side and continue my career [elsewhere]. We are footballers and we don’t know where we are going to be in the next season or the next one, so we have to make sure we are happy doing our job and I took that decision by myself. It was a long summer with many negotiations with different clubs, with Spanish clubs that called me because I was out of contract, but I think the patience I have inside myself gave me the power to take the right decision and finally I think the best club that could have called me was the club who called me. So, I am here right now, I am enjoying the moment. I am really, really happy to celebrate my first birthday with the Liverpool family, to keep improving in all areas and hopefully keep winning titles with the team.