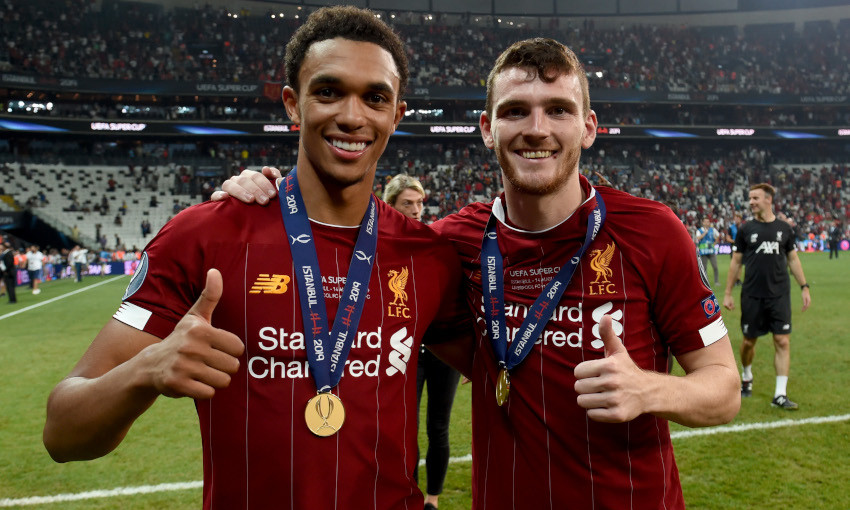 Jürgen Klopp has detailed the importance of the roles played by Trent Alexander-Arnold and Andy Robertson to Liverpool’s attacking prowess.

The full-backs’ contribution towards the Reds’ offensive play was underlined by their recording of 23 assists in the Premier League last season – 12 of which were tallied by Alexander-Arnold, setting a division record for a defensive player.

Indeed, it was the first time two defenders from the same team had ever reached double figures in terms of tee-ups in a single term in the competition’s history.

Their form has continued into 2019-20, with the duo claiming seven assists and three goals between them so far in all competitions.

Asked about their impact on Liverpool’s approach, Klopp told his pre-Manchester City press conference: “That’s part of our game, it’s part of our plan – but it is not the only plan.

“Modern football is like this, that you have to be really strong on the wings, however you do it, because the goal is in the centre of the pitch and the area around the goal is the most crowded area, so you have to find a way to go through – that’s in behind, you pass it on the wings or you try to find little spaces between their lines. That’s how football is.

“Nobody wants to lose the ball because it always gives the opponent the opportunity for a counter-attack, that’s why football is like this. City have proper wings as well, they are pretty wide in their formation, just other players there and they set it up differently to us. We had, from time to time, our full-backs more and more central because we use offensive wingers as well. Everybody who watches our games more often knows that.

“The wider you make the pitch, the bigger the spaces in the centre. That’s why we try, you have to be a force from pretty much everywhere.

“We try to use the skills of the two boys – good crosses, speed, very lively, very brave and very fit endurance-wise so they can do the defensive transition as well.

“They are pretty good players, so they’ve done well so far.”