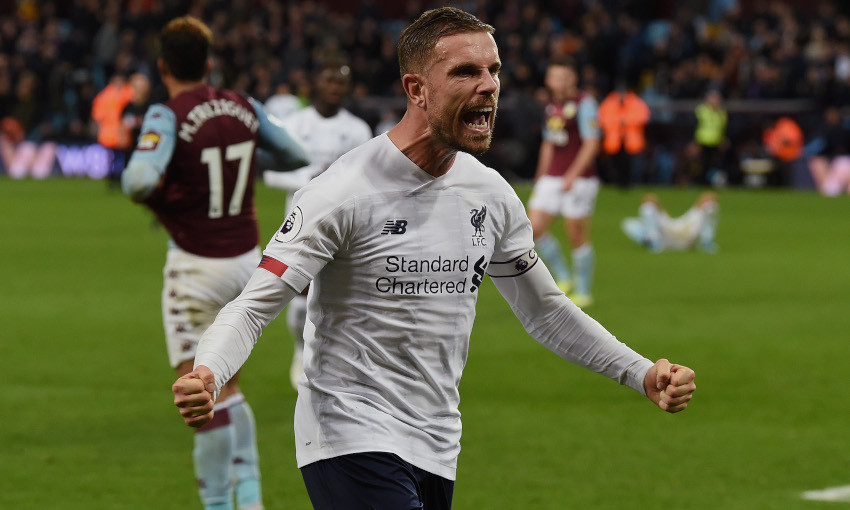 Liverpool's never-say-die mentality is one of the team's most striking characteristics, but Jordan Henderson insists the squad remain committed to challenging themselves to improve by looking at both sides of their comebacks.

The Reds have recovered from losing positions to record victories in each of their last three matches – most recently, and perhaps most dramatically, at Aston Villa on Saturday.

And while the team’s ability to stage such fightbacks is clearly a positive, Henderson has revealed the players are eager to cut out the errors that have led to them falling behind initially in those fixtures.

In his column in the official matchday programme, the captain wrote: “The gaffer’s quote about this team being ‘mentality monsters’ is one everyone likes to jump on and after the weekend at Villa Park it was readily used again in both the mainstream and social media.

“And it’s right, of course. I think one of our biggest strengths as a squad and club at the moment is our ability to never give in and have total belief in what we are doing and that we can turn things around in any game or situation.

“The numbers back up that ‘Never Give Up’ is more than just a slogan on a T-shirt for us – we’ve taken more points from losing positions than any other Premier League team in this moment. Of course that’s a positive, but it’s important we look at the other side of that stat as well.

“Part of being ‘mentality monsters’ is that you challenge yourselves and always look at where you can be better. As a team, do we like the fact that our mindset is ‘keep going and never submit’? Yes, of course. But I would also like to think we’d look at those numbers and set ourselves the task of not putting ourselves in the position in the first place.

“Comebacks make for great television, but it’s on us as a squad to address the issue of falling behind in games. We want to be a side that dominates teams and takes total control of a game. We’ve proved time and time again we can do that, but clearly at the moment we haven’t been doing enough to make sure we are in a dominant position on the scoreboard for longer periods.

“There are many reasons you can find yourselves behind in a game and some of them are beyond your control. The opposition might be on fire and have a player who scores an absolute ‘worldie’. You can also get bad luck, by which I mean a bounce of a ball or a poor decision.

“But the truth is, the majority of the time a team goes behind is because they haven’t done the right things in that moment. And we as a team will look to address that.

“To be clear, this isn’t just about conceding. The issue is from front to back – every single department of the team – in terms of us not being ruthless enough in those moments. In some of the games we’ve gone behind in, we have probably not shown the intensity of play that characterises our best qualities. That’s a team issue, the entire 11 selected to start.

“I think everyone knows and trusts that with this side it is never a case of lack of commitment – that will never be an issue with this group. But it might be other issues that we are all guilty of, such as a slight dip in concentration, making the wrong decision or not taking enough care.

“Regardless, if we really want to achieve the things that we all think we are capable of – as a team and club – we can’t just rest on our laurels and take for granted that we’ll always make the comeback.

“There isn’t a member of our squad who isn’t determined to improve every single day. Part of improvement is being able to identify the correct areas to work on and find a way to address it. That’s one of the most impressive things about this group of players: there is always a desire to improve and a desire to do better, even with the smallest of details.

“It’s nice to get the praise for the comebacks, but we’ll be far more satisfied when we get to the point that the comeback isn’t necessary.”

Jordan Henderson: It was a good night for us but only half the job