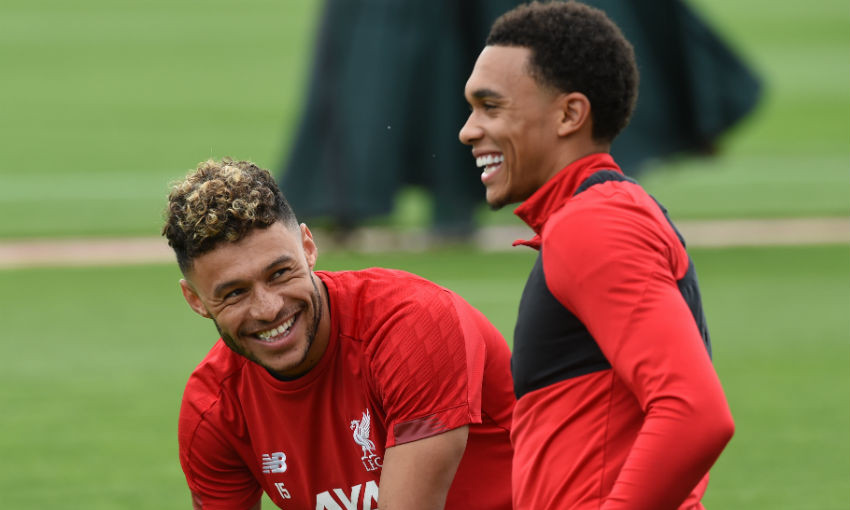 Jürgen Klopp is confident further gains can still be made by Alex Oxlade-Chamberlain and Trent Alexander-Arnold.

Alexander-Arnold is closing in on 100 appearances for Liverpool, with the 21-year-old having made his 99th outing last weekend against Tottenham Hotspur.

Meanwhile, Oxlade-Chamberlain has found the back of the net three times in spectacular fashion in his previous two appearances.

Following his double over Genk last month, the midfielder stressed he could raise his levels even more after such a lengthy period on the sidelines with a serious knee injury.

It was a statement Klopp agreed with when it was put to him during a press conference at Melwood on Friday to preview the trip to Aston Villa.

The boss said: "No, he is right, but it's no problem. That's exactly how it is.

"Somebody asks a question and then a players says, 'Yeah, it doesn't feel that I'm exactly where I want to be'.

"Scoring-wise, can he score better goals than he scored? I'm not sure. Both at Genk were exceptional and that was a real stunner on Wednesday night [against Arsenal].

"There's so many games where he still needs to find rhythm and stuff like this, but it's no problem.

"How I said, for us it's a long-term project coming back from a really bad injury. But it's good that a player thinks like that and doesn't think, 'OK, I scored two goals, so I played world-class'. Because the game has more jobs to do, and he knows that. That's good.

"I'm fine, completely fine with the shape or with the form he is in, but we both know there is quite some space for improvement. That's good news."

Should Alexander-Arnold appear at Villa Park on Saturday afternoon, he would become the fourth-youngest player in the club's history to clock up a century of outings.

Despite achieving so much at a tender age, Klopp insists more landmarks lie ahead for the Champions League-winning full-back.

"A lot. He is so young and already so experienced. It's a wonderful story for different reasons," Klopp continued.

"I know that everybody in Liverpool is desperate for having a Scouse hero making it through to the first team.

"I think Alex Inglethorpe said when he made his first appearance, he said, 'OK, it's good, great, wonderful but it's not about having one game, it’s about getting 100 or whatever'. I think that's what he said and now he can talk about that.

"There was not a lot of bad ones in these 100 games, that's good. I wish for him that he can stay healthy, that he stays fit and then the future is bright for him and for us.

"It's a fantastic story, a great role model. The way he deals with that role exactly is sensational. He's relaxed about that but feels responsible as well.

"I think I said it a week ago, it's really a pleasure to work with him and that's the best thing I can say about a player."