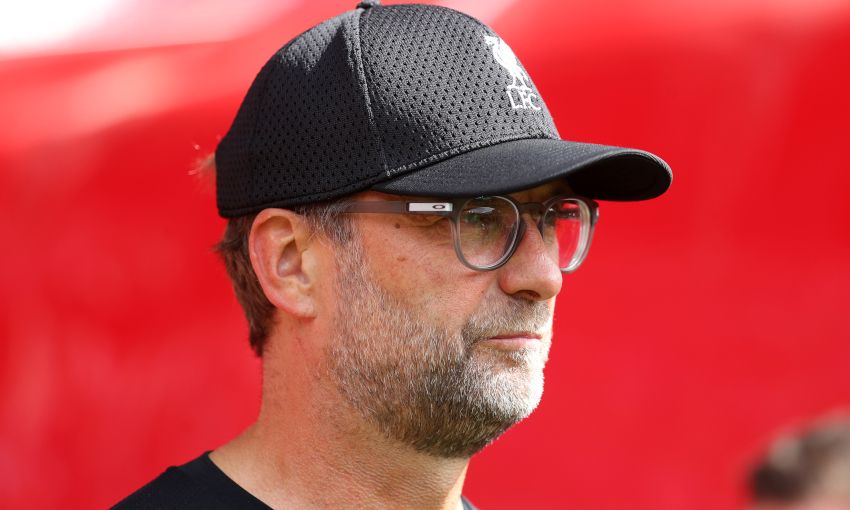 Liverpool must be brave if they are to clinch three points against Arsenal, according to Jürgen Klopp's analysis of Saturday's opponents.

The Reds host the Gunners – the only other side in the Premier League to have won each of their opening two matches – at Anfield in an intriguing early-season meeting.

The last 11 league clashes between the teams have produced 50 goals, though Klopp feels the timing of this encounter in the campaign makes it unpredictable.

That is why the manager will call on his players to be ‘brave, greedy, angry’ and more in the pursuit of a victory against Unai Emery’s visitors.

Asked at his pre-match press conference about the prospect of another goal-filled game, Klopp said: “I wouldn’t expect it, to be honest.

“Both teams are probably offensive-orientated at least, but I have no clue about the result. Arsenal can and will probably change at least two key positions: probably [Nicolas] Pepe will start, which doesn’t make them weaker, and [Granit] Xhaka probably, and they can still make other changes.

“I know what they did in the first two games, I know what they did last year against us, but I don’t know more. We have to make a couple of decisions, which makes us kind of independent of what they do, so we try and each result which gives us three points I’m happy with. I don’t care about how often we score, it’s not the moment for thinking about that. I don’t think Arsenal are doing it like that.

“If you look at their team and how they set up, pretty much each line-up [has] good football players in all positions and real speed up front. Wow, real speed. That makes it tricky to defend it all the time.

“We have to be brave, have to play your own football, you have to try to keep possession, you have to be direct. There are a lot of things to do and consider, against a very strong opponent. That’s why I’m really looking forward to it.

“It’s the early part of the season but these games will come up anyway. Now it’s pretty early and we have to show we are ready again.”

After guiding the Gunners to wins over Newcastle United and Burnley so far this term, Emery joked earlier this week that he would rather not face Liverpool at all in the season.

In the last meeting, at Anfield last December, Klopp’s side recovered from an early concession to register a 5-1 result with the help of a Roberto Firmino hat-trick.

But the Reds boss insists his players can only trouble opponents with their actions during the match, not through what has gone before.

“It’s not what he [really] thinks. He makes a joke and we cannot make a serious question of it,” Klopp replied to a question about Emery’s comment.

“What I said is that we want to be the team nobody wants to play against, but they still have to. It’s not about before [the game] you don’t want to play against us, because we need opponents; it’s about in the game you think, ‘Wow, that’s too much – they are too intense, too quick, too strong, too fast, too greedy, too angry.’ That’s what we want, not what people say before the game – that’s not really important.

“We have to make ourselves ready for the game and have to make sure that at the end people think, ‘OK, that was not a joy for us today.’ The other team thinks that – that’s the plan. But not what they say before.

“It was a joke of Unai Emery and nothing else, that’s why I don’t have to think about that really.”