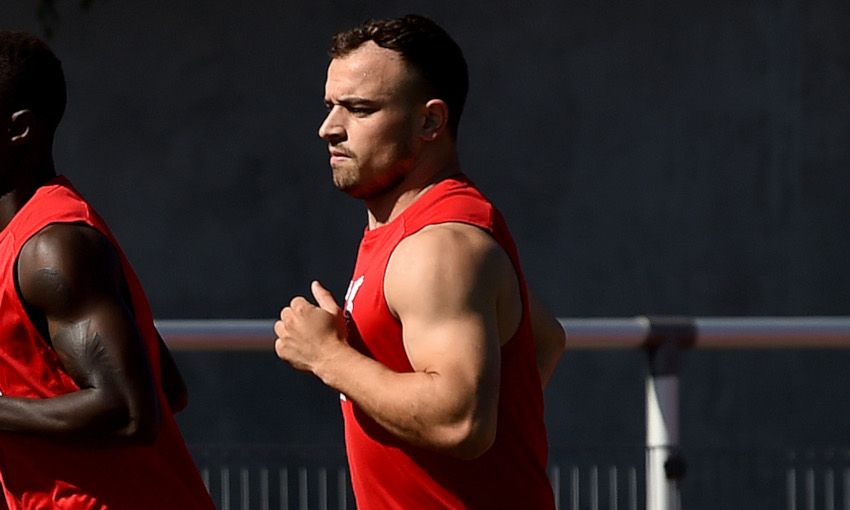 Xherdan Shaqiri is relishing the chance to return to action and play a part in the start of Liverpool’s 2019-20 campaign after overcoming a calf injury.

The forward has resumed training with the Reds at their week-long base in Evian having been sidelined by an issue sustained while on international duty with Switzerland in June.

And now back in the fold, Shaqiri is hopeful of being ready to be in contention for Sunday’s FA Community Shield tie with Manchester City at Wembley.

“I am really happy to be back, finally,” he told Liverpoolfc.com in France. “I had an injury with my national team, so I was doing rehab at Melwood while the team was in America.

“Now I am really delighted to be back, to get started again and be back with the team. I am really happy that finally I am feeling really good and [I am ready] to help my team.

“[Getting injured], this is life and this is football. I am really happy I didn’t miss the start of the season – it’s going to start soon and I am happy to be back before it.

“It’s always nice to see the lads again. They were in America, some of the guys stayed at Melwood, but now we are all together you can see everyone is smiling, laughing. It’s very important to be together and to take our chance this season to achieve a lot of good things.”

After contesting the Community Shield on Sunday, Liverpool open up their 2019-20 Premier League campaign against Norwich City at Anfield on August 9.

And after the achievements of last season, which included a Champions League triumph and a club record 97-point haul, Shaqiri senses a determination within the squad to improve even further in the new term.

“Everybody is really hungry and we want to go again,” he stated. “We need to show everybody we can do it again and try to also be a little bit better in the Premier League than last year.

“It will be difficult to repeat that as it is a tough league, but we have a good team and we want to do better every year and continue to progress.

“We need to be ready, it will be tough but I am sure we can start well.”

Shaqiri’s first chance for action could come on Wednesday night when Liverpool take on Lyon in Geneva – a game you can watch live on LFCTV and LFCTV GO.

“We have to see how our legs are, but until now I can say I feel good,” he said. “The other guys look very good, too, so maybe we can grab some minutes. It would be great, but this is the decision of the manager.”