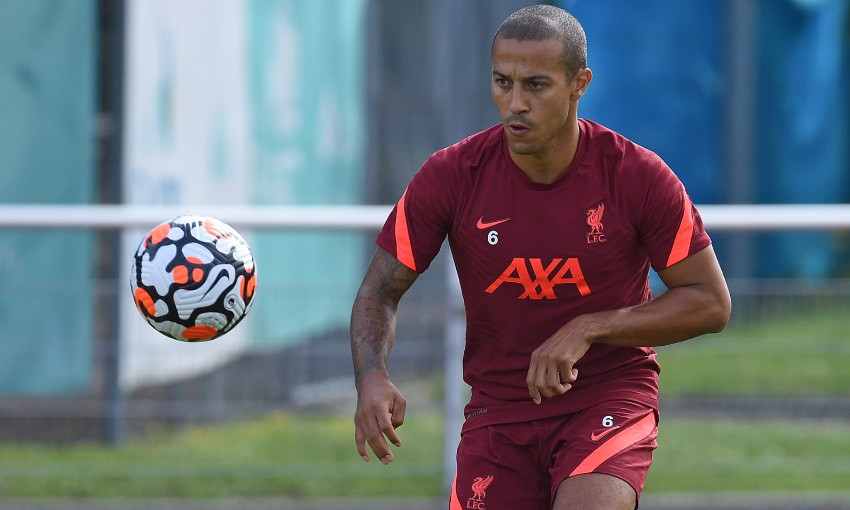 Inside Pre-season: The story of Liverpool's wins over Bologna in Evian

Thiago Alcantara offered a positive update on his fitness as he detailed his ambitions for his second season at Liverpool.

The midfielder, who reported to the Reds' pre-season training camp last week after Euro 2020 with Spain, was forced to miss Thursday's two friendlies with Bologna due to a minor muscle issue.

But speaking to Liverpoolfc.com in Evian on Friday, Thiago revealed he's edging closer and closer to a return to full fitness.

Read on for our interview with the No.6 from the team's hotel in France...

​Thiago, how are you in terms of your fitness?

The last season I started with – from a long time before that – some pain up there in the hamstring, between the glutes, old pain. I was never clean to play because I was always with that pain and there's a point during the end of the last season that I started to feel [it] more and more. And with the national team, even I couldn't sprint in some terms, I couldn't do some actions. So I try to start the pre-season, always in agreement with the medical team, to [do] individual work to clean the area a bit more and to be without more pain. So we are at that point now that we try to take it out and, at the same point, to stay with the team.

Do you feel the benefit from that already?

Sure. I think we will try to reach the first game of the season, for sure.

Have you been able to work on your fitness as much as the other players, or is that something you've had to manage?

Yeah, we have time. We have 24 hours to work individually. So while the team was training in the morning, I was doing my individual training. While the team was resting, I was doing my individual training. So, I have enough time to get fit. The season is so long now and there is some point in my life that I have to be a bit selfish to say, 'OK, stop a bit and be as fit as you can [be] for yourself as well but for your team.' I'm at that point – getting near 100 per cent to bring back all the action for the team.

You obviously joined us after pre-season last season but you've joined partway through this time...

But my pre-season was the Champions League for last season! So when I joined the team I was 100 per cent ready. I just had COVID, had the injury thing against Everton, so it was just a couple of external circumstances.

You've seen the group close up away from home together for nearly a month. What have you made of how they've operated together? There's been a great atmosphere...

It was really great, also the staff did a great job doing ping-pong tournaments and all this stuff. And between us, we finish dinner and we stay longer to talk with each other, to ask some personal questions. I think it was pretty good to spend the time together.

You were also sat on the bench for the games against Bologna. What kind of perspective does that give you on a game?

I wanted to be as close as I could with the team. I couldn't step on the pitch, so I have to be that close to them outside. But you can also hear what the coach wants during the game from the team. It was good to have this feedback as well and also to see the intensity from the game as close as we can after three or four weeks since I played the last one.

You started the last seven games of last season and it coincided with that fabulous run. How pleased were you with your end to the campaign?

I'm never pleased with my performance, I always want more and more and more and more. The minimum we have to give is how we ended with these wins, with these extraordinary moments. But at the end, it was just about pushing because of the situation that we had. We weren't happy enough, so we were pushing to be as happy as we could. But now we start from zero and we want everything, we want to win everything again.

You mentioned extraordinary moments – did last season give you a little taste of what Liverpool can be about?

It was great to have everybody and everything against us, and we did it. Ali's goal was unbelievable, I remember games in Old Trafford that we won without playing that football and it was also good. But it's just experience that you have to say, 'OK, we finished last season playing a game we were not that happy with and we finished third.' So playing as we want and as we desire, we can reach and we can win everything, as I say.

You haven't really had the chance to play in front of your new supporters. How much are you looking forward to playing in front of a full Anfield or a full away end of Liverpool fans?

I was able to play for them in the last game of the season. It was not a full stadium but it was good enough to taste what Anfield is, the energy that the crowd gives to us.

You got your own song within your first week of arriving at the club. How much are you looking forward to hearing Anfield sing that?

At the moment you get shy with it because it's a funny one and there's a video! You get a bit shy with it but then during the game you just hear your name and it motivates you, for sure. In the game you are just focused on what's going on and when you hear the chanting, it's so nice to hear.