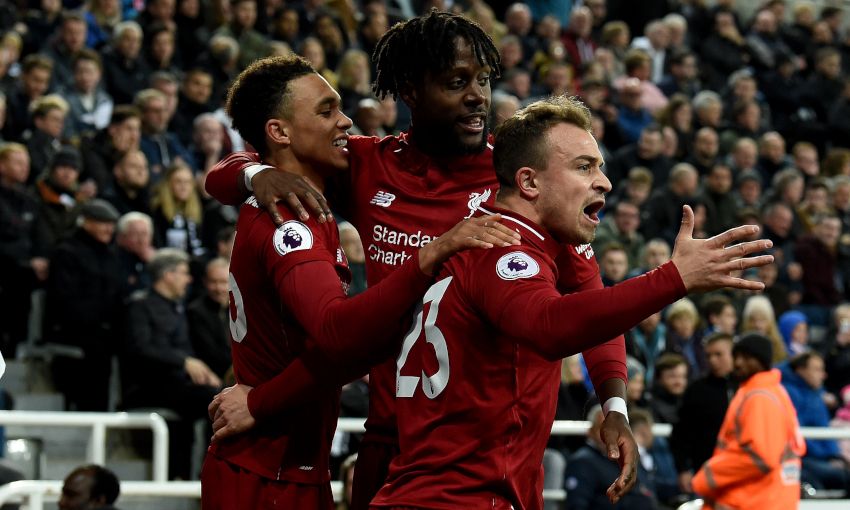 In a season packed with dramatic moments, Divock Origi has claimed his fair share.

The latest may still prove the most crucial of all, with his 86th-minute winner at Newcastle United on Saturday night putting the pressure back on Manchester City as the most relentless of Premier League title races enters its final week.

Rising to meet fellow substitute Xherdan Shaqiri’s free-kick at St. James’ Park, the Belgium international flicked the ball off Jamaal Lascelles and into the net for a crucial 3-2 victory.

The result lifted the Reds back above City by two points ahead of their penultimate league fixture, at home to Leicester City on Monday night.

For Origi, the intervention – reminiscent of his winner in December’s Merseyside derby at Anfield – came by virtue of his aim to play with ‘a big heart’.

“I saw Shaq come on the outside and I always know that he will try to put [a good ball] in,” he explained to Liverpoolfc.com of the decisive incident on Tyneside.

“I just tried to make the run and just flick it as good as possible. It went in and I was just so happy, it’s just unbelievable.

“That’s the thing [with this team]. We’ve shown that we have a big heart and we want to fight for the three points.

“It’s the end of the season, we have a couple of injuries, so we wanted to show everyone that we are just a super team. The fans were behind us and that helped us get the three points.”

Whatever happens when City host Leicester this evening, the battle for Premier League glory will only be settled on the final day of the campaign.

Pep Guardiola’s reigning champions have the advantage but any falter would allow Liverpool to clinch the title by beating Wolverhampton Wanderers on Sunday.

The Reds’ current total of 94 points would have been sufficient to top the table and be crowned champions in 12 of the past 13 seasons.

“It’s incredible,” said Origi. “We can be proud of what we have done up until now and we have to use that to get the confidence to go into that last game and give it everything and try to win it.

“For now, we just have to wait and see what City do and regardless of what happens we still have important games. Anything can happen so we’ll try to make it as special as possible.”