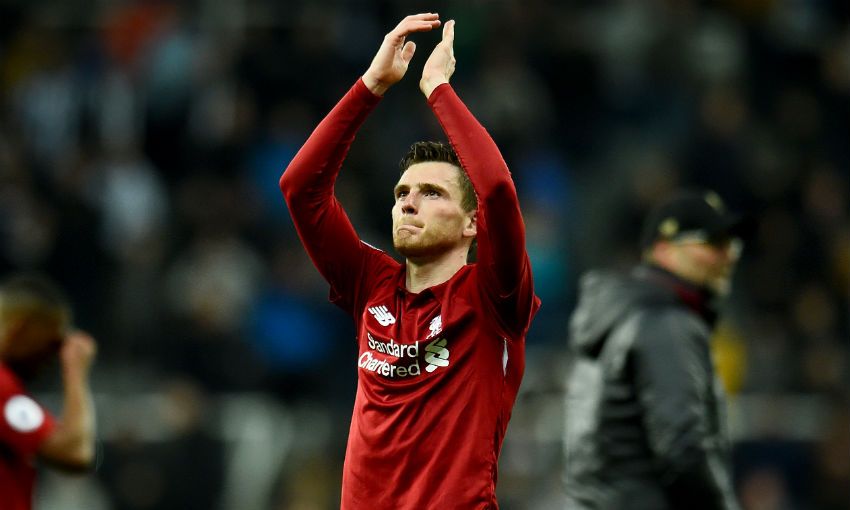 Andy Robertson struggles to find the words to describe the grit and determination of this Liverpool team as they continue to overcome giant hurdles in the 2018-19 campaign.

The Reds showed their defiant side to secure a dramatic 3-2 victory over Newcastle United on Saturday and keep alive their Premier League title ambitions.

They lost leading goalscorer Mohamed Salah to injury midway through the second half at St. James' Park, but his replacement Divock Origi had the final say when he headed in Xherdan Shaqiri's free-kick with four minutes of the 90 remaining.

"We just keep on coming back and we keep on scoring goals. I can't explain it. But if we don't do it next Sunday and City are crowned champions, we can be proud of what we've done, everyone. So we are in there, we've stuck together and hopefully we get 97 points.

"And if that's not enough then we've done everything that we can. It would obviously be gutting but these lads don't know when to give up and that's why these things happen."

Robertson felt the contribution of Liverpool's second-half substitutes at Newcastle typified the quality and first-class attitude of the squad.

The left-back also singled out Daniel Sturridge for praise as the striker started the second consecutive league match in place of the injured Roberto Firmino.

He continued: "First of all, I was devastated for him [Salah] and then when he went off I looked at the clock and thought there was going to be a good bit of injury time if we needed it.

"Fortunately we didn't need it and we needed the whistle quicker! That's football, but how many times have I said that this squad has been unbelievable this season?

"Studge, my word, what a shift he put in, especially the last 10 minutes. He's not really played. Div comes off the bench and scores, Shaq with the assist. His corner just before it was unbelievable and the free-kick was just on the money.

"The lads who have been left at home and lads who are on the bench and haven't come on, they are buzzing for us and there's no egos in this squad and that's why we are where we are today and long may it continue.

"If we do fall short this season we will be back next season and we just need to keep going and keep going, and hopefully get what this club deserves."

Manchester City can ensure the title remains in their own hands ahead of the final day with a victory over Brendan Rodgers' Leicester City on Monday night.

Robertson, however, believes the former Liverpool boss owes him a favour after his switch to the King Power Stadium in February.

"I don't know [if I will watch it]," the Scot concluded. "I've not shied away from the other ones, it's not worked, so maybe I'll try something different!

"Look, if I watch it or don't watch it, it's not going to make a difference. I'm a Celtic fan, Brendan's left us so he maybe owes me one!

"Leicester City are a good team but Manchester City are unbelievable, they've had eight days to recover from a heavy schedule, so we are expecting City to get off to a good start so hopefully Leicester can hold on.

"We won't expect anything but all we can do is take it down to the last game. We've done that so we'll look forward to next Sunday.

"It will be a great occasion regardless but first of all Tuesday [against Barcelona], a hell of a task but if we can get a wee bit of luck then hopefully we will progress."