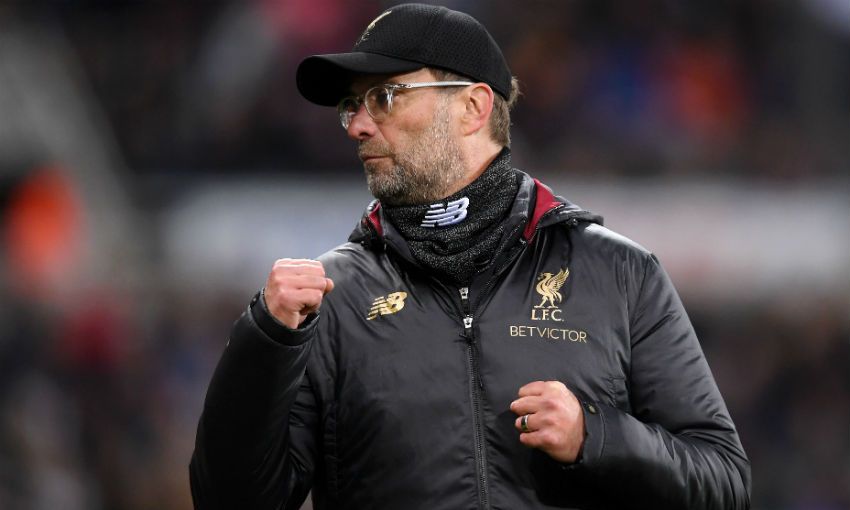 Jürgen Klopp highlighted the perseverance and mentality of his players after Liverpool recorded a late 3-2 victory over Newcastle United at St. James’ Park to keep their Premier League ambitions alive.

The Reds had twice led in the north east through first-half efforts from Virgil van Dijk and Mohamed Salah; however, they were pegged back on each occasion via Christian Atsu and Salomon Rondon.

The visitors then lost Salah to a head injury midway through the second period and the contest appeared to be heading for a draw, until two substitutes combined to secure a vital three points when Divock Origi helped force in Xherdan Shaqiri’s free-kick.

The result means Liverpool return to the top of the Premier League table and, regardless of the outcome of Manchester City’s clash with Leicester City on Monday night, the title race will go down to the final day of the season.

Read on for a summary of the manager’s post-match press conference from St. James’ Park…

On his reaction to the game and the result…

Of course, playing three days ago it was most intense, running-wise we had the highest number of kilometres in Barcelona and then three days later we come to Newcastle and this is obviously not a friendly game tonight. The style of play of Newcastle is not really to defend with tactical moves, it is just a long ball, Rondon is fighting for it and then you wait for the decision of the ref, foul or no foul. If it’s no foul you have to carry on and if it is a foul, it is a free-kick in either direction. That means you cannot do it with a proper formation, you have to do it with legs, with runs and stuff like that - and that makes it even more intense, that’s why it makes sense to keep the ball. That’s what we tried a lot of times, we did it really well in a lot of moments.

I liked the body language, always when we passed the ball around, but around the first goal it was not that good because you keep the ball, but not for keeping it but for creating a situation or a gap or a passing option. In that moment, all of a sudden because the intention was not right, we were under a bit of pressure. We played a not-so-good pass to Ali, a long ball, it comes back, 1-1. I liked the reaction of the boys, I didn’t see any major concerns apart from we conceded a goal, which is not cool.

Our goals were wonderful. The first goal, Pete Krawietz and Greg and James, our analysts, what they do around set-pieces is unbelievable. It is really nice to see. Having Virgil van Dijk completely free in the box is pretty rare, it was a wonderful routine. We scored a second one, nice cross again from Trent and Mo is there. But then they scored their goal and then it is not too long to go anymore, we have to sub Mo, not cool. We have fresh players on the bench, try to have an impact - and they had [an impact]. It was a wonderful free-kick from Shaq and sensational header from Divock and we win the game. We are now qualified for the league final, which is brilliant.

On another vital late contribution from Origi…

So crucial. What can I say? It is just brilliant, it is like a fairy tale. You can say whatever you want about me - they don’t play often enough, Shaqiri not often enough. I make this decision. It is great that they do it, I love it. That was really a big moment.

I accepted long ago that we do everything, absolutely everything, the boys throw whatever they have on the pitch, so that means whether we are champion or not, it is destiny. We do everything and we cannot do more - can you get more than 94 points? Can you get more in all the other stuff? Not really. The boys tried everything, even in the draws, they tried everything to win the games. It is all good. We tried to have influence, so it was clear it didn’t happen for a while with set-pieces, that’s true. We didn’t have them, so in this moment we had one and we used it. I really think it was deserved.

Yes, they came a bit up after 2-2, it is normal. [Newcastle] had no game three days ago, we had a game, so it’s absolutely normal. I really loved how calm the boys still were. The calmness was always interrupted by a long ball for Rondon and then it’s chaos! The ball coming down, you have to collect it or not. On the other side, how many quick re-starts did we have with Robbo on the left side? It is just incredible. When Ali had the ball and threw it there, nobody reacted as quickly as Robbo and Ali. Wow, what a race, what a game that was.

The boys showed in each second they really wanted to win it. We knew what we had to do and the boys did it in a very difficult game. Credit to Newcastle, that was, wow... any people who doubt or whatever that teams don’t play for anything anymore, or maybe are halfway on the beach already, they were really the opposite. Is there any history between Newcastle and Liverpool that I don’t know about? The atmosphere was like there was something that happened in the past. The boys, again, were ready to face it, ready to deal with it and that’s brilliant.