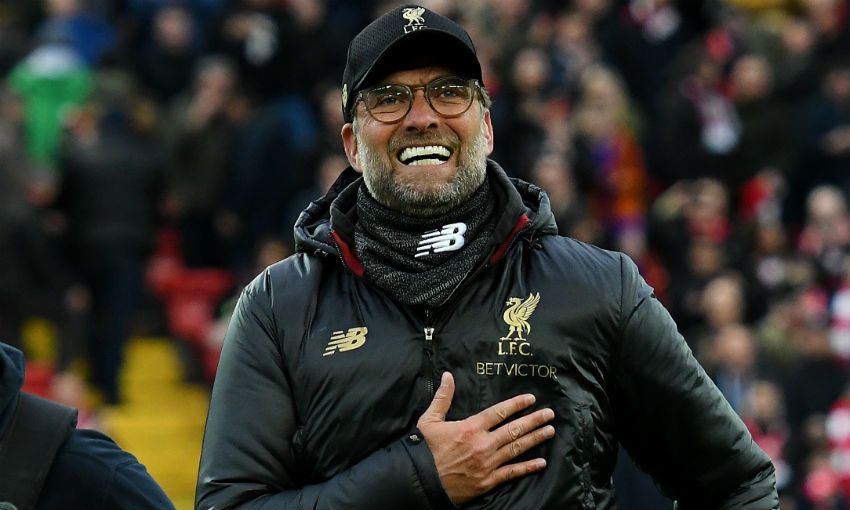 Jürgen Klopp was delighted with the way the Anfield crowd maintained belief in his Liverpool players towards the conclusion of Sunday's dramatic 2-1 win over Tottenham Hotspur.

After Lucas Moura cancelled out Roberto Firmino's first-half opener with just 20 minutes remaining, the Reds were left facing a frustrating result that would see them lose ground to Manchester City in the Premier League title race.

However, the home supporters inside Anfield quickly brushed aside their disappointment and were rewarded with Toby Alderweireld's 90th-minute own goal that put Liverpool back on top of the table.

"For me, when we scored [to make it] 2-1, it was relief as well. It was not like bouncing around and stuff like that," Klopp told Liverpoolfc.com. "It was relief.

"I think first half, of course, we deserved it. Second half was an open game with 25 minutes better [for] Tottenham. But they have the quality, so that's what you have to expect and accept as well.

"I have to say, I thought the crowd was unbelievable, really unbelievable. They were not nervous, that's good.

"Nobody was really nervous - they knew it could happen, 'Come on, let's try'. They were really behind us and I love that."

With no more interruptions between now and the end of the campaign, Liverpool can collectively sharpen their focus on the remaining six league matches at Melwood.

"We need time together, we need time to train, prepare and all that stuff - and we have that now," Klopp continued.

"We don't need a lot of time, but we need it together. We have that now and now let's go again, recover and then fly probably to Southampton.

"It's another team in a really good moment. We will fight again. That's all that I can promise."