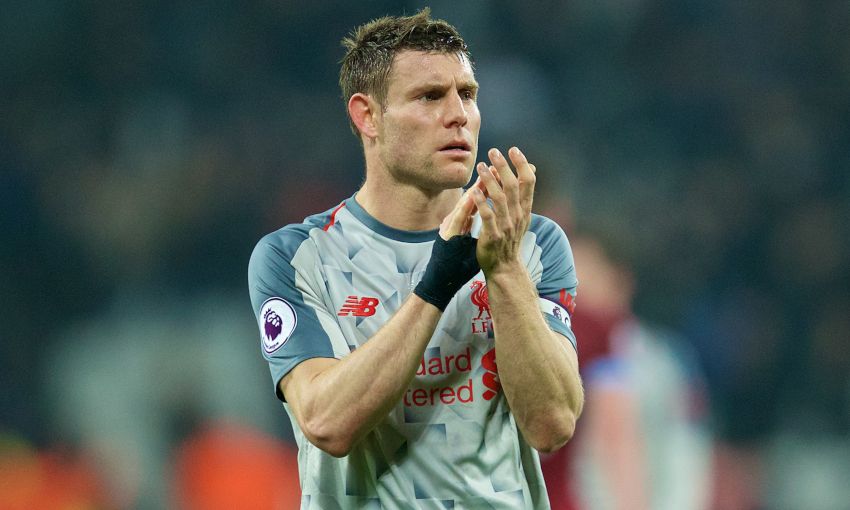 James Milner called on Liverpool to 'embrace' the nature of the Premier League title race after Monday's 1-1 draw with West Ham United.

The leaders were denied victory for a second successive game as Sadio Mane’s opening goal at the London Stadium was levelled by Michail Antonio.

As against Leicester City in their previous outing, Jürgen Klopp’s side were unable to produce a winner and their advantage at the summit now stands at three points.

Milner took a positive view of the current situation, though, and urged the team and fans alike to relish the demands of battling for English football’s top prize.

“It is about not getting too down and there is such a long way to go, it wouldn’t surprise me if the lead changes hands all the way to the end, but we have to be confident we can get the job done. It is in our hands and there is a long, long way to go.

“I think we should enjoy being in this position, these are the positions you want to play in. It is a lot worse at the bottom end of the league when you are fighting against relegation or playing for nothing in mid-table, so let’s enjoy it and push forward together – ourselves, the fans and the whole club – and embrace it.”

Watch: The best of the 1-1 draw with West Ham

Klopp felt a point was a deserved outcome for Liverpool from a game in which West Ham repeatedly threatened from set-pieces and the visitors’ goal was created from an offside position.

“I don’t think we played as well as we could, it’s a disappointing goal to give away. But I think you could look at that as a good point at the end of the season,” Milner, who teed up Mane, continued.

“It is not an easy place to come, they’ve got a pretty good record against the top teams, so hopefully we can look back on it at the end of the season as a good point.

“It was never going to be easy, we knew that. We have been a bit unfortunate in the last few games, with preparations and little injuries, so that is not ideal, but that is what you get during a season and it is how you deal with it.

“If it is a bit of a blip for us in the season, we’re not losing games, we’re picking up points, which is the positive side. But there are plenty of things we can work on, which is good.

“We know we can improve on that, and we’ve got a game in a few days where hopefully we can bounce back and get three points.”

The draws with Leicester and West Ham followed a similar narrative – in both games the Reds got in front, were pegged back before half-time and subsequently found it difficult to break through a second time.

Milner accepted elements of Liverpool’s performances have to be improved, though also cited the difficulties presented by injuries and illnesses as contributing factors to overcome.

“I think we can be better on the ball, a bit more positive, I think the counter-pressing can be better,” explained the vice-captain.

“Maybe we just lacked that energy for some reason. But, like I say, you go through these phases in the season and we’re not losing games, that is the important thing.

“Nothing has changed, we are still top, which is a nice place to be at this stage of the season. We’ve got a long, long way to go and lots can change, but let’s enjoy being in this position and let’s enjoy our football – and hopefully get a few players back, because we have had a bit of a bad run with injuries and a bit of bad luck.

“Everyone gets it at different times of the season; this is our time and it is how we deal with it. Going through this phase, teams changing and things like that, it is how you deal with it as a squad, and the squad has stuck together.

“You look at the bench, a very young bench, and it is good to give those guys experience. Adam [Lallana] has come in and done very well – I think that is important, more minutes for him.

“But it is how you deal with these periods of the season and hopefully we can keep picking up points and pushing on.”