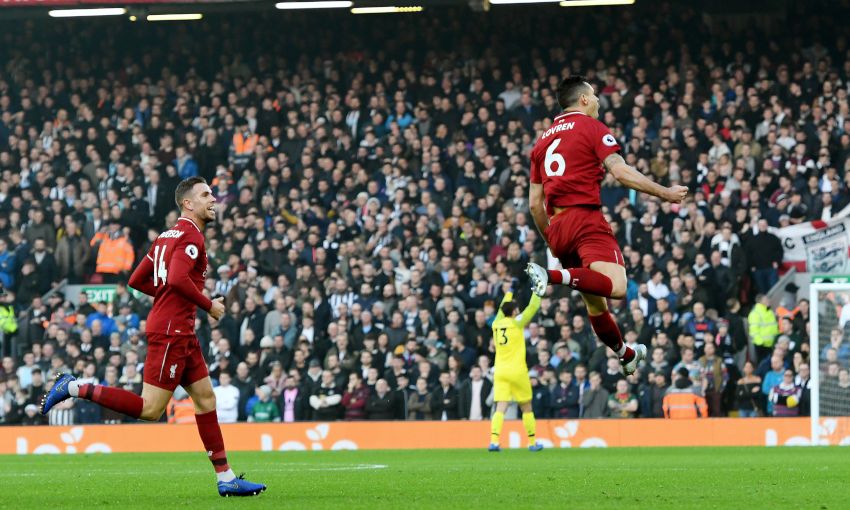 Dejan Lovren gave a self-deprecating assessment of his brilliant opening goal against Newcastle United, admitting: "Usually it's a ball to kick into the stand!"

The Liverpool defender thumped an unstoppable drive into the top left corner 11 minutes into the Premier League clash at Anfield, to set the home side on their way to a 4-0 win.

It was Lovren’s seventh goal for the club since joining four-and-a-half years ago and, in terms of quality, perhaps his best – and the No.6 was a delighted, and humble, scorer.

Watch: The best of the win at Anfield

“It was quite difficult to catch the ball, to be honest. Usually it’s a ball to kick into the stand, like defending a set-piece for me,” he told Liverpoolfc.com.

“But luckily enough, I did it, I scored. It’s always great to score for Liverpool and hopefully we can do it again in the next couple of games because we need everyone now.

“There are tough two games now: Arsenal and Man City. We need to keep this momentum.”

Newcastle, led by former Reds boss Rafael Benitez, made the opening 45 minutes a tough experience for Liverpool as they sought to consolidate their grip on top spot.

But Mohamed Salah won and converted a penalty two minutes into the second half to give Jürgen Klopp’s side a cushion, before late additions to the scoresheet by Xherdan Shaqiri and Fabinho.

And Lovren felt the hosts’ improved performance after the break was pivotal to the result.

“It wasn’t the first half we wanted; we had good chances but didn’t score – other than my shot – and it wasn’t easy,” said the centre-back.

“But we did brilliantly in the second half, we kept our style of football and it was rewarded. It’s not easy to win 4-0 against a tough opponent who play five at the back.

“We created so many chances, it’s good for us. I heard the other results [in the Premier League] but it doesn’t matter – we are focused on ourselves.”

Liverpool’s victory, coupled with those results elsewhere in the division, increased the gap at the top of the league to six points at its halfway stage.

Lovren provided his view on the attributes that have allowed Klopp’s men to become the pace-setters and clock up 19 games without defeat this term.

“We play every game like a final,” he said. “It’s what we learned in previous seasons: it doesn’t mean anything if you win and then the next game you don’t do well.

“So, we’ll forget this game and next concentrate on Arsenal. That’s what keeps us going. We have big character in the squad. If you want to be at the top, you need to have the winning mentality and the calmness.”