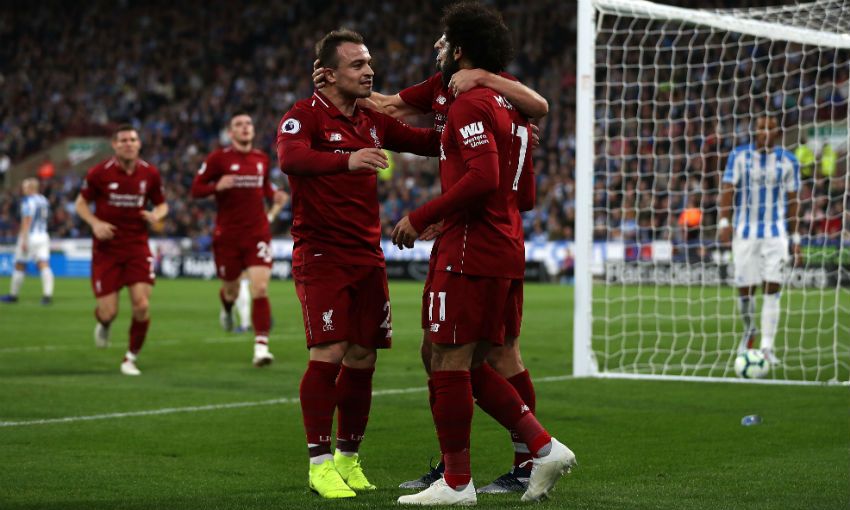 A pre-match instruction from Jürgen Klopp enabled Xherdan Shaqiri to be the architect of Liverpool’s win over Huddersfield Town.

Shaqiri provided a perfectly-weighted throughball that Mohamed Salah would poke into the bottom corner midway through the first half at the John Smith’s Stadium.

That goal proved decisive, too, as the Reds successfully navigated their way through a testing Saturday evening to claim a victory that puts them level with Manchester City at the top of the Premier League.

Switzerland international Shaqiri started the game as part of Liverpool’s midfield and, speaking post-match, the No.23 explained that his manager had asked him to be a creative force from a deeper role than he is accustomed to.

“I started off in a midfield three and it was also something new because normally I’m more offensive, but I think I can play this position,” Shaqiri told Liverpoolfc.com.

On his assist for Salah’s match-winning goal, the 27-year-old continued: “My teammates know that I’m a player who can play that last pass.

“It was a good pass from Joe [Gomez], I got the ball between the lines, I turned and it’s difficult sometimes to defend when I turn and am in front of defenders. Mo made a good run and I gave him a perfect pass so it was a good goal.”

The Reds were far from their free-flowing best against David Wagner’s side, but Shaqiri asserted that being able to pick up three points from below-par performances is a hallmark of a ‘top team’.

“It was difficult, we saw it in the game. Sometimes we made some simple mistakes which we normally don’t do so we gave them more little chances to go forward, but in the end these tough games you have to win and we did it,” he said.

“Of course it was not simple and a lot of players were coming back after the international break, some with small injuries and illness, but we won and that’s football and I’m really proud that we won.

“I have said before a top team has to win all of the ugly and tough games. Good teams and top teams win games like this.

“Of course it was not the best football that we have played the fans have ever seen from us but at the end we won the game. We just keep going, analyse this game - what was good and not good - and then we close this game and look forward to the next one.”

Van Dijk satisfied after Reds 'grind it out'>>