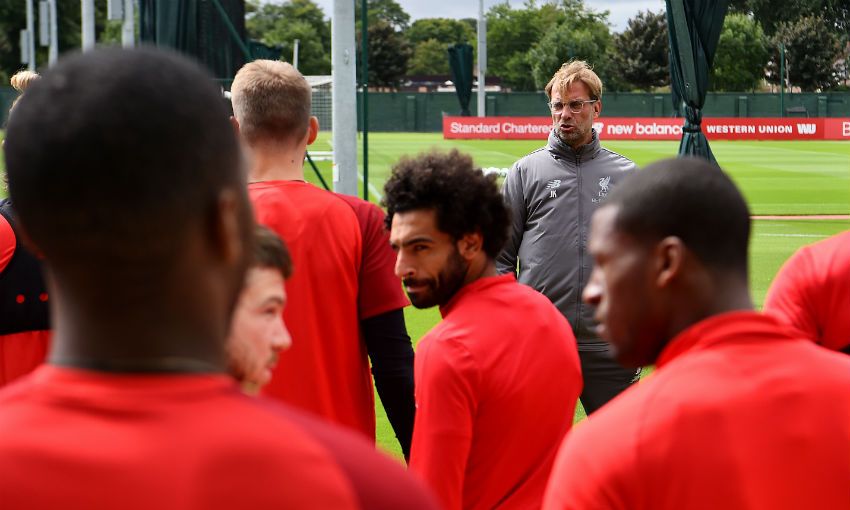 Jürgen Klopp often publicly implores his players to ‘stay angry’ in the aftermath of a win or build-up to a game.

And Georginio Wijnaldum has explained that the boss delivers the same message to Liverpool’s squad behind closed doors, too.

Back-to-back victories over West Ham United and Crystal Palace have got the Reds’ Premier League season up and running in promising style ahead of Saturday’s meeting with Brighton and Hove Albion at Anfield.

Klopp’s team scored six goals and conceded none while beating the Hammers and Palace, but Wijnaldum insists there is no sense of over-confidence or complacency around Melwood.

“To be fair, the manager makes sure that we do that!” was the Dutchman’s reply to Liverpoolfc.com, after being asked how the players go about subscribing to Klopp’s ‘angry’ mantra.

“Of course I think he’s happy when we play good, play well and win games, but he is always also busy with ‘be aware that things can change if you don’t give 100 per cent, if you are not concentrated, if you are not playing angry’, because every game, in the Premier League especially, is a fight.

“Every team wants to win a game, every team is trying to score and make it as difficult as possible for you to score a goal and to play your game. So if you’re not concentrated, if you’re not hungry or maybe don’t give 100 per cent, everything that you work with in the first two games can be away.

“So he makes sure that we are staying with both feet on the ground, work hard and tries to make us realise that we have to do a lot to play a good game.”

Monday’s 2-0 victory at Selhurst Park was built predominantly on defensive solidity and resilience, whereas the 4-0 success over West Ham on the opening weekend of 2018-19 featured more attacking verve and fluency.

That, Wijnaldum feels, is proof that Liverpool possess the ability to win in different ways - an important characteristic for sides with designs on silverware.

“I think the first game we won good, we played a good game, attacked good and scored good goals. We created a lot of chances,” the midfielder said.

“We stayed compact, tried to stop crosses because they are really dangerous with crosses, we defended set-pieces good. We didn’t create that many chances, but in the first half we had a few but didn’t score, and we scored the penalty.

“Sometimes you create chances but you don’t score them all, and then you have to make sure that you don’t concede because if you have a day where you’re not good with finishing, when you’re not scoring the goal, if you concede a goal it’s easier to lose a game.

“Sometimes you have those kind of games that you only win 1-0 - what City had last season and the season before I think Chelsea had a lot of those games - and that can help you at the end of the season. I think it’s always good if you don’t concede goals and defend well.”

Brighton come to Anfield having recorded an impressive win over Manchester United last time out - a result Wijnaldum cites as evidence of the need for Liverpool to be focused this weekend.

“I think that shows how the Premier League is,” the No.5 said of the Seagulls’ victory against United.

“Everyone can win from everyone and that’s why the manager wants to make sure that we are always angry, always give 100 per cent and be concentrated because otherwise you can also lose because every team has their quality to win games against the top teams.

“You have to be aware of that and I think if you do the things that you’re good at and you play with anger, if you’re concentrated, if you’re always on the front foot, that gives you a bigger chance to win those kind of games.”