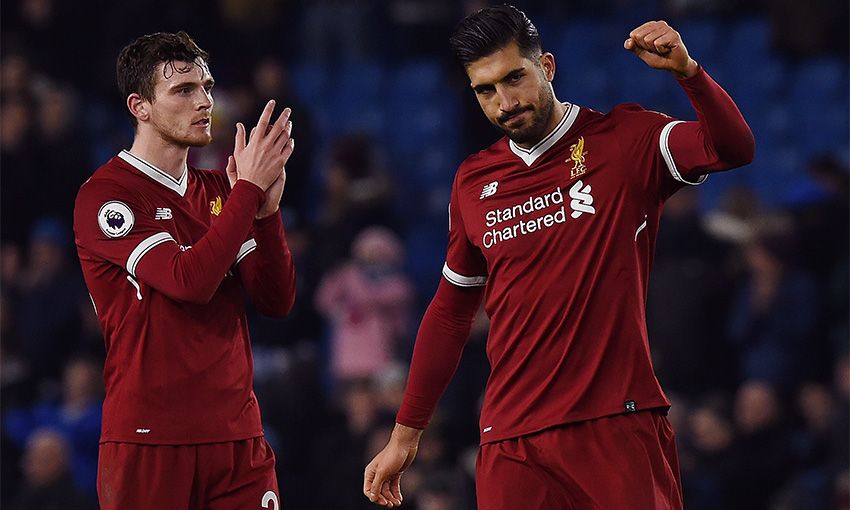 Emre Can is in line to make a milestone appearance for Liverpool in this evening's Premier League clash with West Bromwich Albion.

To find out what landmark the German international could reach, plus 11 other key pre-match facts from club statistician Ged Rea, read on...

Can could play his 150th game for Liverpool in all competitions if selected to face the Baggies. The 23-year-old joined the Reds from Bayer Leverkusen in 2014.

Netherlands midfielder Georginio Wijnaldum could play his 50th league game for the Reds.

Liverpool require two goals to record 200 in the league against West Brom.

There has been only one goalless draw between the teams at Anfield since 1953 – that came in October 1984.

Last season, the Reds recorded their 17th league double over West Brom and their fifth of the Premier League era - winning 2-1 at home and 1-0 away.

The Baggies have lost 18 of their last 23 visits to Anfield in the league.

Liverpool’s biggest ever league win over West Brom came in April 2003, when they won 6-0 at the Hawthorns.

Philippe Coutinho made his Liverpool debut in this fixture in February 2013 - Albion's last win over Liverpool. Since that match Liverpool are unbeaten in eight meetings, with four wins and four draws.

Just two Liverpool substitutes have scored against West Brom - Luis Garcia in the Midlands in December 2004 and Divock Origi at Anfield in 2015 - both in the month of December.

Mohamed Salah has scored 13 goals in the Premier League this season. His next will see him become the first player to score 14 times for the club in the top flight since Luis Suarez in 2013-14.

Should he score this evening, only two players in the club's history will have reached 20 goals in a season quicker, in terms of date. In 1986-87, Ian Rush netted his 20th goal on November 8, while Roger Hunt reached the milestone in 1961 on November 25.