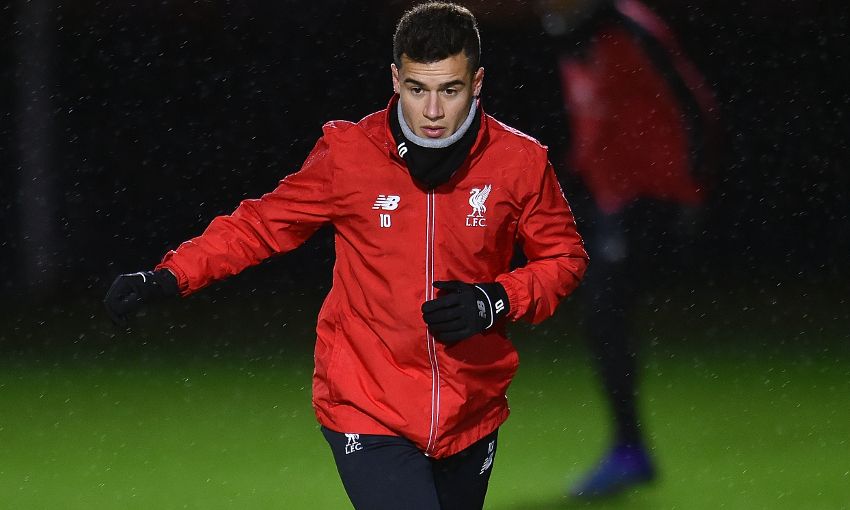 Jürgen Klopp has confirmed Philippe Coutinho, Divock Origi and Daniel Sturridge should feature at West Ham United – but a plan will have to be formulated for the amount of time they each play.

The attacking trio made a welcome return to training at Melwood last week with a view to being involved in the FA Cup fourth-round replay on Tuesday evening.

Sturridge was in fact named among the substitutes for the Barclays Premier League draw with Sunderland at the weekend, though two first-half injuries meant the No.15 was not brought on later in the game.

Their preparations remain on course for the meeting with the Hammers, the manager explained at his pre-match press conference, though a decision must be made on which of the three – if any – play from the start.

Klopp said: “We haven’t decided about the starting line-up. We now have a very important session.

“[Sturridge] was fit enough to be on the bench. He was impressive in the last session on Friday night, so we thought ‘come on, if there’s a chance for 10 or 15 minutes, we should try it’.

“We spoke to him and he said he would like to. But then the game had a different story and there was no possibility with the two early changes.

“Divock and Phil will be in training today too and are in the squad, hopefully, for tomorrow.

“It’s a little bit complicated because extra-time is possible. We have to look at who will start – they can’t all start together, that’s not possible because we know we would have to change three times because the whole game would be too much in this moment.

“So we have to figure out how we do it best but we will find a solution, for sure.”

In the initial clash with West Ham at Anfield, Klopp opted for a blend of youth and experience and was rewarded with a performance that many felt deserved more than a goalless draw.

A similar side is likely to be selected to face Slaven Bilic’s team in the replay, though the boss has more options to choose from this time and reiterated his commitment to progressing in the competition.

He said: “It is always about who is available. A lot of players are off today but we will have 20 players in training.

“In this moment we have 38 players in our squad, with all the young lads involved and we always train with them and the rest can rest. That’s what we are always doing.

“Today a few players are off and tomorrow we will make a squad for the game. But it’s not like Exeter because a lot of players are now available and it’s good for them to play. So I think we will have a different line-up.”

Klopp added: “We will make decisions for this situation. A few of the young players are not available.

“I’m sorry for Cameron Brannagan, he is ill. That’s a shame for him because he played really well [in the first match against West Ham]. The other players did a really good job.

“We try to find the best solution for our situation; we don’t think too much about the competitions because it doesn’t make a difference.

“We can’t say ‘this game is not too important’ – each game is very important for us. We will try to find a line-up to beat West Ham at West Ham, and that’s not too easy.

“But the last game against West Ham was a good game for us and we saw what we are able to do. We should do it again or better and then we have a chance.”