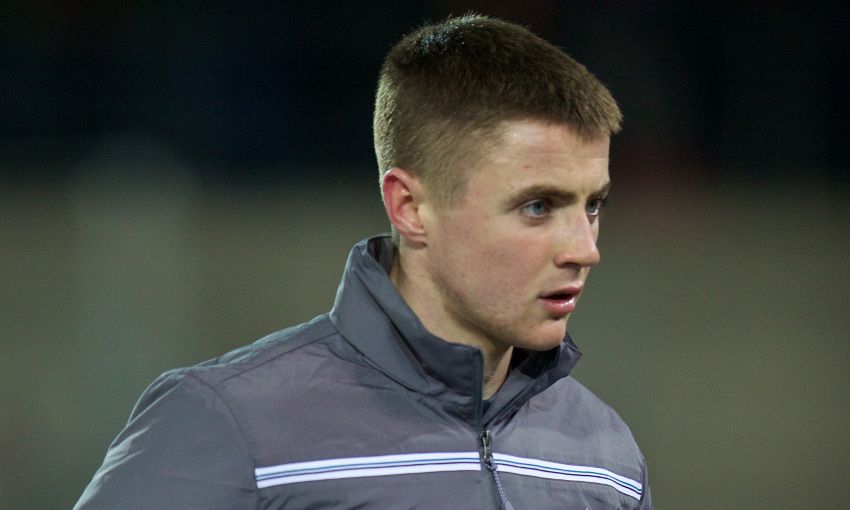 Jordan Rossiter has revealed that his recovery from a hamstring problem is 'progressing well' and the Liverpool midfielder is hopeful he can begin running at Melwood again in the next two weeks.

The Scouser has been sidelined since sustaining the injury during an appearance from the bench in the Reds' 0-0 draw at FC Sion back in December.

That outing was in fact the No.46's first since October, when he picked up a hamstring issue while helping England U19s' bid for European Championship qualification.

Now, after a lengthy period of rehabilitation, Rossiter is closing in on a return to the training pitches, and he is eyeing up a more sustained comeback this time around.

"I'm doing quite well, it's progressing well at the moment," he told Liverpoolfc.com.

"I think I've been out around eight weeks now, but I'm hopefully looking to be running around the next two weeks. It's been frustrating but hopefully there are better things to come soon.

"I picked up a hamstring injury in October which kept me out and I was back fit for two weeks, but to pick up another injury has been frustrating.

"Hopefully it all turns around soon and I get a bit of luck."

Rossiter's injuries mean he has appeared just once under Jürgen Klopp since the German was appointed Reds boss in October, and has had little time to impress at Melwood.

As a result, the 18-year-old is keen to make up for lost time when he eventually resumes full training, and is taking inspiration from teammate Jon Flanagan's recent resurgence after injury.

"Every day I'm here working hard in the gym and I look outside and see everybody training," he added.

"It's a bit frustrating but I know I'll hopefully get my chance in [matches] and in training.

"I think that's always the case, you've always got to work hard.

"Jon Flanagan was out for around 18 to 20 months and I look at him, he's come back in and done brilliantly in the Stoke game and Exeter game.

Rossiter also takes great heart from the opportunities handed to his fellow Academy graduates in the FA Cup by Klopp this season.

The England U19 international is pleased to see many of his teammates from the club's youth set-up get their chance, and will be ready to capitalise if he also gets the nod in future.

"It's great to see and everybody's playing well when they've had the chance," he enthused.

"So I know my chance is there when I do get back and I'm made up for the lads, they've done brilliantly when they've played. I couldn't be happier for them."

Rossiter on his journey from Academy to first team

Skrtel and Milner to miss Leicester, but Lovren and Mignolet to return