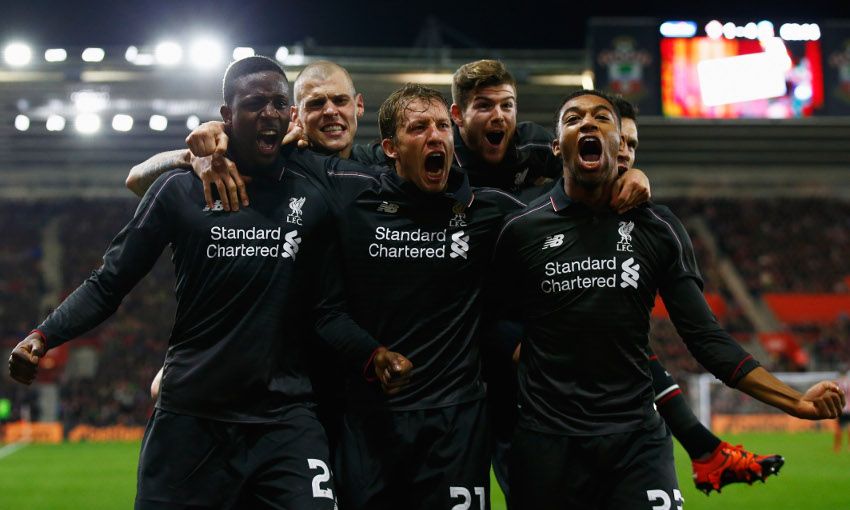 Divock Origi fired a hat-trick as Liverpool came from behind to book their place in the semi-finals of the Capital One Cup with a resounding 6-1 victory over Southampton at St Mary’s on Wednesday night.

A minute hadn’t even elapsed when Sadio Mane headed the hosts into the lead, converting Ryan Bertrand’s centre from close range unmarked.

But from there on in, it was all about the Reds, initially drawing level midway through the half with a touch of brilliance from Daniel Sturridge, who collected Joe Allen’s pass, danced around Steven Caulker and drilled into the bottom corner.

Three minutes later, the striker – making his first start since October – had his second when he turned home Emre Can’s sumptuous over-the-top pass with a first-time finish to spin the game on its head.

Liverpool added a third just before half-time when Alberto Moreno arrowed a low half-volley from the corner of the box towards goal which was nudged in by Origi after the hosts had only half-cleared a corner.

Origi netted with a more emphatic finish on 68 minutes, crashing a shot into the roof of the net from substitute Jordon Ibe’s pass to grab the Reds’ fourth of the night.

Ibe then helped himself to a goal when he chested down Moreno’s cross and whacked a low volley into the bottom corner before Origi completed his hat-trick with a header to cap off a stunning night’s work from the visitors, who kept dreams of silverware firmly intact.

Jürgen Klopp elected to make six changes to his starting line-up for the trip to the south coast, most notably with Sturridge beginning his first game in two months in attack.

Elsewhere, there were also berths for Adam Bogdan, Connor Randall, Lucas Leiva, Origi and Allen, while Jordan Henderson was named on the bench.

Going into the game, Liverpool had won each of their last three outings and, indeed, could boast a record of just one defeat in 10 under Klopp.

However, they found themselves trailing with just 39 seconds played at St Mary’s when slack defending allowed Mane to bullet in a header from yards out after meeting Bertrand’s cross.

The Senegal forward had rescued a point for Southampton with his head during a 1-1 draw at Anfield in October, and he went close again moments later when he nodded powerfully straight at Bogdan from Victor Wanyama's delivery.

There was no doubting Ronald Koeman’s side had started in the ascendancy, but on 25 minutes when they were undone by a piece of brilliance from Sturridge.

Collecting Allen’s arching through ball from the right, the striker shimmied one way and then another to evade Caulker before smashing across goal and into the far corner.

Three minutes later and he was celebrating once again. This time, Can played a magnificent outside-of-the-foot pass over the Southampton defence and into the path of Sturridge’s run, who swept home with a first-time effort.

And with that quick-fire double, Liverpool had assumed control, with the Saints’ early impetus blown away.

There was still time for a third before the break. Adam Lallana’s corner from the right was headed away, but only as far as Moreno lurking just outside the left corner of the area. The Spaniard returned the ball with interest, smacking a half-volley towards the bottom corner and Origi successfully diverting it over the line.

Southampton set about trying to salvage something from the tie in the opening stages of the second period, although it was Lallana who went closest to adding to the goal tally when he flashed a 25-yard drive just wide.

At the other end, Mane thought he’d found himself with a clear run and shot at Bogdan’s goal, but some fine cover work from Randall thwarted the Saints’ No.10.

On the hour, Klopp elected to withdraw Sturridge from the action with Ibe taking the place of the striker as he works his way back to full fitness.

And the young winger had made a telling contribution within a matter of moments, supplying the through pass for Origi to latch onto and a crack an unstoppable shot beyond Maarten Stekelenburg from just inside the area.

Ibe then added his name to the list of goalscorers shortly after, thumping home a volley from 12 yards after using his chest to push Moreno’s cross beyond Virgil van Dijk.

And Origi had the final say, duly completing his hat-trick with a close-range header from substitute Brad Smith’s cross to send Liverpool into the last four in emphatic fashion on a night that will live long in the memory.