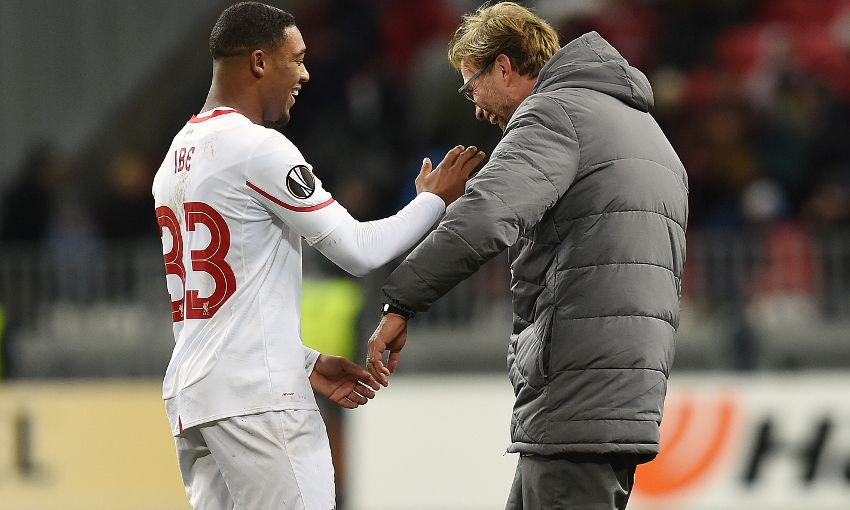 Jürgen Klopp saw another step forward from Liverpool after his team boosted their chances of Europa League progress with a deserved 1-0 victory over Rubin Kazan on Thursday night.

The Reds ended a run of three successive draws in Group B by defeating the Russian side through Jordon Ibe’s calm finish off the post seven minutes into the second half – his first competitive goal for the club.

James Milner had previously clipped an effort against the crossbar as Klopp’s charges dominated for long periods at the Kazan Arena, racking up 23 shots on the Rubin goal and enjoying almost 70 per cent possession.

Ibe’s strike consolidated second place in the group and means Liverpool can secure their spot in the competition’s knockout stages if they beat Bordeaux at Anfield later this month.

“The result and the first 80 minutes were really good,” the manager reflected at his post-match press conference.

“It was not easy to play today because there was a fantastic atmosphere in the stadium. It’s a really good place to play football but the pitch is not in the same shape as the rest [of the stadium].

“It was not easy for the team and it was more about possession. We did really well, we had our chances and could have had more [goals]. We deserved our goal and then, as it is in life, we have to learn everything – and we have to learn to win.

“We made it 1-0 but then lost a little bit of rhythm and opened the door a little bit for Rubin Kazan. The lads fought for their lives and it was really great to see how much they wanted to win.

“We analysed the first game but it is not the biggest surprise Rubin Kazan were very well organised. We had our chances in Liverpool, but not the big ones we had tonight.

“I think we played much better tonight and that’s normal because we’ve had four weeks together – we have more experience together.

“It would have been great if I could have brought Phil Coutinho on, but I didn’t want to risk him because he had a little hamstring issue – only a little one and everyone told me he is fit. But I am not a believer in things like this and it was a heavy pitch to play on, very intensive, so I didn’t want to take this risk.

“If we could have brought him on with Adam Lallana, it would have been better for our game because it was very intensive for my side. In the end, we changed some things in the game to create more chances and I am really satisfied with how we did.”

Ibe’s recent endeavours bore fruit in Kazan when the 19-year-old took full advantage of central space, surged through the middle and found the target via the woodwork with a precise hit.

Footage from Melwood last week had shown the player and manager sharing in a light-hearted moment, Klopp jokingly offering the No.33 his glasses as a pass went astray.

In assessing the wide-man’s contribution seriously, though, the boss noted the qualities that can be harnessed if coupled with continuous hard work.

Klopp said: “The situation was that Jordon played a bad pass and maybe it was because he needed glasses – that was my opinion and I don’t need them so often!

“But it for sure was not the reason for his performance today. He is a very good lad, a very skilled player and a really big talent – he is fast, strong, good at dribbling.

“He has a lot to learn, but has a really good base. He feels good at the moment and we could see it tonight. Like everyone, he has to work hard – he is very young and has a long way to go. He has to learn and if he is prepared to listen, everything will be good.”

A strong Liverpool squad travelled to Kazan and Klopp’s team selection followed suit, with Christian Benteke returning to the XI to lead the attack.

The manager explained: “I only build teams or make squads to win the next game, not to give someone a rest if he doesn’t need it. That’s what we did today.

“We had Adam Lallana and Phil Coutinho with some problems, not the biggest ones, and so they were on the bench. They could have played but we didn’t risk it in this case and tried to win without them. At this moment, the squad is big enough and strong enough.

“The same thing with Martin Skrtel – he played nearly all the game against Bournemouth after coming on for Kolo Toure. We gave him a rest today because Dejan Lovren is a strong player.

“It’s not because they’re rested, only because the other players are fresh and the possibility to win is big. That is why we came here – we didn’t fly five hours for a friendly!”