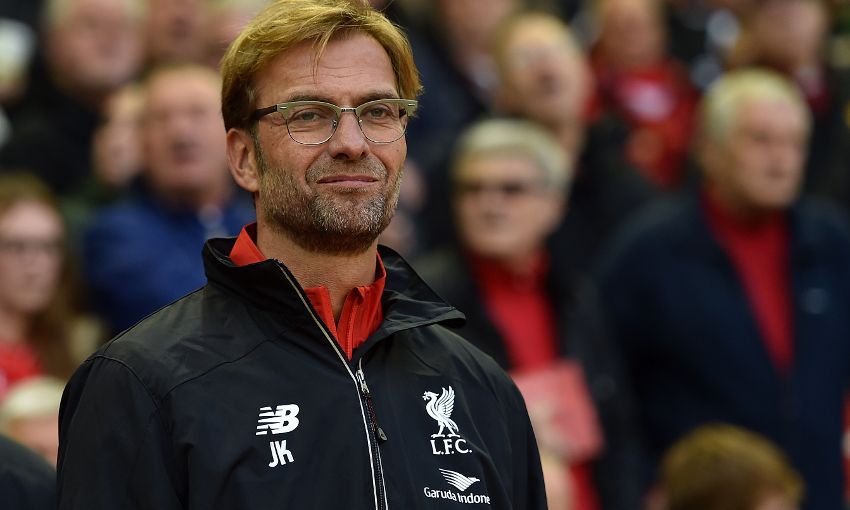 Jürgen Klopp explained why Liverpool need to maintain their belief when setbacks befall them after Southampton struck in the closing moments to deny the Reds in a 1-1 draw at Anfield.

Christian Benteke appeared to have secured all three points when he rose to meet a James Milner delivery with a thunderous header in front of the Kop with 13 minutes to go.

But when the Saints sent a free-kick into the area late on and it was nodded back across the box, Sadio Mane squeezed in a finish to frustrate the hosts and rob Klopp of a first win.

In assessing the game, though, the boss insisted he saw enough from his team to be encouraged and now the players themselves must have faith in recovering from such situations during a match.

“There were many things I saw tonight that were really fine,” said Klopp.

“I saw two teams fighting for a result, one team with more freshness because of one game less in the week. But we played football against them. They tried to press high, they stayed high in the space, and we were brave enough to play football.

“We had our moments and situations. We had everything you need in a close game to win. We made the goal and we wanted to win, of course.

“This free-kick – everybody knows you should avoid things like this against a team like Southampton with their spring in the air. We lost three one-on-ones in the air, bad luck, and it’s a draw.

“There was still 10 minutes to go. We didn’t give up physically, it’s not that we stopped our game physically, but we didn’t believe anymore that we could turn the game around. That’s a problem, that’s why we’re not calm enough in the moments when we have the chances, the last pass and so on.

“I don’t understand this pressure at the moment, but the guys feel it. You can see that. They work so hard, they are full of concentration, full of readiness, full of passion, everything is there.

He added: “Things like this happen. If you hope that nothing happens in the moment the ball goes in the air, I saw things like this not only with my team but with other teams – self-fulfilling prophecy, something like this?

“That’s what we have to do now and that’s what we are doing. I hope I’m not the only person in this stadium who thought it’s not the end of the world.

Benteke was introduced at the beginning of the second half and provided a focal point for Liverpool as they attacked the Kop in search of a breakthrough.

The Belgian was unstoppable when Milner swung in the cross that led to the goal, climbing highest and diverting the ball into the air and past the goalkeeper into the top corner.

“It was an absolutely fantastic goal,” said Klopp. “There were many good moments in the game.

“We can talk about why we didn’t make the next step, why we didn’t do this – but we all know it takes time. I see development, but the problem is the other teams don’t wait for us. They want to win and beat us.

“I don’t know what Ronald Koeman has said, but I am sure he didn’t think it was an easy game for them. They’ve played really well this season away from home, they’ve had good results and haven’t lost a game, so there was quality on the other side – and they didn’t play on Thursday.

“In my eyes, we were the better team and had more situations. I saw development, I saw the next step, I saw many things, but of course we are disappointed because of the result.”

Klopp was taking charge of the Reds at Anfield for only the second time since his appointment earlier this month.

And he dismissed a suggestion that tension existed within the ground, instead insisting that the elements are in place at the stadium to help the club achieve the success it craves.

He said: “For me, it’s cool. For me, everything is fine. I’ve been here two or three weeks and that’s the perfect football atmosphere.

“I don’t know what it was before but when I came here and everybody told me ‘OK, now we can win the league’ or something like this, that’s what I said, ‘the other teams won’t wait for us’.

“When was the last [league win]? 1990? The last league title was 1990 so maybe there are some people who think it’s time! But it’s not because of the atmosphere – everything is here that you need for more success in this moment.

“We have to be patient for this. I’m sorry for this but I am not the first person who says this. Now we have to work.

“I can enjoy these games – I love to work in this atmosphere. If nobody wants to be successful I wouldn’t be here. That’s absolutely OK, but we have to work hard.”