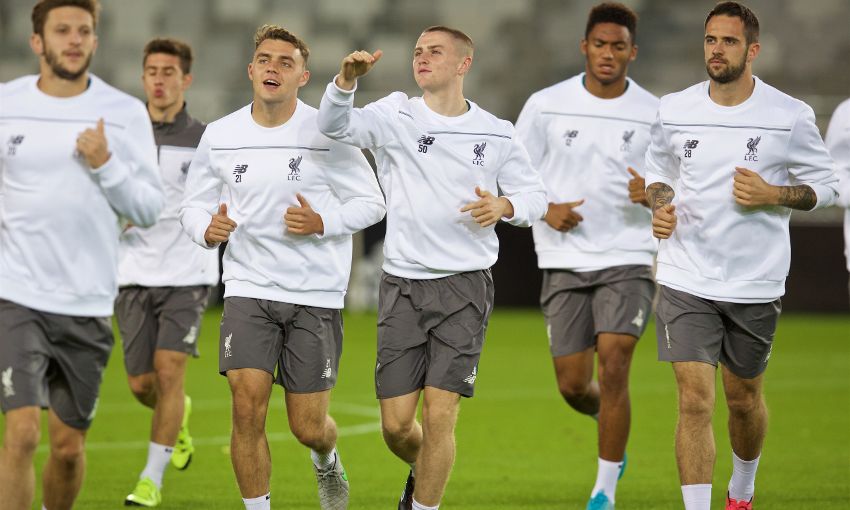 A journey that started when Jordan Rossiter was six years of age could reach another milestone if the Liverpool midfielder makes a maiden appearance on the European stage tonight.

The popular 18-year-old is part of the Reds squad currently in Bordeaux, France for their Europa League Group B opener against the Ligue 1 outfit.

It’s almost a year to the day that Rossiter was handed a senior debut by Brendan Rodgers, which he marked by scoring past Middlesbrough at Anfield in the League Cup.

A Barclays Premier League bow then arrived last month as the manager introduced the Scouser late on away from home to help preserve a goalless draw with Arsenal.

Next could be his first experience of continental football, though the mature young man is approaching the potential landmark with typical poise.

He told Liverpoolfc.com: “If my time comes, I want to show what I can do and hopefully repay the faith the manager showed in me in the Premier League a few weeks ago.

“It’s a dream come true. I have been working since the age of six to be up at Melwood training. But I just know I’ve got to keep my feet on the ground.

“I’ve still got a long way to go and I need to keep improving every day and hope for the best for the future.”

The trip to Bordeaux is the first fixture for the Reds in the group, which also includes the Russian side Rubin Kazan and FC Sion of Switzerland.

The message from Melwood this week has been that it’s a competition they are determined to thrive in – and Rossiter reiterated that standpoint.

“It was always going to be an important game, the first game in the Europa League,” the England youth international continued.

“A club like Liverpool should be in Europe and we are, so we’re going to have a good go at it this year. It’s going to be a tough test on Thursday but I’m sure we’ll do well.

“The gaffer has run through bits with us on the training field – how they play, how they set up and how we’re going to set up.

“I think it’s more about how we’re going to go over there and play our football – exciting football – and we all can’t wait.

“Liverpool have always had a massive influence on the Champions League and Europa League.

“This year it’s another chance to get into the Champions League, and that’s our aim this season, so any way we can get into it I’m sure we’re going to try because that’s where we want to be next year.”