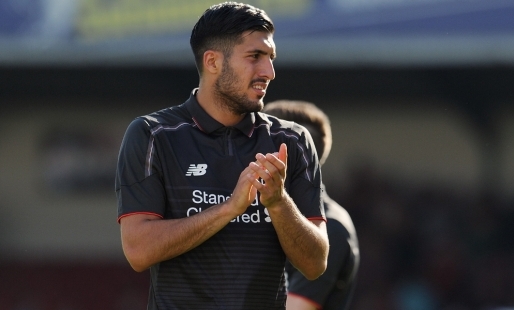 Emre Can believes he and his Liverpool teammates 'owe it to the fans' to atone for last season's slow start by getting off to a flyer this time around - starting at Stoke City on Sunday.

The Reds picked up just seven points from their first six games in the Barclays Premier League last term, a haul that undermined their push for a top-four finish later into the campaign.

By the time Brendan Rodgers took his team to the Britannia Stadium on the final day, hopes of a return to the Champions League were already extinguished.

But that did not make the 6-1 defeat that followed less painful, and Can wants to put that result immediately right this weekend.

"I'm always fully-motivated for every game, and the start of the season especially so," he told Liverpoolfc.com.

"I hope I can get the goal tally started quickly. We didn't end the last season particularly well, and I think we owe it to the fans to make amends.

"This is why the first few matches are especially important. I think we can start to put [the Stoke result] right with a few good results."

Can enjoyed a successful introduction to English football following his move from Bayer Leverkusen last summer, making 27 league appearances in total in his debut season.

The German wants to follow that up by continuing to feature regularly in 2015-16, and adding to his personal goal haul.

"I want to stay fit healthy and in form - that's always the most important goal to set oneself," he continued.

"I want to play as often as possible, and to have a good consistent season-long run of games.

The 21-year-old, who helped his country to the semi-finals of the European U21 Championship this summer, also backed the Reds to mount a challenge at the top end of the table this season.

"We have a very, very strong team, with a lot of good-quality players, who work together well as a team," he said.

"I think if we can start well and get a few good results under our belt, we can then keep our focus on each match as it comes, and hopefully compete for the title.

"We'll wait and see just how far we can get in terms of a title race."

Robertson and Can to join teammates in training today