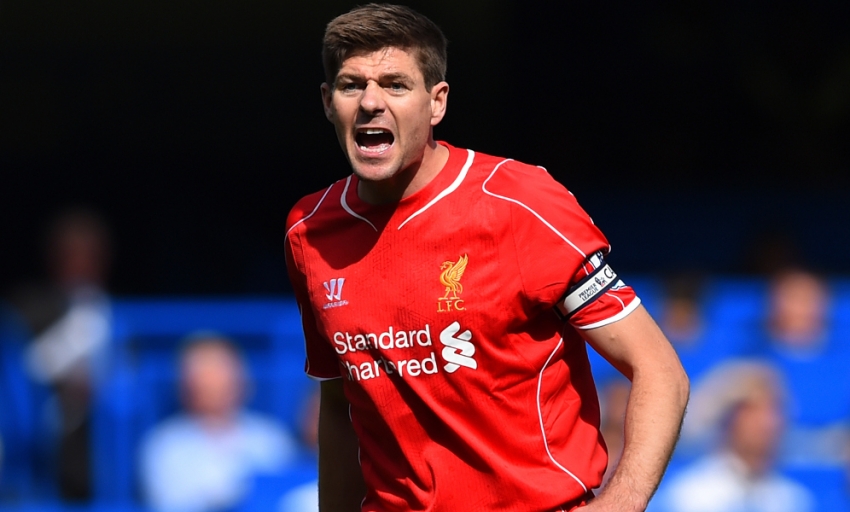 Gallery: All square at Stamford Bridge

Steven Gerrard marked his final appearance at Stamford Bridge with a goal as Liverpool earned a deserved 1-1 draw at Chelsea.

The captain cancelled out his opposite number John Terry's early header, nodding in moments before half-time, and Brendan Rodgers' men were unlucky not to earn all three points from a performance full of endeavour.

But, as it stands, the Reds' hopes of Champions League qualification have been hit by a stalemate, with a large swing in goal difference now required for a top-four finish.

Rodgers named an unchanged side from the one that defeated Queens Park Rangers last weekend, but did spring a surprise among his substitutes.

Academy starlet Jerome Sinclair was rewarded for his fine form at youth level this season with a place on the bench.

Liverpool congratulated the newly crowned champions by welcoming them onto the pitch with a guard of honour, but the competitive nature of the fixture was underlined within a minute of kick-off.

Cesc Fabregas saw the game's first yellow card for a hefty challenge on Raheem Sterling, as the end to the pleasantries was marked.

And, in the aftermath of striking the first physical blow, the hosts were soon ahead.

Willian's dangerous cross from the right on the break forced Martin Skrtel to head over his own bar and, from the subsequent corner, an unmarked Terry nodded home to put Chelsea in front.

Liverpool almost produced an immediate reply when Skrtel looked certain to connect with a corner kick at the other end, but the Slovakian narrowly failed to meet the ball with his head.

Philippe Coutinho went even closer in the 13th minute, as he side-stepped Kurt Zouma inside the box before firing a low shot at goal. Unfortunately for the visitors' No.10, Thibaut Courtois in the Chelsea goal was equal to it.

Skrtel followed Fabregas into the book for dragging down Willian just outside the box soon after, and the Reds needed an impressive punch from Simon Mignolet to get the free-kick away from danger.

The Belgian keeper was called upon again as Chelsea continued to ramp up the pressure, but did well to turn Fabregas' shot from a tight angle away just before the half-hour mark.

And that almost proved invaluable when Jordan Henderson looked to have played Rickie Lambert through on goal, only for the ball to run away from the Scouse forward.

Liverpool had the chance to end the half on a bright note when Lallana forced Ivanovic into bringing him down on the byline in the 43rd minute, a foul that brought the defender a deserved yellow.

The visitors made it pay, with Gerrard sneaking to the back post unmarked to nod Henderson's dinked delivery into the floor and beyond Courtois.

The skipper's strike ensured the Reds went in at the break level, and they could be pleased with their efforts during a hard-fought first period.

Lallana almost helped the visitors pick up where they left off at the start of the second half, but dragged his effort at the end of a fine passing move wide of the left-hand post.

Coutinho then went even closer, clipping a Sterling pull-back into the side-netting when he might have done better.

A period of Liverpool dominance followed but it was Chelsea who crafted the next good chance when Willian forced Mignolet into a smart low save with a shot on the break.

The Reds soon rallied, however, Lallana having an effort blocked and Skrtel driving over in quick succession.

The flow of the game did not discourage Rodgers from making a brave change, and he soon introduced the youngster Sinclair in place of Lambert.

Chelsea looked to push back after those changes were made with Fabregas forcing a save and a block, but Liverpool held firm.

And though the visitors picked things up again, chances were somewhat at a premium in the final 10 minutes, ensuring the game would end in a draw.