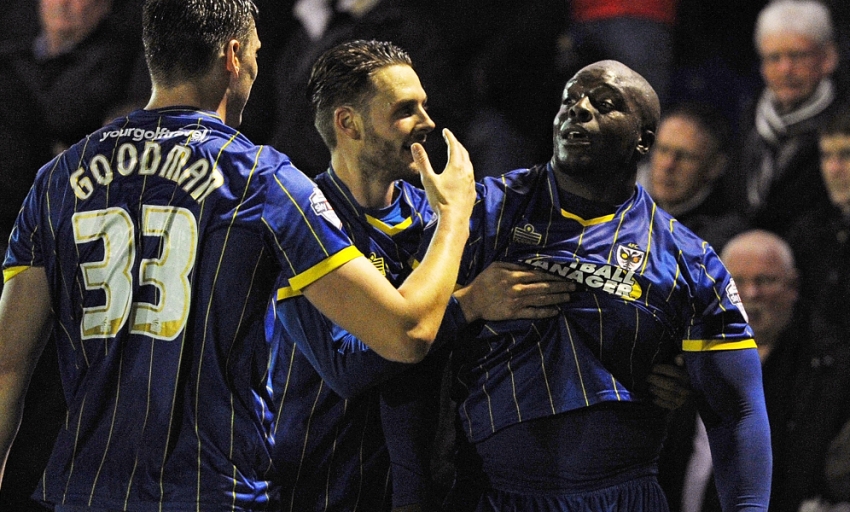 Lucas: My tribute said all about Stevie

Adebayo Akinfenwa insisted it was a dream come true to net against his beloved Liverpool as he made good on his pre-match promise to acquire a piece of Steven Gerrard memorabilia on Monday night.

The powerful centre-forward had warned his teammates prior to the FA Cup third round clash that they should steer clear of the Reds skipper at the final whistle, as Akinfenwa had his sights set firmly on swapping shirts with one of his heroes.

And while the match-worn jersey belonging to Gerrard was elsewhere when the pair met in the tunnel following the visitors' 2-1 victory, the captain came prepared as he provided the AFC Wimbledon man with a shirt for keeps.

The No.8 was the match-winner on the night with a swing of his imperious right boot, but before the 34-year-old notched a crucial second against the Dons, Akinfenwa had pounced to bring the home side level in the contest.

Speaking from the Kingsmeadow tunnel following the final whistle, the striker reflected on his effort against the Reds: "I can't put it into words - it's a dream. I've been a Liverpool supporter since I was five years old.

"To see the likes of Gerrard and [Martin] Skrtel and the whole of the Liverpool team and to score against them, it was written in the stars and I can't put it into words.

"We watch these players every Saturday. These are players we look up to and who we aspire to be. Every single one of us are waiting there to get our shirt signed by them.

"When the game was on, they were just players and we wanted to win the game. But after the game, reality kicks in and these are Premier League players. Throughout my career I've watched these players.

"So we've got the whole team out there - we're taking pictures and we're taking selfies. I'm not going to lie - it is what it is. It's a surreal feeling and something that doesn't come around much for us. We'll embrace it today and tomorrow it will be forgotten and we'll go back to normal life."

He added: "I got myself a selfie with Mario Balotelli and Brendan Rodgers. The big man, Steven Gerrard, hasn't come out yet, but if he tries to run, I might have to put him in a headlock so I can get a picture with him.

"Everybody knew. I put the word out - stay away from Stevie Gerrard's shirt, because it's mine. So hopefully he will sign it for me and it will be a good end to the day."

Gerrard wanted the ball more than anyone else in sight when he drove through the heart of the Dons' defence to connect with Javier Manquillo's cross and nod Liverpool's opening goal of the game on Monday.

The Reds looked in control and buoyed by their start; however, Neal Ardley's side were resurgent and they slowly turned the screw until a goalmouth scramble ensued and Akinfenwa saw his chance to prod home.

Wimbledon were perhaps even stronger in the second half, but Liverpool were more cohesive too and they found pockets of space for the likes of Philippe Coutinho to exploit on the counter-attack.

When Gerrard looped a free-kick into the net in the 62nd minute, the match was won, but even the Reds captain admitted afterwards that they had been tested to the limit on a tough night at Kingsmeadow.

"I felt that in the first 20 minutes we gave Liverpool a bit too much respect," reflected Akinfenwa. "They passed it around us and we let them play.

"But then we got into the game, got the equaliser and then I felt that we found our feet. But when you've got somebody like Steven Gerrard on the pitch, he was the difference. He was magical, scoring two goals.

"We're disappointed that we didn't see out a 1-1 draw. We'll look back on it with mixed emotions and concentrate on our league form.