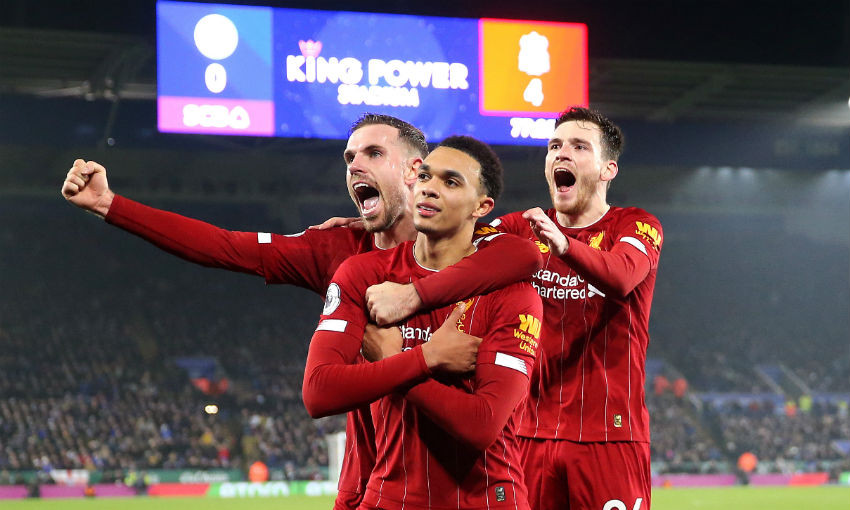 Here, we’ve picked out 10 of the defining moments from an unforgettable, record-breaking and historic Premier League season…

‘We will go again’

The resonance of Klopp’s vow - issued on Sunday May 12, 2019 - would grow exponentially as win after win was chalked up this term.

Ninety-seven points - accrued via 30 victories, seven draws and one defeat - hadn’t been enough to be crowned 2018-19 champions.

The relentless brilliance of both Liverpool and Manchester City created a title race for the ages; a duel Pep Guardiola’s team would edge by a solitary point on the final day of the season.

Having first offered his congratulations to Guardiola and City in the aftermath of his own side’s 2-0 victory over Wolverhampton Wanderers, Klopp pledged that the Reds would strive to ensure their unyielding challenge was no one-off.

To say they did just that would be a gross understatement.

Liverpool, it would turn out, were absolutely ready to make the next step. 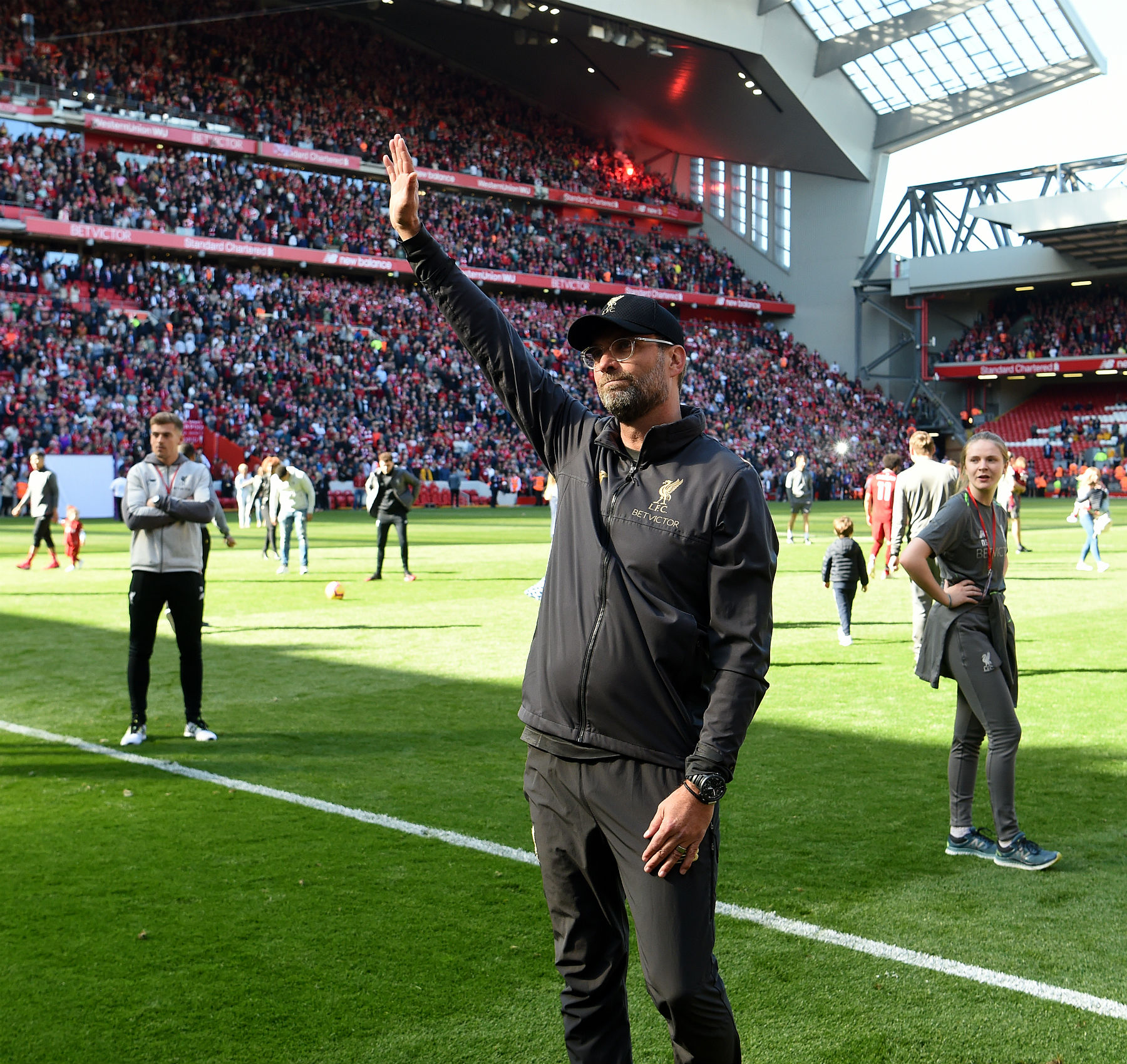 As John Fleck dipped inside Fabinho and onto his right foot, the outcome appeared inevitable.

The midfielder had a clear sight of Adrian’s goal from no more than 10 yards out.

Sheffield United would take the lead, and Liverpool’s 100 per cent winning start to the Premier League season would be placed in serious jeopardy.

Andy Robertson had other ideas, though.

The left-back hurled himself in the path of Fleck’s shot and, in doing so, kept the game scoreless.

That warm, late-September afternoon at Bramall Lane must surely go down as one of the sternest examinations of the Reds’ title-winning credentials.

Chris Wilder’s team, roared on by a boisterous home crowd, took a no-backwards-steps approach to meeting the division’s pacesetters, who headed to Yorkshire having begun the campaign with six consecutive top-flight victories.

That Liverpool would - just about - pass that exacting test was in no small part down to Robertson’s crucial intervention, which came moments before Georginio Wijnaldum’s 70th-minute winner. 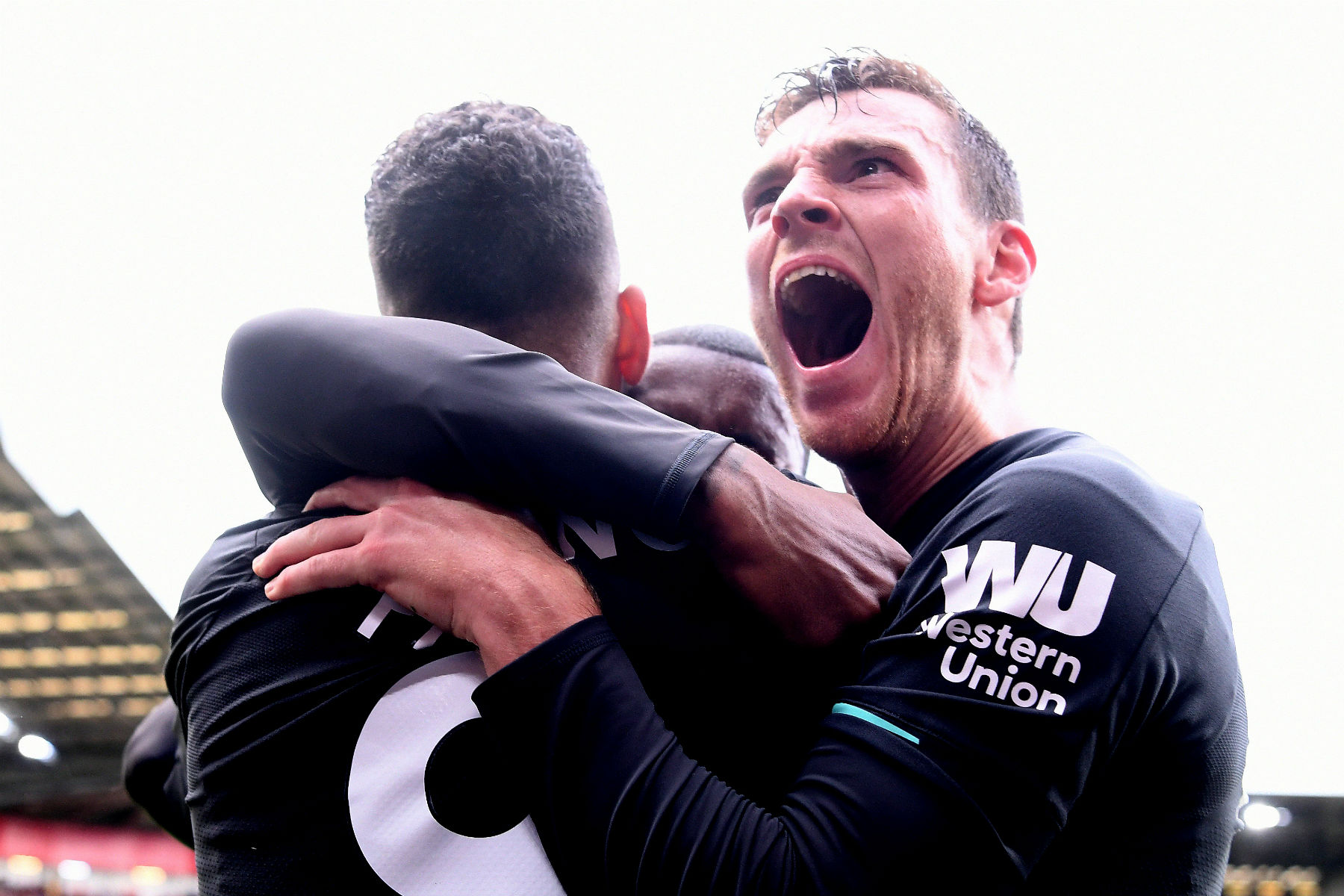 James Milner had plenty to ponder, and ample time in which to do so.

Referee Chris Kavanagh had pointed to the spot, but a VAR check was in progress.

Would the vice-captain have the opportunity to vanquish Leicester City?

Would he get the chance to secure a vital, and dramatic, 2-1 win in stoppage time?

And if so, would he convert to make it eight victories from eight Premier League games for Liverpool in 2019-20?

Ninety-three minutes of a hard-fought battle between the sides who started the day first and third in the table had elapsed when, with the score deadlocked at 1-1, Marc Albrighton fouled Sadio Mane in the area.

A couple of minutes later, Milner was finally permitted to face up to Kasper Schmeichel - and the No.7 duly rolled his penalty home with ice-cool aplomb.

“[It was] tough obviously, I was just trying to stay calm in that situation and concentrate on what I was going to do,” Milner said post-match.

“There was a bit of a wait. I was just trying to concentrate on what was going to happen.

“We’re just delighted to get the win; it was always going to be tough, they’re a good team. We looked pretty tired in the second half but we found a way to win again. It shows the character of the squad.”

Even devoid of all context, a late equaliser at Old Trafford is meaningful.

In and of itself, such a moment matters.

But when that goal extends an unbeaten start to a season and consolidates top spot in the Premier League?

Well, then it really matters.

Adam Lallana’s 85th-minute strike against Manchester United back in October earned a 1-1 draw and nudged the Reds six points clear of Manchester City.

The midfielder had been brought off the bench shortly before his vital intervention and spoke afterwards of the importance of squad depth to Liverpool’s objectives for 2019-20.

“I think it is a point gained, we weren’t at our best.”

Briefly, Liverpool’s destiny was taken out of their own hands.

Trailing 1-0 heading into the 87th minute at Villa Park, and with City having come from behind to lead late on against Southampton, the Reds’ advantage at the summit of the Premier League was set to be cut to three points.

Guardiola’s team would arrive at Anfield eight days later knowing that victory would take them top of the table ahead of the November international break thanks to their superior goal difference.

First, the latter clipped in an inviting cross that the former thumped home with his head at the back post.

Robertson’s reaction to his equaliser was informative: no celebration as such, just a sprint back to the halfway line and the imploration of his teammates to follow suit.

Through body language alone, the message was clear: ‘There’s still time for a winner.’

Villa can hold back the tide no more and Mane stoops to adroitly glance in Trent Alexander-Arnold’s corner with a header that is, in equal measure, both brilliant and brave.

Another late winner, another three points, another significant step towards the title.

“It’s what we do,” Virgil van Dijk neatly surmised as he made his way back to the dressing room.

As soon as the fixtures were released back in June 2019, eyes were drawn to the second weekend of November.

That was when last season’s top two would clash for the first time in 2019-20; when Liverpool would meet Manchester City again.

Anfield crackled with noise and anticipation on a cold winter’s Sunday afternoon.

Could the league-leading Reds open up a nine-point gap on second-placed City ahead of the final international break of 2019? Could City cut the deficit to three? Or would the sides play out a tight, tense stalemate as they did in the corresponding fixture a year earlier?

Thankfully, it was the former.

Within the opening six minutes, Fabinho launched a long-range missile into the corner of Ederson’s net to put the home team ahead.

And, seven minutes later, that lead was doubled in a manner that wowed Klopp.

“I don’t think I ever saw a goal like this. Probably not. A right full-back with a 60-yard pass to the left full-back; two more touches and a cross over 40 yards, 50, and a header. That’s pretty special,” the boss enthused.

It was a goal that perhaps typifies this 2019-20 Liverpool team; a microcosm of the champions’ attacking expertise.

There’s the switch of play from full-back to full-back with, on this occasion, Alexander-Arnold finding Robertson with a wondrous left-footed pass that unbalances City’s defensive shape.

There’s the arced cross from Robertson that begs to be headed in. And then there’s Mohamed Salah, doing just that.

It’s a moment of breath-taking ruthlessness; constructed and executed in the space of four touches of the ball.

Shortly after, City threatened to halve the deficit as Sergio Aguero weaved his way into space in the box and unleashed a fierce drive at goal.

As he always seems to be, though, Alisson Becker was there; Liverpool’s indomitable No.1 positioned perfectly to parry away.

The two-goal lead is preserved - and the gap at the top would indeed stretch to nine points, with Mane adding a third goal early in the second half prior to Bernardo Silva pulling one back for the visitors.

“Something to be proud of,” was Alexander-Arnold’s appraisal of a collective performance that, quite possibly, represents the high watermark of a quite phenomenal season.

It was second versus first: Leicester City v Liverpool, at the King Power Stadium, on Boxing Day.

Leicester went into the game having won seven and drawn two of their first nine home Premier League matches of the campaign, but that unbeaten record would be ended unceremoniously by the only team above them in the table. It finished 4-0 but, in truth, could have been more.

Liverpool’s display was emphatic, authoritative, irresistible. Ninety minutes of sustained superiority that extended their advantage at the top to 13 points but did something else, too: underlined the fact that they were now, indisputably, the best side in the country.

Of course, they were already officially the world’s finest - and that is what made this victory all the more impressive.

“Coming back from Doha, yes it was a long flight and we had two games including extra-time but we came back world champions - if that doesn’t give us a bit of confidence then I really don’t know what would, so we were never worried about that,” Robertson asserted post-match at the King Power.

“We knew our legs were ready, we’ve done everything right over the last couple of days and it was just about showing it because the excuses were there for people to jump on it, but these lads don’t give anyone any excuses.”

A feeling that had bubbled under the surface could be held back no longer.

Time to declare en masse what everyone, in reality, already knew: Liverpool would be champions.

Anfield reverberated and basked in the glory to come once the initial crescendo of an ecstatic celebration had subsided a little.

Salah had collected the quick-thinking Alisson’s pass, held off Daniel James and rolled a finish beyond David de Gea and into the Kop-end net.

It was mid-January and Anfield was calling it. It’s done, this title race.

“They can sing whatever they want - apart from my name before the game is finished!” Klopp smiled afterwards.

“I’m not here to dictate what they have to sing. If our fans would not be in a good mood now, that would be really strange.”

For the first time in what felt like an age, the spectre of defeat loomed.

Raul Jimenez had breached Liverpool’s hitherto impenetrable defence and Wolverhampton Wanderers were ascendant. Not quite dominant but certainly on top, fuelled by the adrenaline of an equaliser and the vociferous backing of their supporters.

All this had looked unlikely around an hour earlier.

Jordan Henderson had nodded in Alexander-Arnold’s corner and the Reds led at Molineux.

Klopp’s side were on course for a 22nd win of the Premier League season, in this their 23rd game, and a 16-point cushion at the top of the table was to be restored.

But Wolves fought and played their way back into the contest and were good value for the equaliser that arrived via Jimenez’s fine header.

Liverpool, however, stood firm; they resisted the subsequent wave of pressure and gradually wrested back the initiative.

They could, of course, have settled for a draw. In the grand scheme of things, a point would have been fine.

That, though, is not in this team’s nature.

“We had to dig deep, we had to fight - that's something we can do as well,” stated Van Dijk afterwards.

“Obviously we're not happy about the goal conceded but how we reacted on that is a good thing. We know we’re always going to have chances. Great three points.”

It was now a matter of when, not if.

“What I saw tonight, I wanted to have that before this part of the season and I said to the boys: ‘I want to see actually the best behind-closed-doors football ever.’”

The Reds’ first behind-closed-doors game at Anfield following the resumption of the season may go down as a textbook example of what teams should strive for when they are deprived of supporters to cajole, encourage and urge them on.

Crystal Palace were simply overpowered, overwhelmed, over-matched. The champions-elect put in a performance that bore all of their glorious hallmarks: skill, physicality and intensity, to name but a few.

Goals from Alexander-Arnold, Salah, Fabinho and Mane - each stunning in their own way - ensured the final scoreline read four goals to nil, but this was a 90-minute display of complete authority.

“I think we’ve sent a bit of a statement - the quality of the performance behind closed doors is probably one of the best that people have ever seen,” was Alexander-Arnold’s post-match summation.

What a season. What a team.