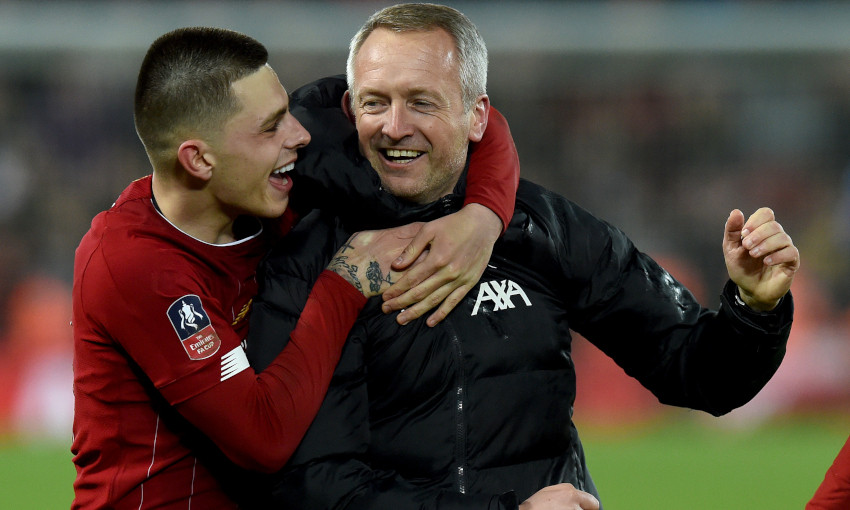 It was a night to remember in front of the Kop for Neil Critchley's Liverpool youngsters as the Reds progressed to the fifth round of the FA Cup after a 1-0 win over Shrewsbury Town.

A through ball from Neco Williams was headed into his own net by defender Ro-Shaun Williams for the only goal of the contest.

Liverpool now face a trip to Chelsea in the fifth round.

These kids. These crazy, heroic kids. Liverpool’s FA Cup dream continues, after one of the most remarkable wins in the club’s history. Shrewsbury Town came to Anfield looking for an upset. They got one. Only it was at the League One side’s expense. Actually, to call this an U23 side would be an exaggeration. Seven of Critchley’s team were teenagers, and three –  Liam Millar, Adam Lewis and Jake Cain – were debutants. The average age of the starting XI was 19 years and 102 days. The captain, Curtis Jones, was the youngest Liverpool have ever selected in a competitive game, and what a performance the young Scouser produced. “Self-belief is probably not one of his weaknesses,” Critchley had suggested on Monday, and after 90 minutes here we knew exactly what he meant. Jones is a star of the future, and this display underlined it. He took responsibility, he carried the ball, he tried his flicks and his tricks and he drove his side on. "A leader on the pitch," was how teammate Pedro Chirivella, outstanding in the centre of midfield, described the 19-year-old. It was a goal Liverpool merited, too. From Caoimhin Kelleher in goal to the tireless Liam Millar in attack, they were heroes. Jones was brilliant, Chirivella too. Ki-Jana Hoever and Sepp van den Berg turned in performances that their compatriot, Virgil van Dijk, would have been proud of. Williams and Lewis were outstanding at full-back, while Cain, Elliott and Leighton Clarkson played with a potent mix of youthful abandon and tactical discipline. They, and Critchley, deserved every second of the ovation which greeted them at the final blast of referee Andy Madley’s whistle. "It was a release of emotion," Critchley said, having been mobbed by his players in front of the Kop. "Let's be honest, it'll probably never happen." No wonder Liverpool fans believe their club is special. Time and again, Anfield produces these moments, these rub-your-eyes and ask-the-person-next-to-you-did-that-really-just-happen moments.

Anfield has seen an awful lot over the years, but this was unparalleled. The Reds youngsters, helmed by U23s boss Neil Critchley, produced a performance to remember to secure victory against Shrewsbury Town in their fourth-round replay. Adam Lewis and Chirivella made a beeline for Critchley, bear-hugging the U23 boss who was then mobbed by the remainder of his players and went on to salute the Kop. Boy, had they deserved this moment, sticking to the principles that have been ingrained from the first team right through to the youth levels. This was a triumph for the Academy as much as anything else. The Reds have now, in different circumstances, given us three games to remember – the win over Everton, the draw at Shrewsbury, and now this. For the team – fearless, imaginative, bursting with desire – this will be a landmark occasion.

If the unfortunate Williams’ own goal was decisive, it would be inaccurate to say it was the only difference. When the captain for the evening, Jones, attempted a rabona cross, it was clear which side possessed all the confidence. It was the whole package that impressed more than Liverpool’s individual performances, although it was no surprise Welsh youth international right-back Williams – who must surely have grabbed Ryan Giggs’ attention ahead of this summer’s European championships – hit the diagonal cross in the build-up to his Shrewsbury namesake’s critical error. Liverpool’s season has been extraordinary enough. The contribution of the teenagers in both rounds of the FA Cup have added to the perception the spectators no longer turn up for mere football games in this venue; they are being treated to history.

Liverpool started with an average age of 19 years and 102 days. Yet there was nothing uncanny about their performance, with what amounted to an U19 team showing their opponents how to control play and pass the ball, with 75 per cent possession for much of the contest. They created chances too, with man of the match Williams proving a huge threat from right back…and eventually providing the ‘assist’ which produced an unfortunate own goal from the visitors 15 minutes from time. This Wales young international has such a huge future in the game.

On this day: Reds score seven, European wins and a Coates stunner