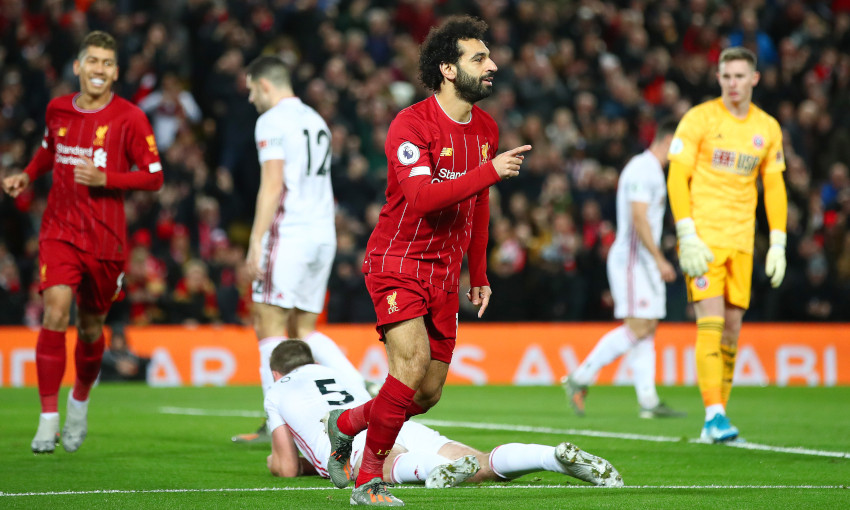 Liverpool started 2020 in fine style with a 2-0 win over Sheffield United at Anfield on Thursday night.

Mohamed Salah netted the Reds' first goal of the New Year and Sadio Mane made sure of the victory in front of the Kop during the second half, consolidating their advantage at the summit.

There will surely be only plaudits after this emphatic dismantling of Sheffield United that maintained the 13-point lead at the top of the Premier League. Liverpool are now one win away from making the best start to a league campaign by any team ever in English football history. Such was their dominance here, they completed a whopping 969 passes – the most they have achieved since such statistics were being gathered. It's worth going through Liverpool's second goal, a move of pure beauty that encapsulates everything about this remarkable, exhilarating team. Alisson Becker throws the ball to Andy Robertson, the left-back instantly moving possession down the flank towards Mane. The Senegalese then sprints full pelt for 30 yards before passing inside to Salah on the edge of the area. Salah takes one touch before, while falling, playing a reverse pass into the area towards Mane, who hasn't stopped running. Henderson saves the initial effort, but the forward prods home the rebound. Twelve seconds from front to back, job done. Stupendous.

When it became apparent that Naby Keita wasn't going to be able to take his place in the starting line-up due to injury, Klopp might have been expected to go like-for-like by bringing in Adam Lallana. Instead, the Liverpool boss opted for a slightly 'stiffer' midfield, asking the ever-reliable James Milner to replace his No.8 in the middle. The reasons for that are obvious: who better to come in for an unexpected start than a man who treats every warm-up, every training session, every game like it is his last? Those commitment levels are exactly why the Yorkshireman did not let his manager down here, putting in a typically fine performance against a handy Sheffield United engine room. In playing this game, Milner also clocked up his 204th appearance for the Reds - more than he has made or is likely to make for any other club in a trophy-laden career. He can now justifiably be considered Liverpool through and through; what a compliment to both player and team that is.

Not even injuries can halt this Liverpool team, it seems. The Reds' list of absentees continues to grow, but so does the belief that this, finally, will be the year their long wait for a league title comes to an end. Klopp's side began 2020 as they had spent most of 2019; winning. Sheffield United were the latest victims, beaten 2-0 at Anfield as the Premier League leaders restored their 13-point advantage at the top of the table. Mane's goal all-but killed the game as a contest, Liverpool fairly cruising to their fifth straight league clean sheet. Since Joe Gomez joined the imperious van Dijk at the heart of Klopp's defence, they have barely looked like conceding. Both Gomez and Van Dijk, friends off the field as well as partners on it, were exceptional here. So too, were Jordan Henderson and Gini Wijnaldum. If there is a silver lining to the cloud of the injuries, it is that most of Klopp's go-to men, in defence, midfield or attack, are still standing.

Manchester City were the last team to inflict a top-flight loss on Jurgen Klopp's juggernaut a staggering 12 months and 37 games ago. The Merseysiders are now 13 points clear with a game in hand, as they relentlessly hunt down the major honour to have narrowly eluded them in 2019. A club-record haul of 97 wasn't enough to seal the title last season and that painful near miss has sparked a state of no surrender from this side. Liverpool can afford to drop points, but refuse to. The champions of Europe and of the world are another game closer to claiming the status they have coveted above all for three decades: champions of England. Wilder's team are terrific with so many varied threats, but they were well nullified here. "They won every first ball, every second ball, ran forward and ran back," the visiting manager conceded in his post-match TV interview. "They had the humility and desire to do that as world champions. I love everything about them!"

View from Sheffield United: 'City game gives us a blueprint for Anfield'

The view from Sheffield United: 'Flanks could prove decisive'