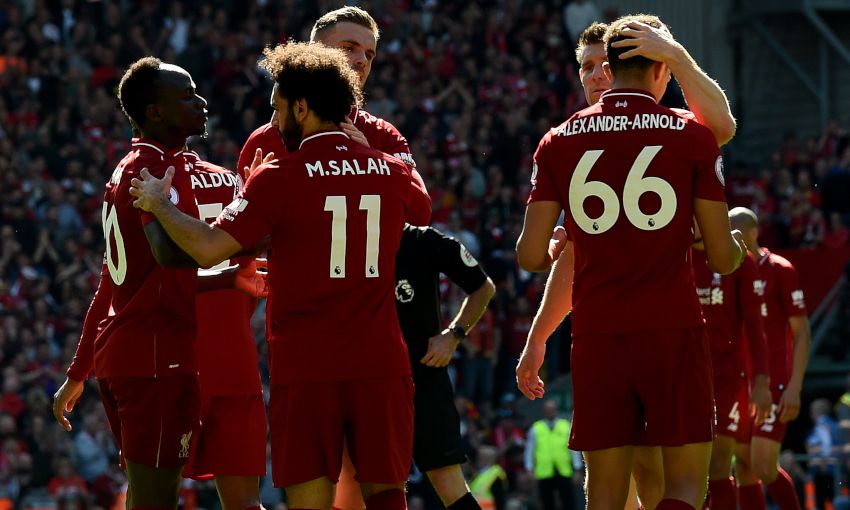 Liverpool finished as runners-up in the Premier League title race after a final-day 2-0 win over Wolverhampton Wanderers at Anfield.

Despite losing only one top-flight game all season and claiming 97 points, the Reds ended in second place as Manchester City retained their crown by one point.

Liverpool, who signed off with nine successive league wins, couldn't have given any more. This has been a truly Herculean effort – 97 points, 30 league wins and just one solitary league defeat. No team in top-flight history has ever hit those heights and not walked away clutching the silverware. Liverpool have simply had the misfortune of being up against a formidable opponent in City, who finished the campaign with 14 straight wins to be crowned champions by a single point. It's another agonising near miss for the Reds' collection. Another tale of what might have been. But this time it feels different. This isn't a false dawn. Klopp's Reds aren't going anywhere. Their best years lie ahead of them – they are only going to get stronger.

Huge congratulations must go to the men from the Etihad, who got over the line having won 14 games in a row, and 18 of their last 19. Some achievement, some team. They have needed to be, to see off this Liverpool side. How can a team collect 97 points, win 30 games and lose just one, and end up as losers? Liverpool's pain is softened by their forthcoming Champions League final, but they know that in pretty much any other season, against pretty much any other rival, they'd have been crowned champions weeks ago. They dropped just 17 points all season. Liverpool should still be proud. The ovation they got at the end here tells you what Reds fans think of their team. They adore them, and rightly so. What memories they have been given, what a ride they have been taken on. What fun they've had along the way.

There was nothing but hope as the full-time whistle sounded at Anfield to confirm an incredible 97-point haul, and for good reason. Inevitably, the Kop instantly turned its focus to European matters – there is a Champions League final on the horizon, after all. But that was simply an expression of excitement over what is to come, rather than an attempt to numb the pain of what had gone before. Thirty-eight games, just one defeat, the club's best ever Premier League campaign – how could any of this be greeted by sadness? And, as far as these supporters are concerned, the major trophy this team deserves is simply waiting for them in Madrid. Should that be collected with victory over Tottenham, thoughts can then turn to how to improve on a remarkable domestic campaign.

It will eventually dawn that this is a Liverpool team which has only finished second to one of the best and most expensive squads in British history, having recorded the third-highest points total ever, while also managing to reach the Champions League final for the second season in succession. In each of the four campaigns where Jurgen Klopp has led Liverpool, the last game of the season has mattered. There was the Europa League final and the securing of a top-four finish which opened the gate to Europe's elite competition, before those two finals which have kept each of the last two seasons going longer than any other team in England. Klopp has not only made Liverpool competitive again, he has made them fascinating. Even if you do not support Liverpool, you cannot ignore them. They are relevant.