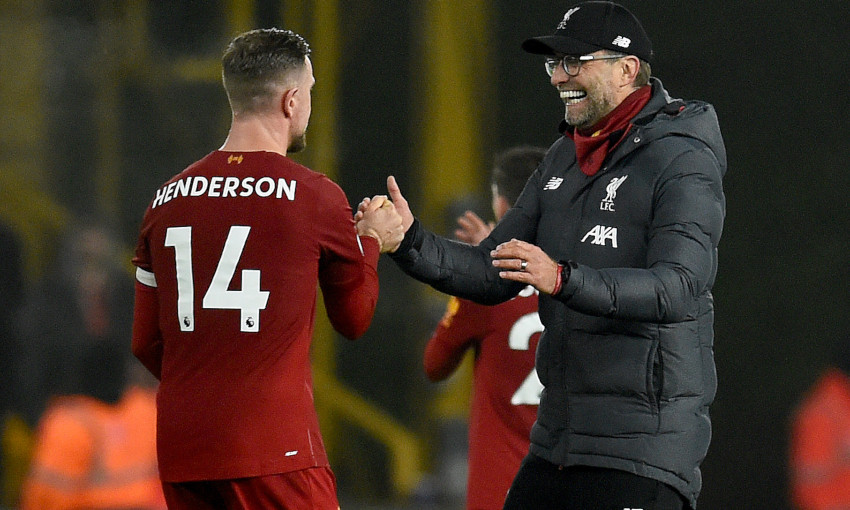 Liverpool went 16 points clear at the top of the Premier League once again after a 2-1 victory away at Wolverhampton Wanderers on Thursday night.

Jordan Henderson opened the scoring for the Reds with a header from yet another Trent Alexander-Arnold corner, and despite Raul Jimenez levelling for the home side, Roberto Firmino curled in a brilliant late winner.

Well, what is there left to say about this Liverpool team? Just when you thought that the party had to end, Jürgen Klopp’s side find a way to turn the music back up. Just when you thought they were out, they pull themselves back in. How do they do it? How do they keep digging out these wins when everything tells you that this, finally, is the night when their luck runs out? With six minutes left, Firmino drew back his left foot. Goal. Bedlam. Firmino is very much Liverpool’s away-day specialist this season. All of his goals have come away from Anfield. This, his 10th of the campaign, was as precious as any. No surrender. Not just yet. The 16-point lead at the top of the table is restored, and can be extended at West Ham on Wednesday as the Reds play their game in hand. By the time Manchester City next play in the league, the gap could be 22 points. Honestly. If January was to be month to test Liverpool, to stretch them, well they have risen to the challenge. This was their fifth win of the month, each of them vital, each of them requiring every ounce of courage, spirit and togetherness. They rarely do it the easy way, this team.

Henderson embodies the magnificent team he captains: the will to win, the relentless pressing, the energy, passing and utter determination not to concede ground, goals or points. Henderson is the beacon lighting the way for Liverpool to reach their first league trophy in 30 years. Others contributed immensely here, whether Alisson’s saves, Virgil van Dijk’s interceptions or Roberto Firmino’s finishing, but in truth Liverpool managed their 14th consecutive Premier League win because of Henderson. He went in for a header, scored with his shoulder, and was head and shoulders above everybody here. He stood firm when Wolverhampton Wanderers whipped up a storm in the second half, and with six minutes remaining provided the assist for Firmino to ensure the win. At the final whistle, Henderson raised his clenched fists to the misty skies in celebration, armband gripping his left biceps, a bulging vein in his neck, catching his breath after another intense shift of work.

What more is there to say? Are there any unused superlatives left? In the absence of fresh words, perhaps it’s wise to borrow Kylian Mbappe’s recent ones. “Liverpool are like a machine,” the Paris Saint-Germain star said. “They win, they win, they win.” Yes, they’ve done it again. At Molineux on Thursday night, the league leaders came, scored twice, sweated a bit, but ultimately conquered. Liverpool have not lost a game in the division for 385 days. They have collected 94 points out of the last available 96. This is Liverpool and they always find a way to win.