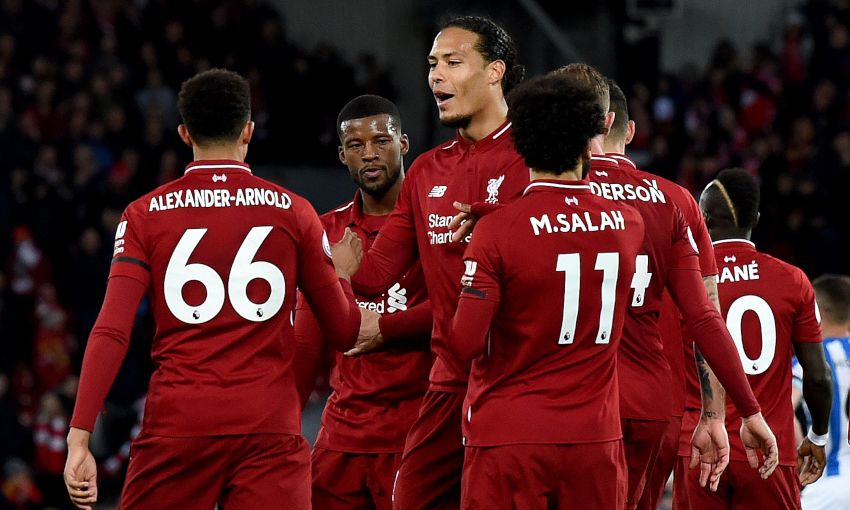 Mohamed Salah and Sadio Mane both scored twice as Liverpool put Huddersfield Town to the sword with a 5-0 win at Anfield on Friday night.

Naby Keita was also on the mark with the opening goal inside the opening 15 seconds - the fastest the Reds have ever scored in the Premier League era.

Jürgen Klopp's message got through loud and clear. Having defiantly declared that the Premier League title race was far from over, Liverpool responded to his rallying call with a dazzling demolition job on an exhilarating night at Anfield. If Manchester City thought they had broken the Reds' resolve with that midweek win at Old Trafford they were sadly mistaken. There was no sense of deflation here. How could there be? There's far too much to enjoy and admire. Liverpool remain one powerful, unified force charging towards the finish line. Kopites still believe and rightly so. In regaining top spot, the Reds heaped the pressure back on Pep Guardiola's side ahead of their tricky trip to Burnley on Sunday. The outstanding Naby Keita got the ball rolling with Liverpool's quickest goal in Premier League history. The deadly duo of Salah and Mane then struck two apiece as they continue to battle it out for the Premier League Golden Boot. Salah is one clear of his teammate on 21. Full-backs Andy Robertson and Trent Alexander-Arnold once again underlined why they are in a class of their own in the top-flight. Their contribution has been huge. Remarkably, they now boast 24 assists between them in all competitions with Robertson winning their personal duel by two. There was also the heart-warming sight of Alex Oxlade-Chamberlain making his eagerly-awaited comeback – a year and two days after the heartbreak of suffering a serious knee injury against Roma. This was a night packed full of positives.

It’s not just the title race which is going down to the wire. The battle for the Premier League Golden Boot is hotting up too. And as with the big prize, Liverpool are looking to land it. Heading back to the top of the table, for 48 hours at least, the Reds had far, far too much for Huddersfield here, administering a 5-0 thrashing that, had it been a boxing match, would have been waved off inside 20 minutes. Or 20 seconds, maybe. Keita’s goal, timed at just 15 seconds, set Jurgen Klopp’s side on their way. After that, it was down to the familiar faces to have their fun. Mane headed home a second midway through the half, a goal which took him level with Salah, Pierre-Emerick Aubameyang and Sergio Aguero at the top of the Premier League scoring charts. Not to be outdone, Salah got in on the act before half-time, his assured lob taking him to 20 in the league for the second campaign in a row. Not since Luis Suarez in 2014 has a Liverpool player managed that particular feat. Liverpool had two players on 20 or more that season, and they can boast the same this time around too as Mane headed home his second of the night from a Jordan Henderson cross on 66 minutes. He should have had another soon after, too, only this time he headed against the post from close range. That could prove costly in the race for the Golden Boot, as Salah regained top spot soon after, converting another Robertson assist in front of the Kop. The Scot now has 11 league assists for the season, tying a Premier League record for a defender. If there's a better left back around right now, he's well hidden.

All Liverpool can do now is win and hope. The first part of their title duty was fulfilled in rampant and historic fashion as Huddersfield were routed at Anfield. Top of the Premier League with two to play, their longing for a favour turns to Burnley on Sunday. Manchester City are acutely aware that Jürgen Klopp’s team will not go quietly. Robertson has an internal competition with Alexander-Arnold over which full-back will provide the most assists this campaign and the 20-year-old responded in kind on the stroke of half-time. The right-back floated a delightful ball in the channel between Kongolo and Erik Durm for Salah to sprint through on goal. Huddersfield’s goalkeeper charged out and the Eygpt international accepted the invitation to lob Lössl to score. Records have tumbled throughout Salah’s time at Anfield but a 68th goal in a century of Liverpool appearances is a staggering achievement.

With their fate in City’s hands, the Reds can do no more than win and hope these days. But, in turning Huddersfield Town over with ease this evening, they at least kept up the most important part of that particular bargain. Treated to another remarkably dominant performance from the hosts, Anfield reserved its biggest cheer for the introduction of Oxlade-Chamberlain late on. A popular figure in the dressing room and among fans, the midfielder has had his mental strength fully test during a gruelling year in rehabilitation. But it must all have seemed worth it as he strode out onto the pitch to a hero’s welcome from Kopites. And the sharpness of his performance suggested that Oxlade-Chamberlain could even have a role to play in some huge remaining fixtures.

The view from Huddersfield: How we might change for Reds visit