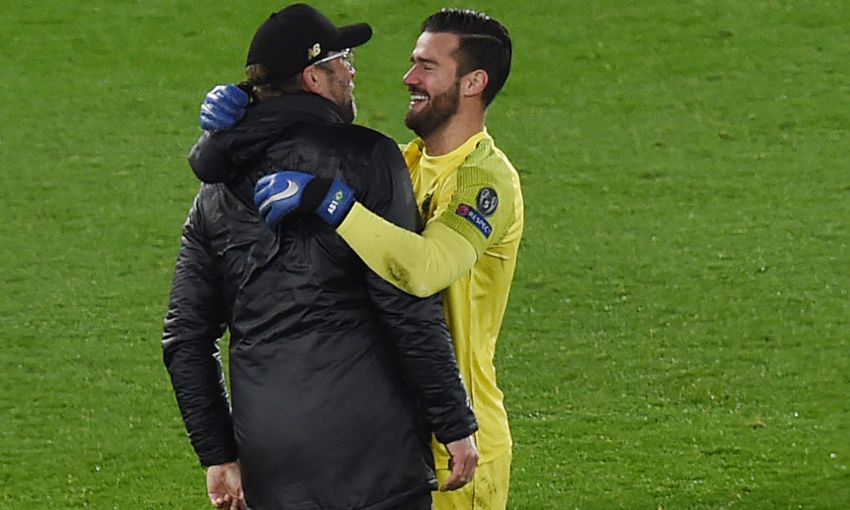 Liverpool reached the knockout stages of the Champions League after a 1-0 win over Napoli at Anfield on Tuesday night.

Mohamed Salah scored the only goal of the game and goalkeeper Alisson Becker made an incredible stoppage-time save as the Reds clinched runners-up spot in Group C.

No wonder Virgil van Dijk made a beeline for Alisson Becker at the final whistle. Mohamed Salah was the match-winner on another unforgettable European night at Anfield but the jubilant Kop's debt of gratitude truly belonged to Liverpool's No. 1. For most of the night the biggest danger to the Brazil international was frostbite as he stood and watched Jürgen Klopp's side boss proceedings against Napoli. But a combination of wasteful finishing and the heroics of David Ospina meant that Liverpool's Champions League fate remained in the balance. Anxiety reigned. A late equaliser and the Reds would have been dumped into the Europa League. The feelgood factor from the thrilling progress of recent months would have been seriously dented by a gut-wrenching setback. Deep into stoppage time hearts were in mouths. The ball flicked off substitute Fabinho and dropped kindly to Arkadiusz Milik. The Polish striker looked destined to score but Alisson spread himself and pulled off a stunning save. Anfield erupted in gleeful appreciation. His hulking frame makes the goal look smaller. He has lightning quick reactions, he commands his box expertly and instils confidence rather than uncertainty in those around him. Liverpool sit top of the Premier League thanks to his huge contributions in the recent wins over Everton and Burnley. Now he has helped write another memorable chapter in the Reds' rich European history. Talk about taking the fast-track to Kop icon status. Klopp had challenged his players to right the wrongs after enduring three successive away European defeats and to a man they delivered.

At some point the superlatives will run out, surely? Liverpool’s Champions League hopes are still alive, and as so often they have Salah to thank. On the big stage, with the stakes high, the Egyptian delivered. Again. His first-half goal gave Jurgen Klopp’s side what they wanted, what they needed. Their 1-0 win means it is the Reds who join Paris Saint-Germain in the last 16, while Napoli must contemplate a New Year spent in the Europa League. Tough on the Italians, but few inside Anfield will care. Finalists last season, Liverpool will hope something special is brewing once more. What is it about this competition and the men in red? What is it about this competition and Salah, too? He’s been on Merseyside less than 18 months and he has 14 Champions League goals. Only Steven Gerrard, in the club’s history, has more.After his hat-trick at the weekend, only one goal was needed this time. Some goal, mind. At Anfield it is 35 in his last 38 appearances. In 2018, he has 34 in all competitions. Not since Robbie Fowler, who scored 37 in 1996, has a player managed more in a calendar year for Liverpool. He’s the worst one-season wonder in the world, this lad. He was not the sole hero by any means. Liverpool would be out were it not for the brilliance of Alisson, whose sprawling save from Milik in stoppage time was worth every penny of the fee paid to Roma in the summer.

And so a winner-takes-all final group game against Napoli was perhaps nothing less than they should have expected. In the end, all that mattered was getting through, and that’s precisely what Klopp’s team managed to do courtesy of a 1-0 win. Alisson arrived at Anfield billed as one of the world’s best goalkeepers and has wasted little time in adding to that reputation. The Brazilian is making jaw-dropping saves with increasing regularity of late, and none more important than that seen in the final minutes tonight. Milik looked a dead-cert to score when Fabinho’s header reached him but, before he could pull his leg back, Alisson was on top of him to smother the shot. It was a contribution just as vital as Mohamed Salah’s goal, one that strengthened Alisson’s growing claim to be the best in his position in the world.

Liverpool's win over Napoli by the margin they required to reach the Champions League knockout phase leaves their season in perfect shape. Klopp's side are unbeaten at the top of the Premier League after 16 games and now they enter the European territory that suits them best as this tournament now embraces the two-leg format. So how big could this night be as Liverpool's campaign prepares to move to the next level? If Klopp and Liverpool had plotted a map of their campaign before the season began, to reach this point as Christmas approaches would have been the dream scenario. Liverpool have now moved ahead of Premier League champions Manchester City at home and somehow navigated a route which included three away losses - to Napoli, Red Star Belgrade and Paris St-Germain - to advance from a formidable Champions League group. And, to add to the mood of joy around Anfield, Liverpool are now showing signs of the form that made them so irresistible to watch so often last season. Liverpool were, to their huge credit, often grinding out results earlier in the season but in recent times they appear to be moving into top gear. Salah is back to the form that made him an instant Anfield superstar last season while in Van Dijk they have one of Europe's premier defenders, although he will miss Liverpool's next Champions League game through suspension. These two, in conjunction with outstanding members of Anfield's undercard such as left-back Andrew Robertson, have got Liverpool's fans dreaming again on two fronts.

It was a night that served as a reminder that football is largely defined by recruitment and in this case, reach. Alisson's injury-time save from Milik seemed to go on forever. There was the length of the cross, the distance it travelled from Jose Callejon’s left foot. There was Milik stumbling and the sense of the moment slipping away from him, though nobody knew for certain. Liverpool might have deserved elimination because of the poverty of their away form in this group but they did not deserve to lose or even draw this game. It should have been 5-1 by now. It had been the same at Burnley last Wednesday. It was 2-1 to Liverpool, it would end 3-1 but it could have been 2-2 had it not been for Alisson, whose reach would deny Ben Mee at Turf Moor before his capacity to make himself into a human starfish ended Napoli’s Champions League campaign. This save was pure instinct. There had been no opportunity for thought. He had to make himself big. It is what Peter Schmeichel would have done.