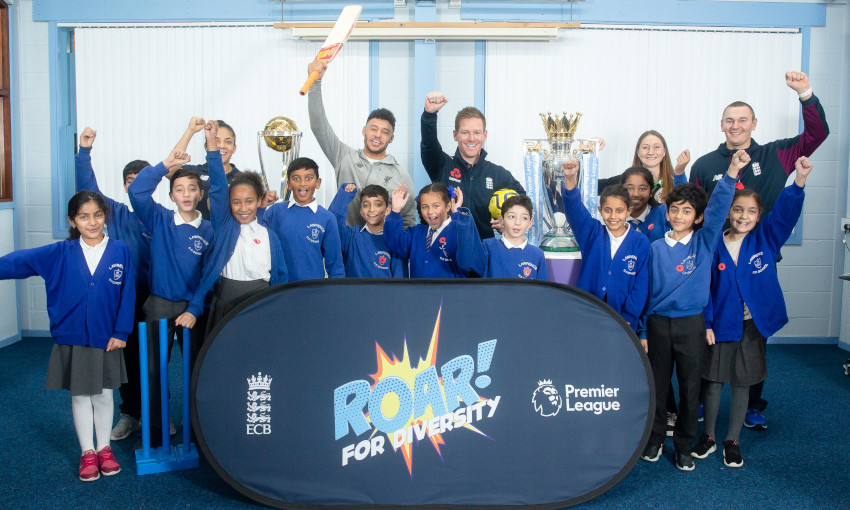 To mark the launch of the new campaign 'Roar! For Diversity', the Premier League and England and Wales Cricket Board have teamed up to educate young people on the importance of diversity in sport.

The new online resource aims to encourage children aged between seven and 11 to think about what diversity means to them, what it may look like and the skills and qualities that different people can bring to a team.

The pupils were given the opportunity to enter the campaign's competition, which involves creating an advert to celebrate diversity. All primary schools across England and Wales can enter, with the winning team receiving tickets to a match alongside having the Premier League and Cricket World Cup trophies visit their school.

Each of the sporting stars took part in an open Q&A session with the Key Stage 2 pupils, posed for photos and joined in with groups to complete worksheet exercises and adverts for both the campaign and competition.

They all shared their experiences of diversity, what it means to them and how a diverse team is stronger both on and off the field of play.

Oxlade-Chamberlain said: "The most successful teams bring together players with individual skills and qualities to be able to achieve success as a group.

"The Liverpool dressing room is home to players from more than 20 countries. Everyone brings something different to the atmosphere on and off the pitch.

"The Premier League is for everyone. Using sport to inspire a generation of young fans to celebrate diversity is something I'm proud to be supporting."

England cricket captain Morgan said: "You just need to look at our World Cup-winning side from this summer to understand the strength that diversity brings to a group.

"We are a team from a range of different backgrounds and cultures. By working together, supporting each other and appreciating everyone's abilities and differences, we're definitely stronger together."

Teachers can find more information on how to take part in the 'Roar! For Diversity' competition at LFC Foundation's PLPrimaryStars.com and cricket charity ChanceToShine.org.