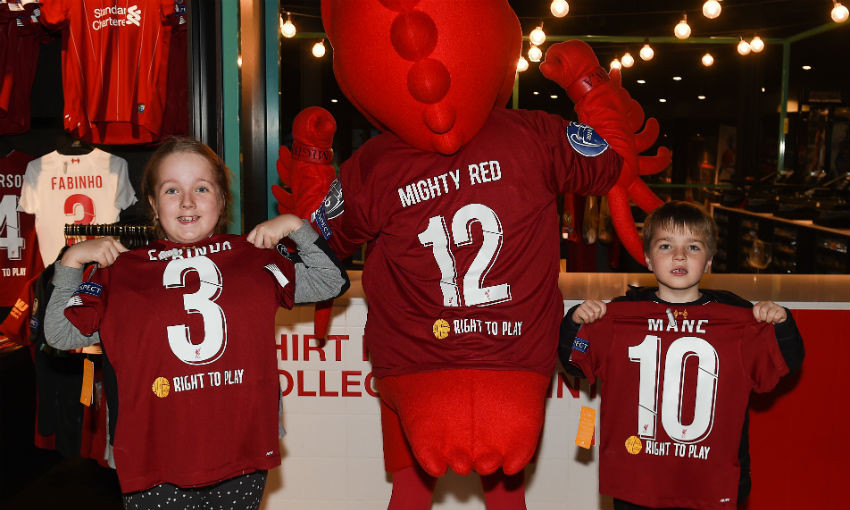 LFC’s mascot Mighty Red surprised a local family at the Anfield retail store and gifted them with European shirts complete with the new Right To Play charity logo ahead of Wednesday’s Champions League fixture with Napoli.

The family - which included Evie aged eight, Isaac aged 10 and their mum Sarah - were selected for a surprise treat from Mighty Red because of their commitment and enthusiasm to the LFC Foundation’s Open Goals programme.

Mighty helped the family print their new shirts as well as his own, which included adding the new Right To Play charity logo. The logo, which first debuted on the Reds’ Champions League shirts during their home leg against FC Salzberg, was added in support of the LFC Foundation’s partnership with Right To Play. 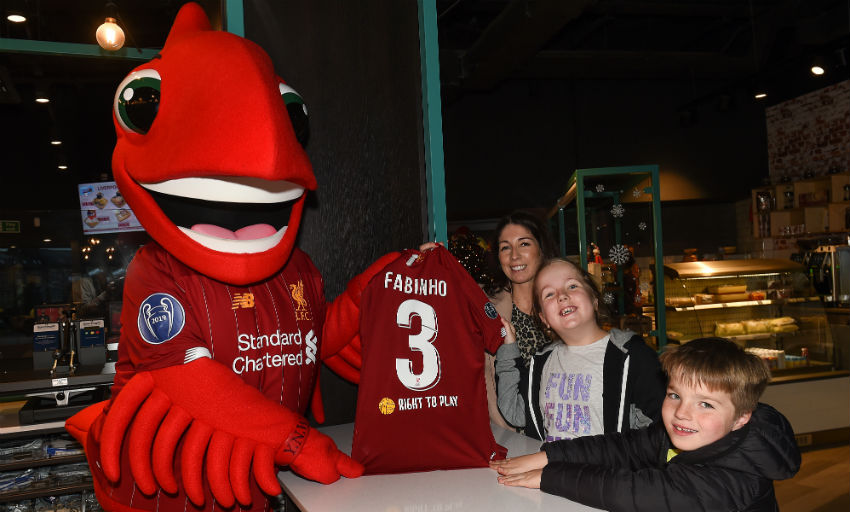 The LFC Foundation’s partnership with Right To Play creates and implements high-impact programmes that benefit children both here in Liverpool and overseas. Joint programmes will be launched initially in Liverpool and Bangkok in 2020 and will help some of the most vulnerable children in the world to overcome the obstacles that limit them so they can unlock their potential and thrive.

For just £5, fans can add the Right To Play patch to their official 2019-20 Champions League shirts when purchasing at a UK LFC retail store or via the online global store. Fans who have previously purchased a European shirt without the Right To Play logo can also purchase it and have it added to their shirt in LFC UK retail stores. Proof of purchase from an official retailer must be provided to enable the purchase and transfer of the logo.

One-hundred per cent of the proceeds raised from the sale of the logo will support the work of the LFC Foundation and Right To Play partnership.

Rob Fairfield, LFC Foundation Open Goals lead coach, who nominated the family, said: “The Jones family have been attending our Open Goals programme for over 12 months. As a family they all get involved with the session, including mum Sarah. Both Isaac and Evie were quiet and shy when they first started coming but over time, they have both developed confidence individually and working as a team.

“They have shown great commitment to the programme and I have also received feedback from their school on their growth in confidence and leadership skills. I am delighted they received this treat - it’s well deserved.”

Matt Parish, director of the LFC Foundation, added: “Having the opportunity to feature the Right To Play logo on the European shirts is fantastic and provides a global platform to highlight our partnership and work with Right To Play to fans worldwide.

“By adding this logo to their shirts our fans can make a big difference by raising funds for the partnership, which will enable us to extend our reach and help transform the lives of many more children through the power of play - both here in Liverpool and overseas.”

LFC to participate in #Morethanfootball campaign