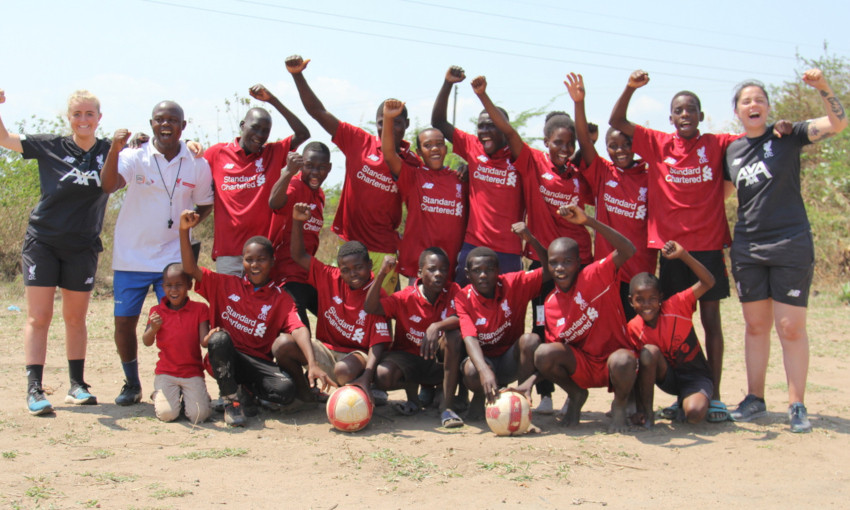 The LFC Foundation headed back to Malawi last month to deliver the final stage of the Health Goals Malawi project alongside the Liverpool School of Tropical Medicine (LSTM).

The joint project, which was launched in 2017, delivers sports-based public engagement activities in Malawi, which allow young people to access health services and education focused on HIV and other sexually transmitted diseases.

Using the power of the LFC badge and the wider appeal of football, the programme engages with local youngsters – in particular, males aged 14-22, who are least likely to access health education and services such as self-testing and treatment plans.

In Malawi, the number of people living with HIV is one of the highest in the world and young people account for 50 per cent of new infections, with incidences highest among 15 to 17-year-olds.

Knowledge around prevention and transmission of disease is essential among young people, who often have low levels of awareness and are therefore more likely to contract HIV or be living with it unknowingly.

Matt Parish, director of the LFC Foundation, said: “We were delighted to head back to Malawi once again to deliver this fantastic project.

“The programme has built an amazing platform for health education in Chikwawa and has ensured sustainability through the training and development of local coaches.

“Working with LSTM and the local coaches out in Malawi has allowed us to engage with such a hard to reach group and we’ve been able to make a real difference to the health and life chances of hundreds of young people in the area.”

25 local community coaches, who were trained by FA Malawi and LFC Foundation back in June, worked alongside LFC Foundation staff to lead carousels of activities including football training and HIV education.

LFC Foundation staff provided feedback, hints and tips to build on the community coaches’ skills and continue their aim of becoming genuine role models in the local community.

All participants were taught how to use a HIV self-test kit and shown a demonstration video featuring Sadio Mane, with those who were old enough given a self-test kit to take home.

In total, over 1,000 HIV self-test kits were distributed to participants and amongst the 5,000-strong crowd, who gathered to watch a Health Goals Malawi squad take on Blantyre-based team, Wizards FC, in the final of the MLW Kafukufuku tournament.

Local coach, Frank Chilongo, said: “The Health Goals Malawi project has not only increased knowledge of HIV amongst young people, but it has also broken down the fear of getting tested for HIV.

“Now, if you finish a session without telling the participants any health messages – they are going to ask you, ‘Coach, are you not going to tell us a health message?’ It’s because they are enjoying it, so it’s great for us.”