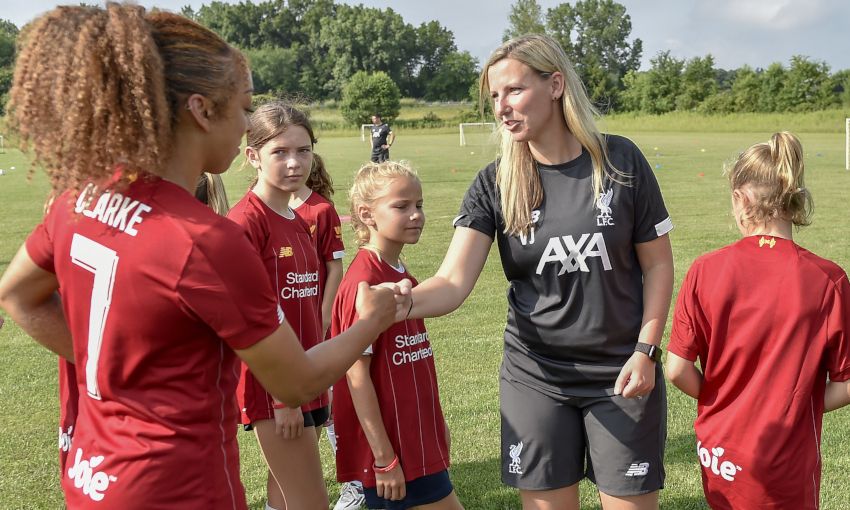 The session marked the launch of a brand new partnership between LFC Women and Joie, which sees the baby gear brand become LFC Women’s official family partner and take an on-shirt position on the tail of their jersey.

Already a sponsor of the men’s team, Joie supports families of all shapes and sizes, promoting values in line with the club’s own family-orientated philosophy.

The new partnership comes as LFC Women embark on their first pre-season tour, also hosted by Joie. The team will visit three cities in the USA alongside the men’s squad, focusing on training and community activities as well as playing matches in South Bend and Boston.

“It’s been fantastic to get out in the community here in South Bend and be involved in today’s soccer clinic,” said Jepson.

“The children were all brilliant and worked really hard with our players and the LFC Foundation coaches to try to improve their skills.

“We’re also thrilled to have Joie on board as our tour host and new principal partner and we’re looking forward to working with them on more community projects like this going forward.”

As the morning of coaching came to an end, there was a surprise in store for the youngsters as they were each presented with a brand new LFC home shirt before receiving invites to Thursday’s game between LFC Women and Cleveland Ambassadors at Notre Dame University.

The Reds are currently Stateside as part of their preparations for the 2019-20 season, with both the men’s and women’s teams heading to Indiana, Massachusetts and New York over the nine-day trip.