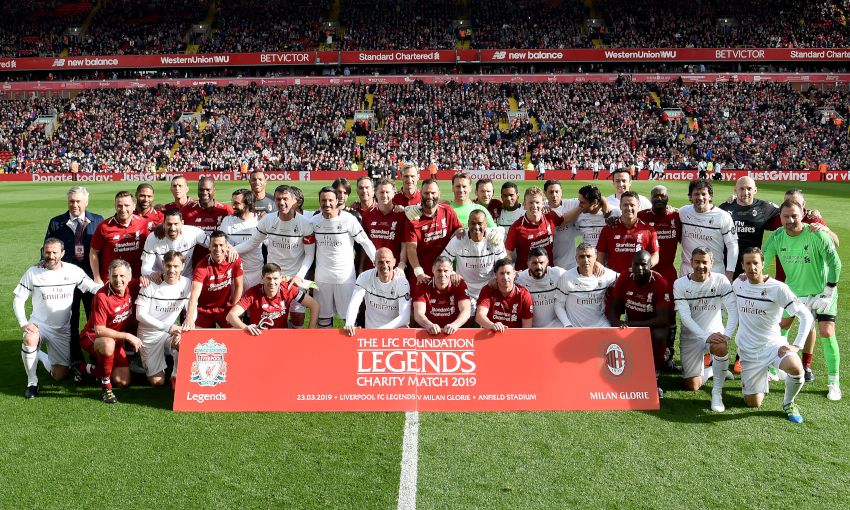 LFC Foundation today announced that the legends charity match held at Anfield in March has raised £800,000.

The club’s official charity would like to extend its sincere thanks to the LFC family, who once again showed tremendous support for the fixture, which saw the Liverpool FC Legends secure a 3-2 victory over Milan Glorie.

Proceeds raised from the sell-out match will fund LFC Foundation programmes, which support children and young people across Merseyside and beyond, as well as local charities.

To date, donations have been made to the Owen McVeigh Foundation, which aims to help children who are ill with cancer and their families in Merseyside.

A £36,000 donation was used by the charity to fully refurbish a holiday lodge they own in the Lake District. Children undergoing treatment and their families, as well as bereaved families, can use the holiday lodge free of charge.

Zoe’s Place, which provides palliative, respite and end of life care to babies and infants suffering from life-limiting or life-threatening conditions, received a £50,000 donation to help fund their vital work.

And £100,000 was made available to local charities in Merseyside via the LFC Foundation Community Fund, which is run in association with a local charity, Radio City’s Cash for Kids.

Registered charities and other constituted groups who meet the eligibility criteria can apply for grants of up to £3,000, and potentially more in exceptional circumstances.

Matt Parish, LFC Foundation director, said: “On behalf of the LFC Foundation I would like to say a massive thank you to all the fans who supported our charity match this year.

“I am so proud of the continued support the LFC family shows us and how together we can make a positive difference to thousands of children and young people across Merseyside and beyond.

“There are more planned initiatives in the pipeline and local charities who will benefit from these funds, which we will be sure to share in the near future.”