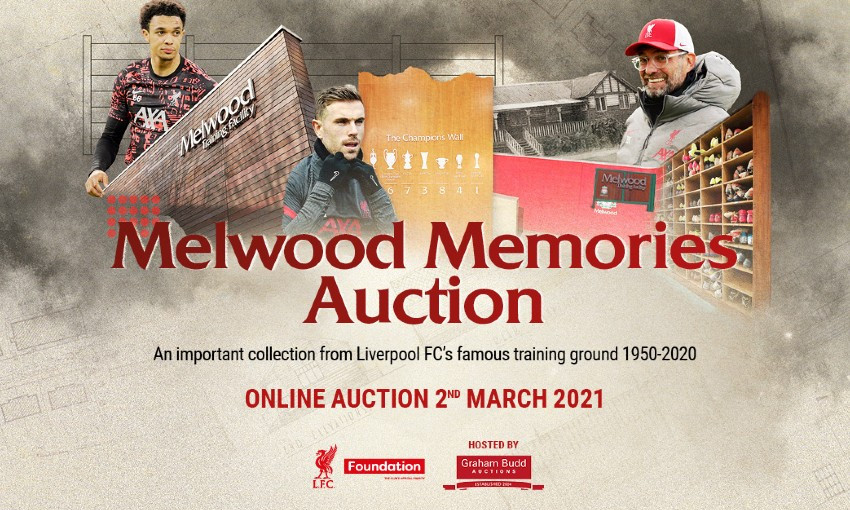 Liverpool FC supporters will have the opportunity to own a piece of Reds history as the club bids a final farewell to Melwood in a special online memorabilia auction.

The unique event, which will be held on Tuesday March 2, will see more than 360 items from the 70 years the club spent at its historic former training ground go under the hammer and be auctioned off to fans.

A special selection of items from the sale will be auctioned specifically to raise funds for the club's official charity, LFC Foundation. The monies raised, together with a club donation from all the auction proceeds, will provide much-needed food and support the ongoing work around physical and mental wellbeing in the local community, particularly during the COVID-19 response.

The driving force behind this occasion was the development of the new AXA Training Centre, which for the first time brings Liverpool's first team and Academy players together on one site. This hugely significant project saw the era of Melwood, which was the day-to-day home of many of the club's finest players and teams, come to an end.

Items that will be up for auction include the whiteboard used by Jürgen Klopp to reveal his team selections and demonstrate tactical instructions, the 'Champions Wall' that was present in the main reception area and displayed the club's trophy tally, and the desk and backdrop that were used for press conferences.

Liverpool legend Ian Callaghan said: "What a momentous occasion this is, as we say a final goodbye to our beloved Melwood and look forward to a new era and what our future holds at the AXA Training Centre.

"Melwood will always hold a special place in my heart. It was our home for over seven decades and saw us through some of the biggest moments in our club's history - from the ultimate highs to the challenges and tests we have faced together over the years.

"This is such a unique opportunity for supporters, allowing them to bid for their own piece of Liverpool FC history that they can keep forever."

Stephen Done, Liverpool FC curator, said: "This auction is a very special event to mark the end of an important era. The last 70 years have been a huge part of Liverpool Football Club's rich history, with so many memories and incredible moments to share - and not forgetting all the incredible players that have passed through those doors at the famous training ground during this era. Without their tremendous talent and contribution to the club, we wouldn't have such prestigious memorabilia and fantastic memories.

"The items on offer in the auction are both unique and diverse - from the world-famous Champions Wall that greeted you as you entered the main reception area, to the all-important press conference desk that saw news from the club shared with supporters around the globe."

The auction will be hosted by Graham Budd Auctions, which hosted the club's last auction back in 2018 when hundreds of items from Anfield's old Main Stand went under the hammer.

Supporters wishing to take part in the online auction must register their interest here.