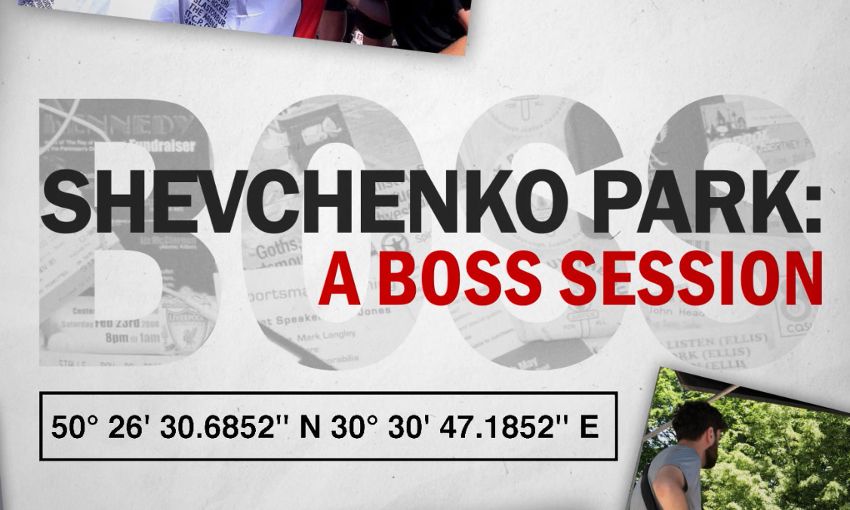 Long before they conquered Kiev, the lads at BOSS were more concerned with dissecting trainee fashion and the fine art of going ‘Thee ASDA’.

Before there was Jamie Webster and world tours, wild nights in the Baltic Triangle and sold-out super shows on the city’s waterfront, there was BOSS Magazine.

On the surface it was a black-and-white mini-bible of footy, fashion and music.

But to delve within was to see all aspects of Liverpool life laid bare.

The magazine’s immaculate cover art, celebrating the city, contrasted effortlessly with its raw content, packed full of put-downs and parodies.

So where does Shevchenko Park, the Ukrainian capital’s green lung since 1890, come into it all?

What’s the timeline that takes us from these self-published pamphlets, passed around packed pubs, to the simply surreal scenes we witnessed a decade later in Kiev?

LFCTV had a go at plotting the pathway in the months that followed Liverpool’s Champions League final appearance against Real Madrid in May 2018.

The fact the Reds lost in heartbreaking fashion was inconsequential. In fact, it added to the need to try to document the build-up; to explain the feel-good factor which pervaded.

You can watch our 30-minute programme for free today on LFCTV GO if you register with LFC, with the documentary also airing on the channel at 9pm BST.

Read on below for a summary...

Back to the BOSS Mag, then.

“It was authentic; it was a pound; it was photocopied at first,” explains Daniel Nicolson, one of the three lads who founded the publication in 2007. “Our Saturday culture isn’t just about going to the game; it’s about going to gigs as well.

“So, it seemed natural that after a few years of doing the mag and building up a bit of a following, we would go on to putting on our own gigs.

“In August 2011 we decided to do a start-of-season party at the Static Gallery and we sold out.

“All of a sudden, we realised – not only have we got this magazine on our hands, we’ve got the potential to do gigs as well.” 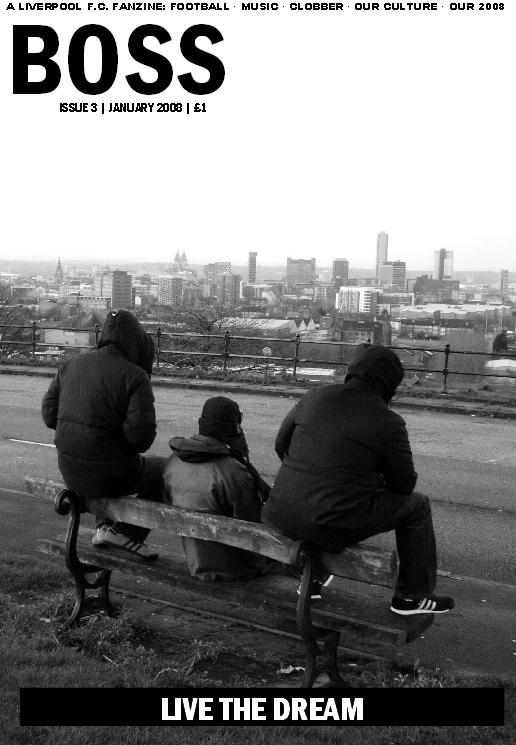 If you subscribed to the cultural ideals that BOSS Mag endorsed, you now found yourself with somewhere to flock to, in town, on a matchday.

The first tentative steps saw John Power, of The La’s and Cast, play to a handful of disciples in OSQA Bar near the ‘Bombed Out’ church.

Before long the attendances ballooned and BOSS relocated to Sound on Duke Street, where the fervour would ramp up to a whole new level.

But not before an extra spark was added into the mix.

A tip-off from a fellow organiser about a ‘kid who gets on one of the coaches and plays guitar’ transformed BOSS Nights for good.

“It must have been 2013-14,” explains Jamie Webster. “I played a few songs. Just songs that I knew everyone would like, and it went down well.” 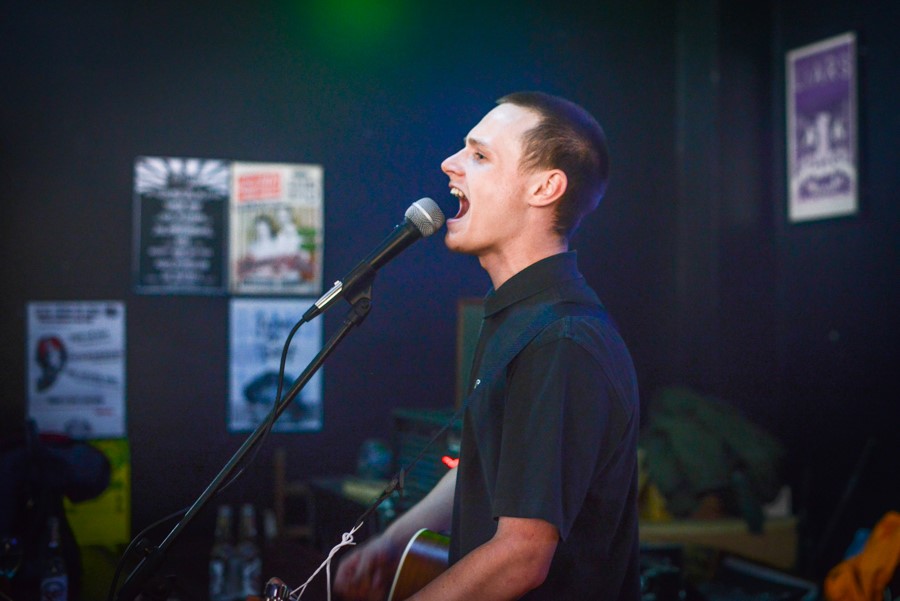 ‘Went down well’ was an understatement.

“The momentum just built around him,” explains Nicolson. “People stopped talking about the BOSS Night. It was, ‘Are you going to see Jamie Webster?’”

He had the skinhead of a street villain but the voice of a Scouse soprano and he was as mad about the Reds as anyone in the room.

So, when he hammered out The Jam and Oasis, and interlaced them with Liverpool chants, the communion with the crowd was explosive.

A rare and unique football culture was bubbling under – and it had the potential to go viral.

“I was just looking at videos of Liverpool fans,” explains the lifelong Kopite in Shevchenko Park.

“And then something popped up along the side. And it was Porto fans. And they were all bouncing to ‘Allez, Allez, Allez’.

“And I thought, ‘We’ve got to get a song to this’. And I really wanted to get one before any of the other English teams picked it up.”

The directive from his good mate Phil was clear; we need to get on this – and fast.

“When I was writing it,” he explains. “I just wanted to put a line in from all the other famous songs that we’ve had in the past, so people could relate to it.”

Hours earlier, dressed in blazing bright orange, Liverpool had run riot on Valentine’s Day in the Estadio do Dragao, blitzing Porto with a five-goal flourish. 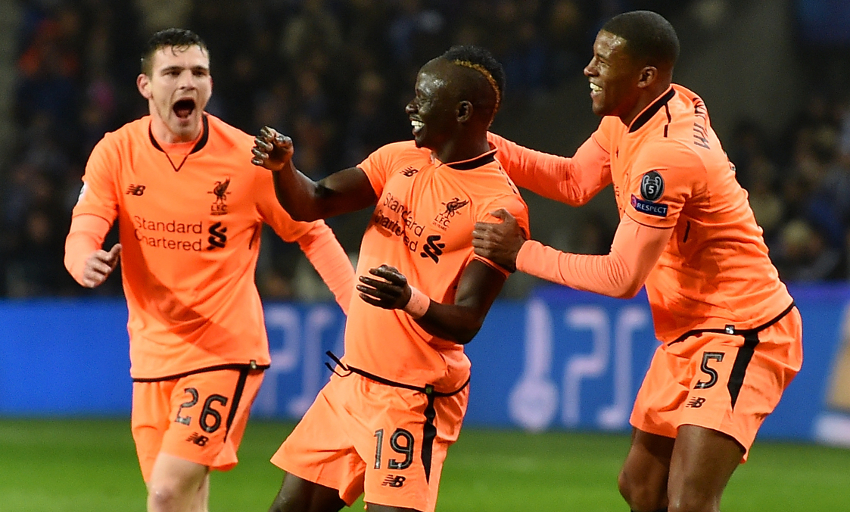 On the heaving concourses, strains of ‘Allez, Allez, Allez’ – the song which Phil and Liam had created – began to spread.

“It first started properly getting going at Porto away,” adds Phil.

Back on home soil after the Porto mauling, he picked up his guitar and strummed a few simple chords.

The Halfway House on Walton Road can be wild.

If you walk down the hill away from Anfield, towards town, and veer to the right it will look you square in the face; all corners and crevices and angles; red brick, black paint, bold.

Split like a horseshoe with a tiny passage between two narrow rooms, there’s space for standing only in the back when Webster is centre stage.

On the night of Saturday March 3, 2018, the windows oozed condensation.

Newcastle United had been dispatched in the 5.30pm kick-off and ‘the Halfy’ was rocking.

Webster wanted to test the water.

“I thought, ‘If everyone gets hold of this now in here, it won’t be long before it gets out there.’”

It captured the occasional glance between mates; the kind of wide-eyed grin that says, ‘We’re onto something here…’

A week later, after a galling loss to Manchester United at Old Trafford, the song got its first airing at a BOSS Night. And, all of a sudden, the defeat was pretty much forgotten.

Beaming orange disco lights simmered through a haze of red smoke at District, silhouetting the bouncing figures on the dancefloor below.

It was bedlam. It was unique. It was mesmerising.

Sunday was spent staring at phone screens, at Webster bobbing on the stage, at the crowd.

Those who had yet to be sucked in by the song; by the discordant early versions inside Anfield and the blurry phone footage from Porto now had a blockbuster guide.

Those who couldn’t figure the tune, or buy into the lyrics, had a mini Scouse Glastonbury set to savour and study.

And when Manchester City came to Anfield three weeks later for the Champions League quarter-final first leg, there was only one song that roared out of raw throats.

Between Phil and Liam, Jamie and the BOSS Nights, District and the Halfy – with a little bit of help from YouTube and Jürgen along the way – a monster had been created…

They’re not quite what you’re after, but the sun tends to be cracking the flags and there’s the small matter of a Champions league final laying in wait.

But in May 2018, with the prospect of an eighth European Cup final in Kiev on the horizon, Liverpool fans were ready for something different.

AS Roma had felt the full force of Anfield in the semi-finals. Mohamed Salah, inspired by his own chant to the tune of Sit Down by James – another effort which gathered pace at the BOSS Nights – terrorised his former team. 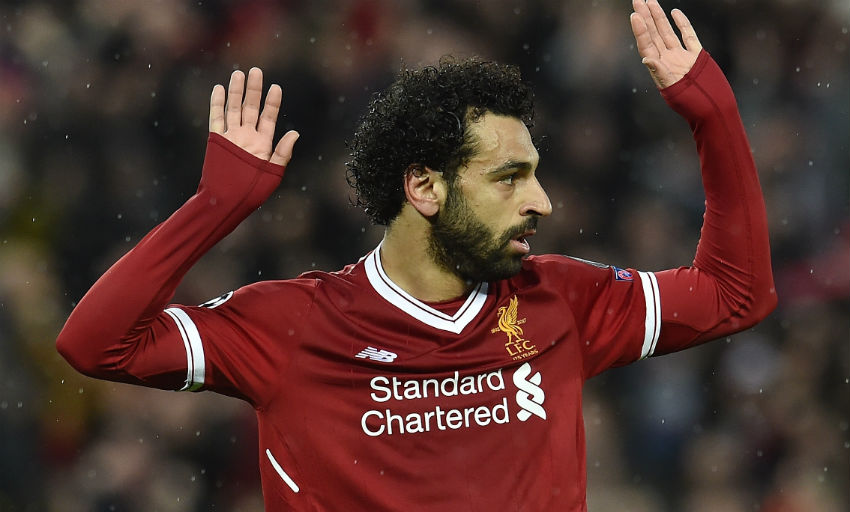 His fellow tormentors-in-chief, Roberto Firmino and Sadio Mane, were lethal at the helm of a side imbued with the manager’s feverish, pulverising attacking approach.

And it complemented the vibrancy that was bubbling off the pitch.

At the Stadio Olimpico, in the second leg of the semi-final, the images beamed back home were of sheer elation. And they were dominated by younger faces.

Streetwise kids, who were eyeing up primary school the last time Liverpool enjoyed a European resurgence in the early-to-mid 2000s, were out in force.

They were vocal, they were fearless, they were on the same wavelength. They went to the match dressed for a music festival. They lived for the BOSS Nights and they had their own modern-day spin on the sort of culture that the BOSS Mag once celebrated.

The noise from Shevchenko Park carried down the wide-open boulevards of Kiev.

Sun splashed every inch of pavement, searing the skin, soothing the senses.

On the outskirts of the park, trees provided precious shade, forming a green canopy for thousands of red-and-white revellers.

The main attraction pulsed somewhere in the background, deep within the park, in a clearing where the fountain stood.

It was a sea of people. 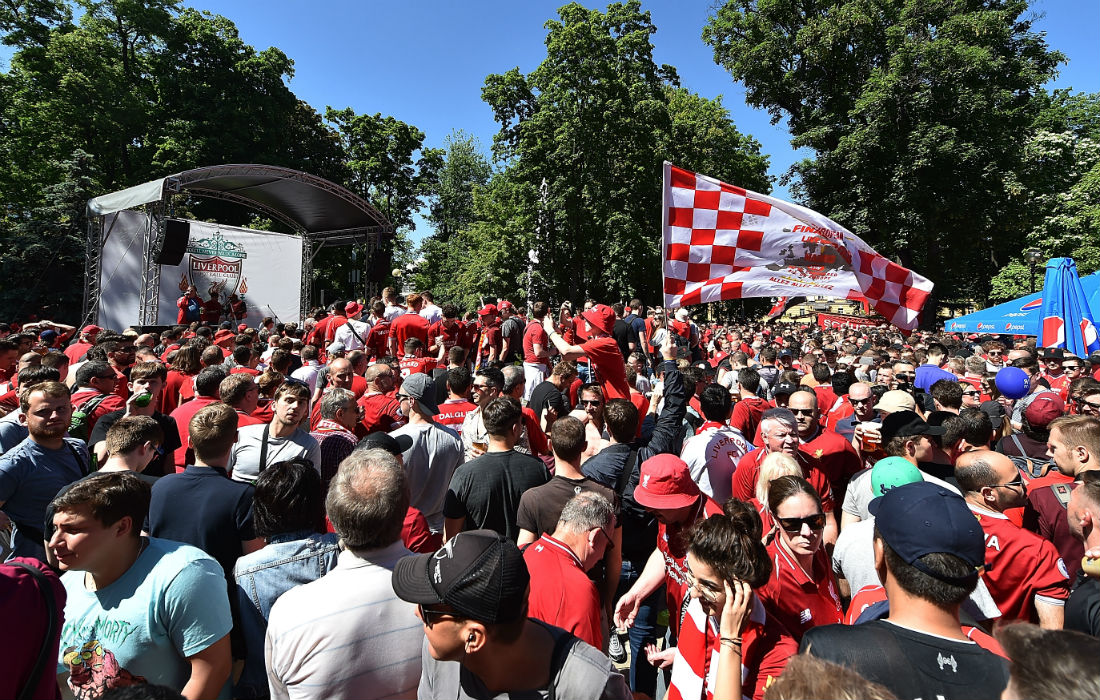 Liverpool FC had been key in organising the event. Lifelong Kopite Tom Cassidy, head of the club’s tourism, was instrumental and influential. He made everything tick behind the scenes while various artists took centre stage.

Redmen TV fired the crowd up before The Anfield Wrap continued the party. John Power performed Cast’s Live the Dream as supporters duly pinched themselves. Peter Hooton joined him on stage for You’ll Never Walk Alone.

Clear blue skies filled with red smoke as Kieran Molyneux bellowed out another BOSS classic – a spin on The Beautiful South classic Rotterdam.

And then Webster took to the stage.

“I grew up listening to Live the Dream,” he explains. “And like I said when I walked out, ‘This is my dream.’”

As he ran through his repertoire, the sun’s rays dimmed into evening light.

Liverpool FC were back in the big time, and it was enough to make your heart bang with overwhelming pride.

The send-off to end all send-offs.

“Hopefully I can feel something like that again,” ponders Webster. “Let’s hope.

“Even if I don’t, I’ll remember that for as long as I’ve got a memory.

“I’ll probably bore people to death with stories about it over the years, you know what I mean?

Watch Shevchenko Park: A Boss Session for free now by registering here, or be sure to tune in to LFCTV at 9pm BST tonight to relive it all over again.