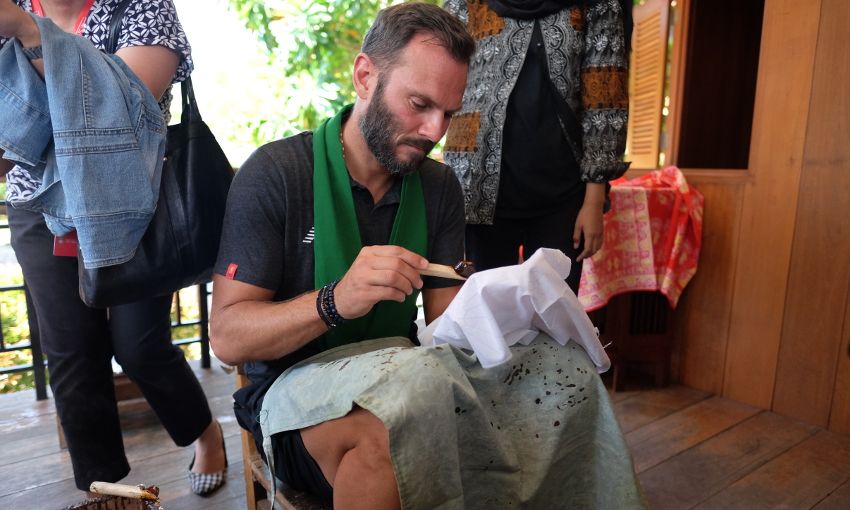 LFC World kicks off in Jakarta in style

Four Liverpool legends took the chance to take in some local culture on Friday morning as part of their trip to Indonesia for the latest LFC World roadshow, presented by Standard Chartered.

Upon arrival, they were greeted with a traditional welcoming ceremony - Palang Pintu - before being asked to take part themselves!

After that, it was time for a spot of lunch and the legends were served up some kerak telor – a spicy omelette dish that McAllister also attempted to cook-up afterwards.

Next, the quartet were given a guided tour around the houses of Setu Babakan and engaged in some arts and crafts, painting an Indonesian fabric motif (batik).

The LFC World Jakarta roadshow runs until Sunday at the Taman Anggrek Mall.

Supporters are invited to a free-to-attend viewing party on Saturday to watch Liverpool’s mouth-watering clash with Manchester United – an event that will include on-stage activity with the legends before kick-off.

There’s also the chance to win prizes and receive giveaways at booths hosted by presenting partner Standard Chartered and other event partners including Western Union, Joie, Konami and Malaysia Airlines, and buy LFC items from our pop-up retail store.

More information on LFC World, presented by Standard Chartered, can be found by clicking here.