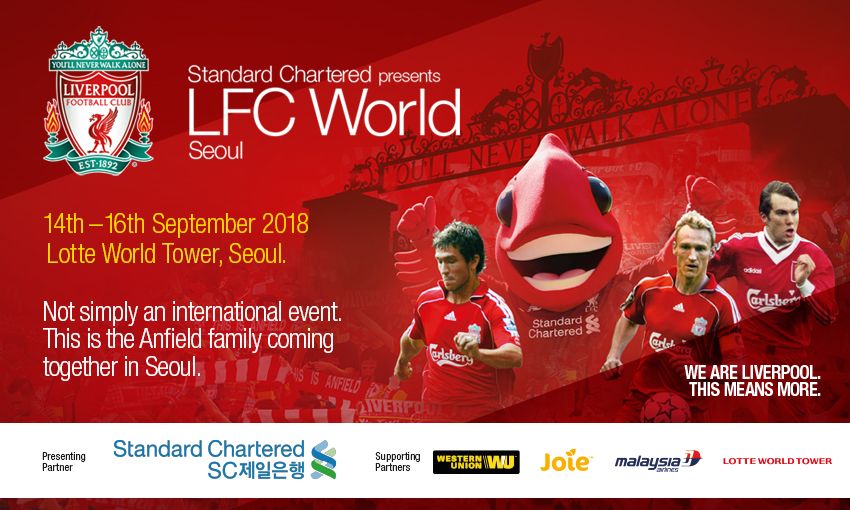 Best ways to travel to and from Anfield this season

Seoul has today been confirmed as the next stop for LFC World, presented by Standard Chartered.

The three-day event will be bringing Liverpool Football Club directly to fans in South Korea and will feature a range of activities that will engage supporters of all ages, providing exciting opportunities to meet former LFC players.

LFC World is now in its third season, having visited eight countries across the globe and meeting thousands of fans along the way. The unique experience will arrive at the Lotte World Tower from September 14-16, 2018.

The event comes as part of the campaign for 2018-19, “This Means More”, which encapsulates the feelings of all LFC fans around the world, the special relationship they share with the club and what it really means to be a Red.

Club legends Sami Hyypia, Luis Garcia, and Jason McAteer will be visiting Seoul. Fans will have the opportunity to meet the former players, as well as club mascot Mighty Red, at LFC World signing sessions throughout the weekend, with activity starting from 12pm each day.

Reds in Seoul will be able to experience and have photos with various iconic recreations of Anfield, such as the Shankly Gates, the 'This Is Anfield' sign and a remake of the dressing room where fans can sit under the shirts of their favourite LFC players – Virgil van Dijk, Mohamed Salah, Roberto Firmino and Sadio Mane - to recreate their own personal image.

They will also have the opportunity to have their photo taken with one of the most prestigious trophies in world football - the Champions League, with LFC having won the title five times.

Fans can experience the drama, scale and excitement through a state-of-the-art VR experience that is the first of its kind. The aid sensory movement, the technology which is used by professional footballers, allows supporters to be virtually transported onto the hallowed Anfield pitch to give them the rush of scoring in front of the Kop.

There will be lots of fun activities for fans to take part in throughout the event and special prizes and giveaways for them to take home from numerous booths hosted by presenting partner, Standard Chartered Bank Korea (“SCB Korea”), and other event partners, including Western Union, Joie, and Lotte.

Not only can dedicated Reds supporters take part in all these free LFC activities, but they can also share the Anfield atmosphere at a free-to-attend viewing party on Saturday September 15 at the LFC World Hub, where they will see the Reds take on Tottenham Hotspur in a much-anticipated game. Live on-stage activity with the legends commences from 7pm, with kick off at 8.30pm.

Hyypia said: “For Reds in South Korea, LFC World Seoul is the place to be. We know not all our fans can make it to Anfield, so this is our way of bringing Anfield closer to them. We can’t wait to meet everyone.”

Ki-Hoon Choi, head of corporate affairs and brand & marketing, Standard Chartered Bank in Korea, said: “Football is a very popular sport in Korea and also globally and Liverpool FC is one of the world’s best-known football clubs, with hundreds of millions of followers around the world. Our partnership with Liverpool FC has helped us build greater affinity with new and existing customers, and at the same time, raise our profile as Korea’s best international bank in the market.

“As a bank that puts clients at the centre of everything that we do, it is our commitment to provide only the best experiences to our clients and I believe bringing LFC Legends and this interactive experience from one of the world’s best football clubs would be the perfect testament of our commitment.”