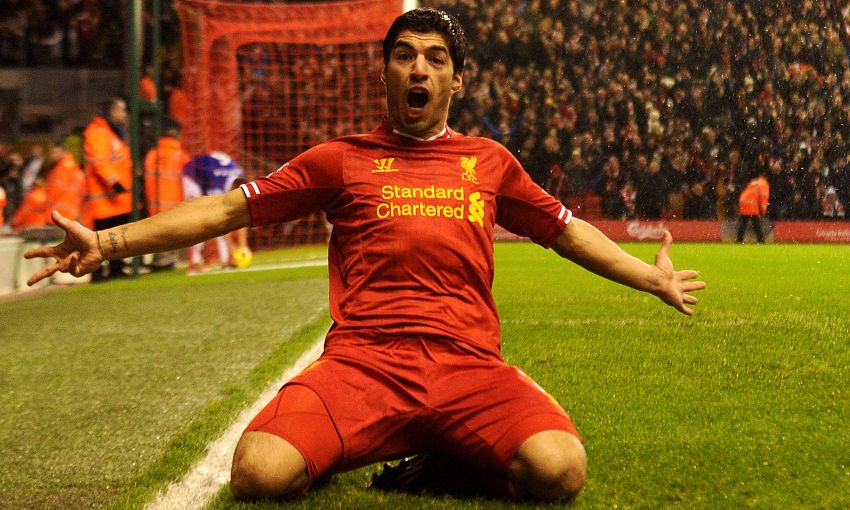 Luis Suarez once borrowed a bigger pair of boots from a teammate to play with a swollen ankle – and shook off the injury to score a free-kick for Liverpool.

The story was revealed in the final episode of LFCTV series ‘Premier League Heroes’, which focuses on the Uruguayan forward’s stunning spell at Anfield and premiered on Wednesday evening.

Suarez, who racked up 82 goals in 133 appearances for the Reds, is famed for his prodigious work-rate on the pitch, with his willingness to use every drop of energy in the pursuit of victory underpinning the outrageous talent he possesses.

In the show, Jordan Henderson shares a tale that typifies Liverpool’s former No.7.

“Knocks and niggles didn’t bother him, he played through them,” says the captain. “[He was] a real warrior. I never saw him in the treatment room.

“I remember one game, his ankle was that swollen he couldn’t get his boot on, so he had to go a size up in someone else’s boots. He played on and scored an unbelievable free-kick.

“Stuff like that you don’t forget. What he does on the pitch speaks for itself. To line up in the tunnel, it’d give you so much confidence as a player knowing that you were going into a game and he was leading at the top. You would react from him and he would set everything off.”

Henderson continues: “He could make the difference at any point. You could be backs against the wall and defending for your life, and Luis could come up with a bit of magic and get you a goal – that’s the quality he had.

“I think the biggest thing was just the confidence he gave the whole group. When you line up alongside him and you’re on the pitch, you know no matter what happens in the game he could produce anything for you. That gave us confidence as players.

“I learned a lot from Luis as a player and as a person.”

Reds legends Jamie Carragher and Steven Gerrard are among many others who provide their own special memories of Suarez in the episode, which concludes the series.

Watch the show on demand on LFCTV GO, where the previous seven episodes – celebrating the careers of Gerrard, Carragher, Robbie Fowler, Michael Owen, Steve McManaman, Sami Hyypia and Fernando Torres – are available too.