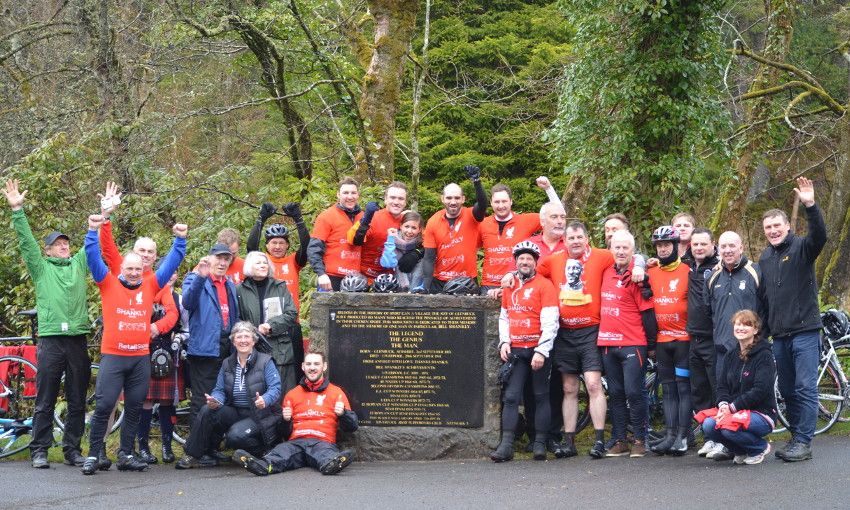 Fourteen intrepid cyclists have raised over £3,000 for charity after completing a remarkable 210-mile ride in honour of Liverpool's legendary former manager Bill Shankly.

The group cycled from Anfield to the Scot's hometown of Glenbuck over the course of three days to raise funds for the Shankly Family Foundation and Glenbuck Football Academy.

Prior to the riders starting their journey on Friday, the club's record appearance maker Ian Callaghan was on hand to give a last-minute pep talk based on his former boss' philosophies on life and football.

And those words inspired the group to battle through torrential rain, freezing conditions, hailstones and even snow to make it to Glenbuck.

Along the way, visits were paid to the Bill Shankly Stand at Preston North End and the home of another of his former clubs in Carlisle United.

As the riders arrived in Glenbuck on Sunday, they were greeted by a lone Scottish piper playing Shankly's favourite song, 'Amazing Grace', as well as the former Reds boss' niece and grandson, Barbara Alexander and Chris Carline.

After a brief presentation at the Bill Shankly Memorial, a football match between the Shankly Family Foundation's U15 team and the Glenbuck Football Academy was played.

With the game ending a 1-1 draw, the Bill Shankly Memorial Cup was fittingly shared at the end of an emotional occasion for all involved.

Special thanks go to organisers John Moran and Tony Bonner for their part in putting together such a successful event.